Home » We are Lyon » Running and wine: my first Beaujolais Marathon

Published: 2019/11/26
Taking part in the Beaujolais Marathon is, I learned, not about running your best time, but getting to the wine stops before they run dry!

And we’d already put ourselves at a disadvantage here by opting for the latter train from Lyon (11:16 rather than 09:45 ) – arriving at 12 and unsure of the location of the start line of the Marathon international du Beaujolais, opting to follow two monks ( because monks obviously know where they’re going!!??) who also were lost and going round in circles for a while.

Marathon du Beaujolais : “a carnival of smurfs, monks on the run, prison escapees and dragons”

When we eventually made the start at 12:15, just in time for the heavens to open up, so rather than starting gently we bolted off in a bid to catch up the other runners and stay warm.

But we needn’t have feared. 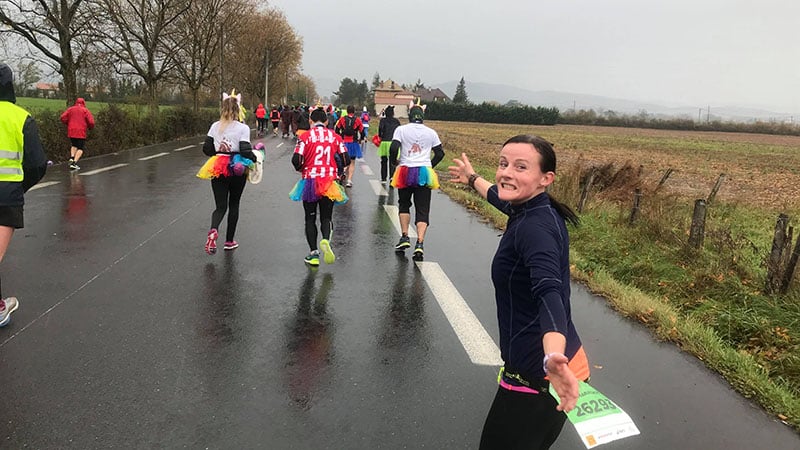 To our delight we soon caught up with a carnival of smurfs, monks on the run, prison escapees and dragons, and a huge amount of men in tutus. At least 80 percent of people were in fancy dress. Around every corner were people to cheer us on or bands and drummers to keep our spirits up.

The first taste of Beaujolais Nouveau

And at 4km in it all began. The first wine station. It was crowded everyone desperate for their first taste of Beaujolais Nouveau – the first wines from the recent harvest.

We quickly drank and sped off on our mission to stay at least not last. Through rolling vineyards, and a multitude of chateaux, with the rain drying up it was really turning out to be a stunning day. My legs tired, but the atmosphere drove me on.

And after a few more km’s the wine stops came thick and fast. “Dépêche-toi j’ai soif” screamed one surf racing to get past us to the bar. A good move as it ran dry just as we got there. But just around the corner, not everyone had spotted, another wine stand. We quickly topped up. 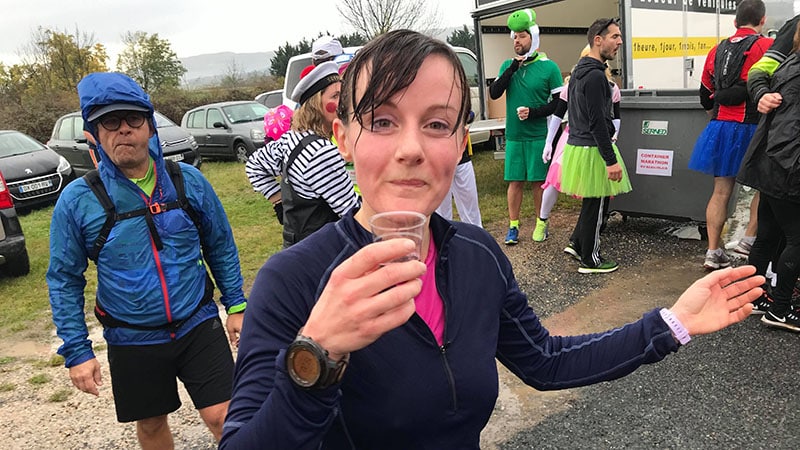 “As we entered several buildings a pure fiesta was underway”

8-9km in I marvelled at the fact I didn’t feel remotely tipsy. Something to do with the exercise cancelling the alcohol?

But I spoke too soon.
My legs began to feel definitely wobbly, not helped by the very slippery mud as we weaved between vines of the beautiful beaujolais countryside.

The wine stops soon became welcome leg rests. And to my surprise, as we entered several buildings a pure fiesta was underway, strobe lights dancing on tables. I felt like I was in an apres ski party. 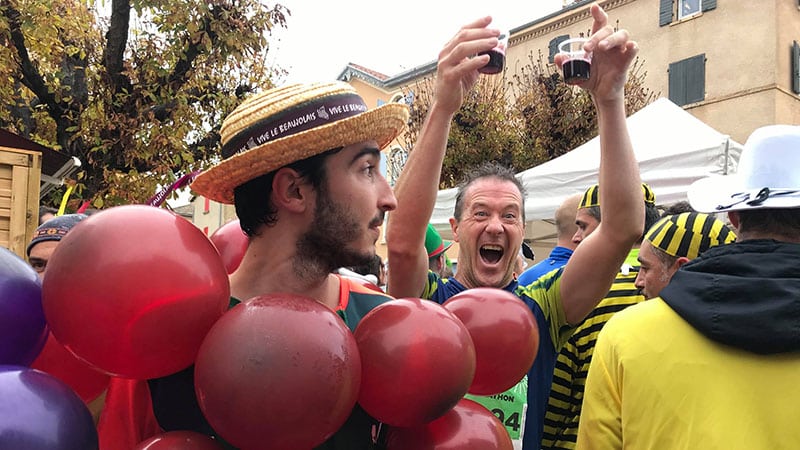 But before you know it you’re 16 km down- then 18, then 20- but even then the wine stations didn’t stop. I definitely felt funny at this point.

But cheers of ‘courage’ and the carnival at the finishing line in Villefranche kept me going … I only wished we had more than 3 hours to complete the race after all that….. for the party atmosphere was unlike any race I’ve ever taken part in. I’ll have to train my drinking stamina a little better for next years edition of the Marathon International du Beaujolais! 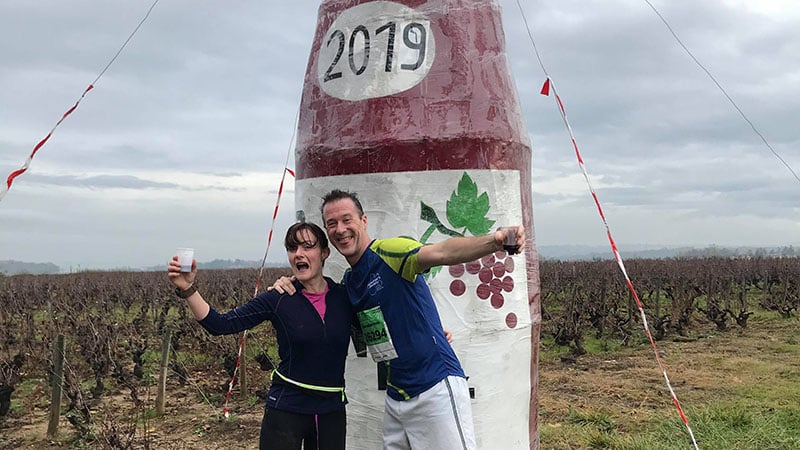 The Top 6 Must Do Stretches for Marathon Runners