Home » We are Lyon » Americans of Lyon: Cast your Vote for the Democratic Candidate of your Choice!

The time has come (and not a moment too soon) for Democrats in Lyon and all over the world to choose the candidate who will carry us on a blue wave to the White House and Senate. Many progressive-minded Americans, in the US as well as the millions living abroad, have been anxiously anticipating the 2020 presidential elections. Many Americans abroad are actively engaging in the effort to defeat Trump. There is a group of us right here in Lyon who make up the local chapter of Democrats Abroad.

With the presidential elections, 2020 is a big year for American politics. American citizens living outside the US, including here in Lyon, can vote in both the party-based primaries and the general election. 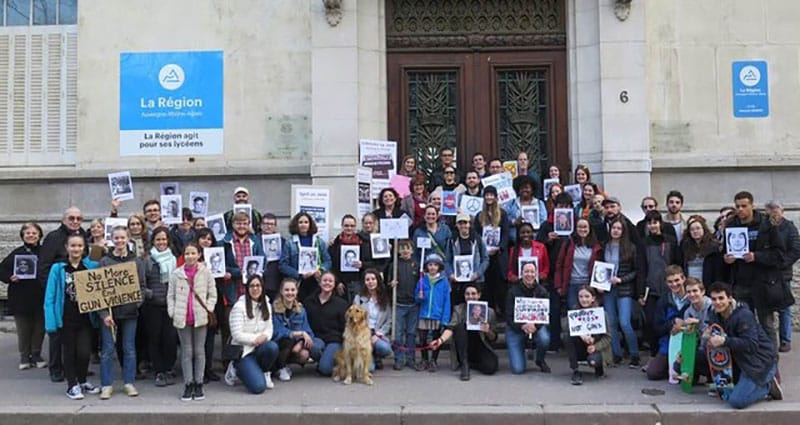 March for Our Lives protest

The process might seem complicated, but luckily Democrats Abroad-Lyon is here to help! Not only can we provide assistance to Americans figuring out how to vote from abroad, we will be hosting a polling place right here in Lyon for the Democratic Party’s presidential primary.

You can vote for your preferred candidate without ever leaving the city limits.

Democrats Abroad’s Global Presidential Primary (GPP) is an opportunity for its members to cast their primary votes for the following candidates who are still in the race to become the Democratic nominee:

The presidential nominee for the Democratic Party is chosen based on the primaries and caucuses in each American state and territory. Delegates are assigned to candidates proportionally based on these results.

As an official branch of the Democratic Party, Democrats Abroad globally sends 21 delegates to the Democratic National Convention in July. These delegates are allocated to candidates proportionally, according to the results of our primary.

Since millions of Democrats vote in the primaries of the 50 states and just tens of thousands vote from abroad, your vote in the Democrats Abroad GPP can count up to four times more than it would casting a state-based absentee ballot, depending on your home state. 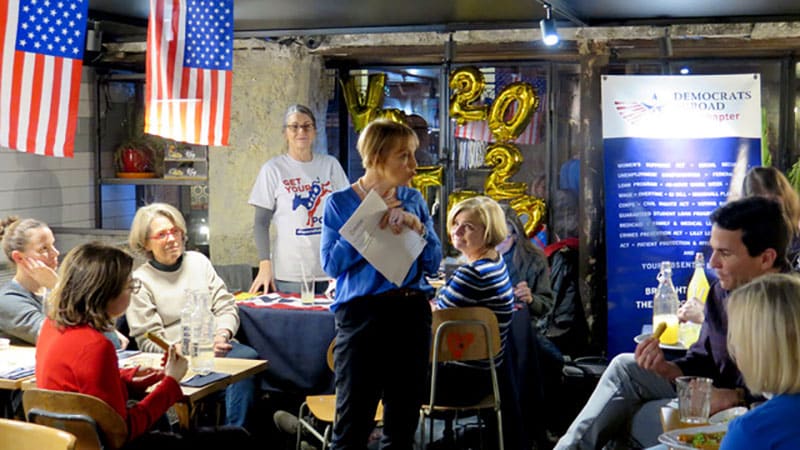 And you can still vote on your state ballot for down-ballot candidates. (If you are not registered for the November election, or have not requested your ballot this year, you can do so at the link below).

To vote in the GPP as a member of Democrats Abroad, either online or in person, you need to be a member (see below for links).

Our Lyon primary will be on Super Tuesday, March 3rd, at Two Amigos restaurant at 11 Rue Terme, 69001 Lyon, from 6pm to 10pm. Members will be available there to assist you with filling out your primary ballot and to help you register for the November election via your home state.

Although the France was one of Democrats Abroad’s first country committees, the Lyon chapter wasn’t established until 2016, in the wake of Hilary Clinton’s defeat to Donald Trump.

That day made political activists out of many ordinary citizens. A handful of dedicated Americans who lived in Lyon decided it was time the American community here had its own chapter.

Now we officially have over 300 members in Lyon, with a big increase during this election year. Our membership is all inclusive, and many cross-generational friendships have been made spanning the spectrum from university students to retirees.

Monthly First Thursday happy hours draw a different crowd every month, including entrenched old timers and many who have just arrived in Lyon. We try to be a resource to our members, not only about political issues but also helping people explore and feel at home in the city we now call home.

Supporting activism for the causes we believe in

While one of our biggest missions is helping Americans living abroad to vote, even in non-election years, we actively support causes we believe in and reinforce the values we stand for as a party, such as taking action on climate change, protecting immigrants, and LGBTQ rights. 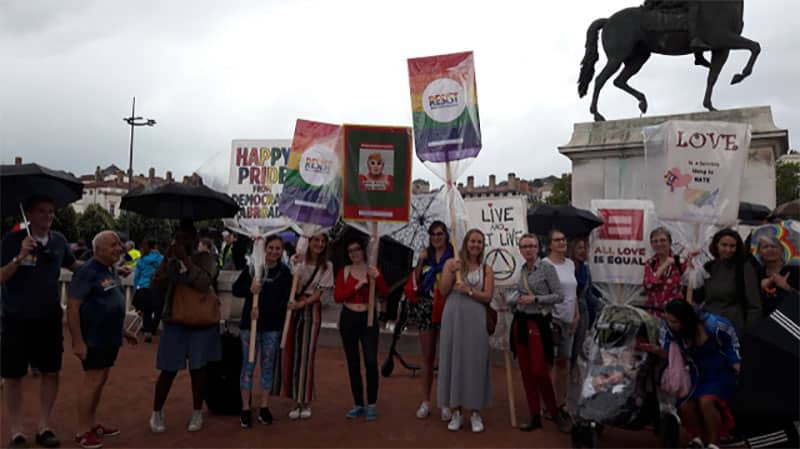 We also advocate for fair and reasonable ex-pat tax laws and banking practices by sending delegations to D.C. to knock on doors of senators and representatives. Recent activities included:

Here’s how to vote for this year’s presidential primary from Lyon, France.

Our American contributor Lindsey shares her experience marching for science on Earth day in Lyon. Her first protest in France.