Our American contributor Lindsey shares her experience marching for science on Earth day. Her first protest in France.

Two weeks ago, on Earth day, I came together with fellow Americans as well as French citizens (and, I imagine, folks from other corners of the globe) to show our support for the scientific community and the work they do around the world.

I met with my group, Democrats Abroad, at the carousel by Guillotière. Even before we had walked a step, it felt unbelievably cathartic to know that we were all there for the same purpose. Despite each coming from a unique background, we were all connected by common goals. It helped me to understand why the French are so wont to march for their beliefs.

We all gathered together around the huge signs put together by the group’s chairwoman; cardstock images and words mounted on heavy-duty wooden frames. As we made our way down the banks of the Rhone and up Rue de la République, these signs were a beacon of what we were all fighting for. They carried messages such as “science not silence” and “I’m with her” along with an image of our planet. 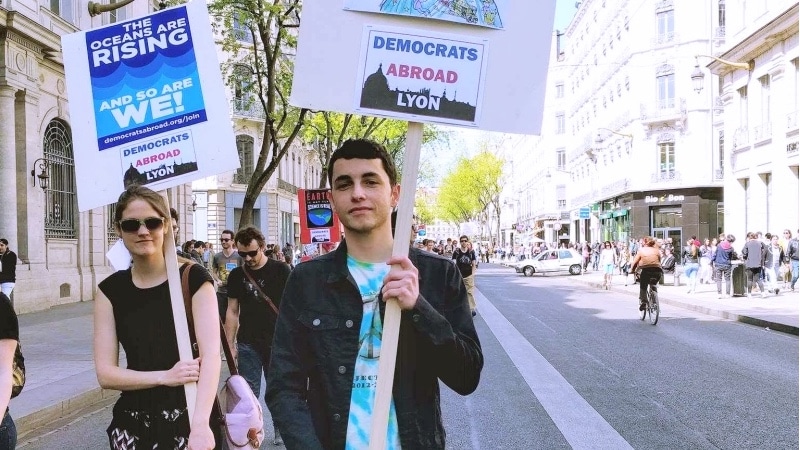 My favorite sign depicted the Statue of Liberty as Mrs. Frizzle from the children’s series about science The Magic School Bus with the words “science not silence.” It was like one of my favorite characters came alive to show her support and march alongside me.

To me, these signs were a reminder that I’m not alone. Even if I became temporarily separated from my group, I just had to raise my eyes and find one of our signs. In every photo I’ve seen of the march, these Democrats Abroad signs are ubiquitous.

Even without the connection I felt to my fellow marchers through our various signs, it felt unbelievably cathartic to know that we were all there for the same purpose.

Despite each coming from a unique background, we were all connected by common goals. It helped me to understand why the French are so wont to march for their beliefs.

Over the past 4.5 years I’ve lived as an expat here, I haven’t had many occasions to come together with other Americans. Part of that is by design, wanting to branch out and meet people who don’t share a passport country with me, but part of it is that I didn’t realize that there were so many of us in the Lyon area in the first place.

I found it fascinating to pick the brains’ of some of the kids tagging along with our group, asking them about all of the places they’ve had the opportunity to live in, how it feels to be the cousin or grandchild that lives overseas, and how they felt about the French school system. I had the opportunity to speak to their parents, as well, and learn the diverse reasons that brought them to this precise location.

I was tempted to write that the social aspect came second to the march itself, but I don’t think that’s quite true. I’ve never before participated in any kind of march or protest, so the whole experience was brand new to me.

That being said, I felt like the social aspect of the march was a huge part of what made it successful. Like many Americans, I felt powerless when the 45th president of my country was elected and proceeded to take office.

I remember feeling in a state of shock, like there was no possible way this could be real. The emotions eventually evolved (or devolved) into everything seeming hopeless. What could anything I did or say make a difference when the person in office was diametrically opposed to every political belief I had?

Being far from home, I couldn’t show support for the resistance by participating in strikes and protests. When I heard that Democrats Abroad was starting a chapter in Lyon, my heart lept. I knew this was my opportunity to join the resistance and maybe actually make a difference.

Actions like the march for science remind me that so many others, whether we share a culture or not, have the same goals as me.

Whether it was the precocious 11 year old who shared with me that she loves being the “cool” cousin, or the older French woman who was marching because her son is a researcher in Boston, everyone there that earth day had something in common.

We might have been walking for different reasons, or come from different backgrounds, or had a different idea of who we wanted to win the French elections, but we were united in the fact that we believe in the power of science and our individual power to inspire change.