A day-long skiing trip to the Alps from Lyon

With the winter season in full swing, it’s the perfect time to head to the Alps mountains to ski and hit the slopes. No car, no gear, no problem. So how exactly do you ski from Lyon?

It’s 6:02 am on Saturday, March 25. You returned to your apartment at 2 a.m. this morning because it seemed like a good idea at the time. It’s 40-something degrees Fahrenheit and there hasn’t been a snow flurry in over a month.

While Lyon doesn’t often get much snow, it is about two to three hours from most ski resorts in the Alps, depending on where you go. 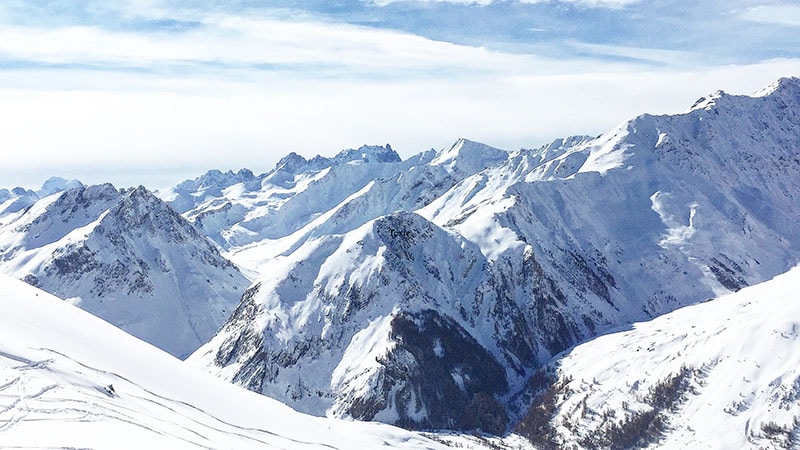 Ski resorts in the Alps are only two to to three hours driving from Lyon.

And for me and my friend Amy, eastern and western U.S. skiers respectively, that was close enough. So it was on this lovely Saturday morning last March that we made the trek in search of higher altitudes and higher spirits.

But like many expats and recent arrivals, a car wasn’t exactly on our list of possessions. Neither was, for that matter, skis, boots, gloves, pants, coats, or helmets.

You name it and we didn’t have it. And when you’re lacking both equipment and transportation, those two hours to the mountain might as well be two countries. So how exactly do you ski from Lyon?

Here’s a quick rundown of everything you’ll need, where to get it, and what to expect.

Where to rent skis and snow gear in Lyon?

A month before we struck out on our own, Amy and I went on a ski daytrip at Valloire put together by our study abroad program.

Because they knew skis and boards weren’t at the top of our list of things to bring to France, they sent us to Loca-Skis next to Jean Macé (Lyon 7th).

This rental shop has skis and boards of all types and sizes to rent for one or more days, and they even stay open late on Saturday and Sunday night during ski season (January to March) so you can return your skis when you get back.

They have a few different ski packages depending on your level, but even the most expensive day-long ski and boot rental is only €27.

Otherwise, you can also usually rent gear when you get to the slopes, or have them hold your gear if you want to ski half a day and board or snow bunny the rest.

To add to the loveliness that is Loca-Skis, especially for us American weirdos who had no ski clothing to speak of, they also rent pants, jackets, and gloves for another €15-30.

As for helmets, I know a lot of people ski without helmets, but I’m sorry, you’re crazy. I happen to like my brain just the way it is.

The bright blue jackets don’t exactly blend in with the crowd, but at least you’ll be warm.

How to go to the Alps from Lyon? By bus.

However, there’s still the issue of actually getting to the mountain. When we went to Valloire our program took us out there, but for our solo trip Amy and I were on our own.

Thankfully, both Magic Evasion and Skimania are companies that offer ski days and weekends out of Lyon.

They pick up in a few places around the city and between the two of them you can get to pretty much any station you want.

We were a little worried when our bus was late and we were standing in a random parking lot near Université Lyon 1 at seven in the morning, but their buses are definitely the best way to get out of the city.

The buses usually leave the city around 6 or 7 a.m. and leave the mountain at 4 or 5 p.m., so you have plenty of time to cruise slopes.

Tickets are included in the ski-day and ski-weekend packages, so there’s one more problem solved. Just don’t forget to grab the ticket from the guide when you get off the bus. Not that we’ve ever done that, of course.

(Ticket pricing depends on which mountain you go to.)

Okay, okay, I know you’re smirking. “Duh, Jenna, of course you need snow.” But hear me out. Apparently in the Alps, snow is NOT a guarantee.

I don’t know how things are supposed to work here, but in the U.S., there’s definitely a minimum amount of snow that needs to be on the trail before a ski resort can open.

Anything less would lead to mud pits, streams, and probably some very angry skiers. The East may have been born from ice but even we don’t ski on grass. The French, however, apparently not so.

Amy and I had looked at a few different mountains before we decided on Les 7 Laux (albeit mostly because it was cheap. Hey, a girl’s gotta eat.) The websites said they were open. The weather said it was cold. The calendar said it was ski season.

So on the day of our trip we hoofed it out to the meeting spot on the outskirts of Lyon with our skis and jackets and gloves, ready for a winter wonderland.

We arrived a few hours later, grabbed our tickets, shuffled up the stairs, and saw…dirt. Everywhere.

We thought it was a joke, assuming there must be more snow further up the mountain. Oh, how we were wrong.

The little snow that was on the ground was more like slush, and as the day wore on it quickly deteriorated. 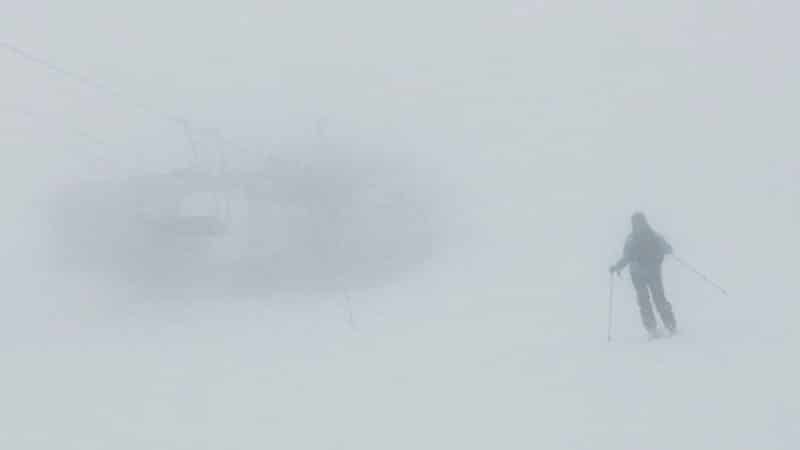 Skiing in the fog…

I’ll take some mud with a side of precipitation, please. That coupled with the crippling fog that rolled in at midday led us to a deserted mid-trail lodge, where we feasted on waffles and hot chocolate while jamming out to folk music with our enthusiastic, and I would imagine bored, hosts.

That afternoon we braved the slope down to the lodge to catch our bus. Surrounded by fog, we noticed the giant chairlift in our path just in time to not smash into it like a couple of deranged pigeons.

Halfway down the mountain the fog eased up, and in place of it came…water. Grey shroud lifted, we were greeted by a veritable stream flowing across the trail in front of us. Water-skiing, anyone?

By the time we got to the base lodge, our legs were burning from the weight of the sticky snow. We threw down our skis, unzipped our jackets, and collapsed on the ground.

And then, because we weren’t already damp enough from the sweat and the snow and the stream, it rained.

Meanwhile, the French skiers around us continued down the hill like it was the best conditions they’d had all year.

And you thought snow was a given.

Weather issues aside, skiing in the Alps truly is an experience you don’t want to miss. They’re famous for a reason, and there’s nothing like high altitude to take you away from whatever’s stressing you out right now. Thankfully, Lyon offers city convenience while being just close enough to take in mountainside scenery on the weekends. And when the weather cooperates, it really is pure and unpolluted bliss.

3 thoughts on “A Beginner’s Guide to Skiing from Lyon”