“Lyon is the center jewel on France’s culinary crown.”

My name is Kiel Bonhomme. I’m a writer and translator from New York City, living and working in Lyon, France.

Where are you from and what are you doing nowadays ?

I am a writer, translator, and entrepreneur born and raised in New York City. For the last five years, I have lived and worked in Lyon.

I moved to Lyon for the opportunity to learn French and to share in discovering a new side of the world with my partner Lydia (originally from Lyon).

I think what most attracted me was the city’s size. Coming from New York, I knew that I didn’t want to be in another world capital, which can often feel too dense even though there are plenty of other advantages. Lyon represented the best mix of being dynamic and full of life while providing room to breathe as well as get out of the city with ease.

I admit that I didn’t know much else about the city besides its food-based reputation. For me, Lyon was and still is the center jewel on France’s culinary crown. I am a football fan, so naturally I had also heard of L’Olympique Lyonnais, which experienced a brilliant passage in the 2000s. Hopefully the team will return to historic form soon!

The number of young and exciting businesses, restaurants and projects popping up around the city. There is something happening everywhere and that stems from Lyon’s passionate citizens who see the city’s potential.

Thanks to the friends I’ve made, yes. At first, I had difficulty adjusting to the speed of life. That might be more of European attribute than it is a Lyonnais one. People take their time, nothing seems forced or rushed. Coming from a city like New York, that meant I had to slow down and not start pacing around the pharmacy while I waited 5 minutes for a store attendant to finish with another client. The way of life in Lyon is naturally patient. You will be taken care of, everything will be fine.

Networking and friend making in Lyon are not always simple affairs, but with a bit of concentrated effort I have found that most people are very open to sharing. I was lucky to arrive in Lyon with my partner who is originally from here. Lydia had a number of childhood friends who remained in the city, which gave us a social scene to integrate into. A lot has changed in 5 years and we have met a lot of vibrant people from different walks of life.

“It is a city for the future with new fast links to Italy, Spain and the UK. In the perfect position for exploring any part of France”.

I grew up playing soccer and have found a couple of groups of guys to play with at Sport Dans La Ville in Vaise. I play in the evenings once a week. I also have found a great private sports coach from the new company Figure Lyon who I see twice a week with a group of others. Two hours away by car are the magnificent French Alpes, so I ski and ski-tour whenever the opportunity pops up.

I recently moved my professional activity into a coworking space in the 6th arrondissement called CO., which is operated by the real estate company Bumper France. There are a few different companies working out of the space, and coffee breaks are incredibly interesting since everyone always has something new and different to share. For any moments when I’m out of the office: for coffee I’ll go to Mokxa in the 1st arrondissement, for lunch I love the Franco-Japanese restaurant Tomo in the 6th, light dinner – le Bistrot du Potager in the 1st, and L’Antiquaire in the 1st for a drinks.

The sights in Lyon are varied and numerous.
I’d start with my neighborhood, the 6th arrondissement near Foch. Parc de la Tete d’Or, the contemporary art museum and then walk down the quai and across the bridge to Opera / Hotel de Ville. From there, we would rent Velo’V bikes and get over to the tramway that leads up to Fourviere.

The view of all Lyon would give them a good look at the city’s disposition and the Rhone & Saone running through the middle down to Confluence. We would take a walk through of the cathedral and meander from there to the amphitheater ruins that are just down the road. I would lead them on a walk down through Vieux Lyon and re-rent bikes to take them to Confluence.
There, we would visit the museum, the shopping center and walk around the new housing. A quick ferry ride along the Saone would have us back up in the city center. I would also reserve tickets to an Olympique Lyonnais match (my dad is a big football fan) to show off the new Stade des Lumieres.

Your friends are coming. Where would you go?

We would probably do most of the same things above with a bit more shopping. I’d show them my favorite independent boutiques: Harper Store in the 6th arrondissement and Summer Store in the 2nd. We would go out to La Maison Mere for some live music or maybe catch a concert at one of the city’s numerous concert halls.

The quality of life and the city’s potential.

I’d bring all of my friends from home here to share how great it is here.

Try everything once, it’s all delicious.

I feel that more and more. In my work as a writer and French to English translator, I have been solicited more and more for local projects and by local businesses. The need to have impeccable English content is a sign that Lyon is gaining more attention from an international audience. I use my website to organize and present my work for these special projects, and I’m happy to know that my services have a real positive impact for businesses around the city. 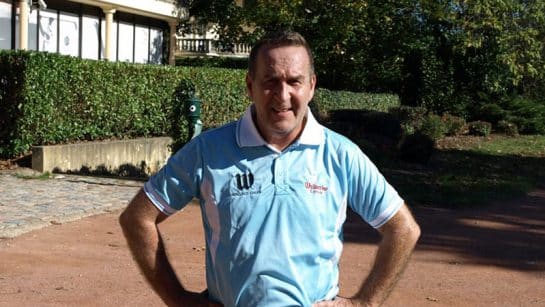 My name is Ian Wilkinson, 58 years old from Wigan in northern England. I’m a former teacher of Physical Education and rugby player.