Come and discover Lyon’s audacious and eclectic Natural History Museum, at the confluence of the city’s famous rivers. 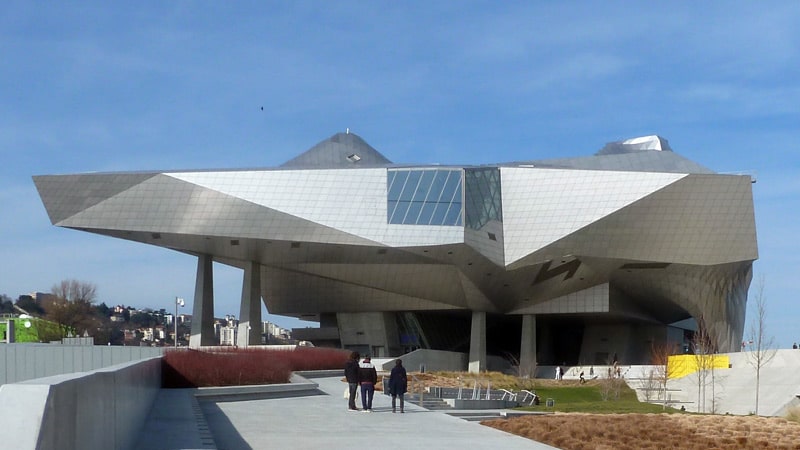 The Millenium Falcon of Lyon

The Musée des Confluences Natural History Museum is the Millenium Falcon of Lyon, located at the southern tip of the presqu’île pensinsular, in the revamped docks between Rhône and Saône.
This “21st century Cabinet of Curiosities” is owned by the Metropole of Lyon, with Hélène Lafont-Couturier running the show. The highly original deconstructivist architecture, dreamt up by Wolf d. Prix and Coop Himmelb(l)au, houses no Han Solo, but an eclectic collection of 2.2 million artefacts covering the earth, life, social sciences, science and technology, most of which were collected by the celebrated humanist of Lyon, Emile Guimet.
Whether you spend two hours or half a day inside, the 5000 square metres of permanent and temporary exhibitions are sure to delight curious minds, both little and big. No wonder 823.000 human beings explored its rooms in 2015, making it the most visited museum in Lyon.

The construction of the Musée des Confluences may have been an endless succession of foolishness, and political and administrative in-fighting, taking longer to finish than a 7-year old building Lego World, but since its opening in 2014 it has reeled in thousands.

The project started way back in 1999 and in 2001 opened itself up to an international architecture competition. Coop Himmelb(l)au from Austria won the crown and in 2003 went about construction. Promoters, however, found out a bit late that the site was unstable and prone to flooding. Thus more money and ground reinforcement was needed. One year later, work began again, but soon a whole lot of bickering commenced between the three companies involved, forcing Bec Frère to pull out, compensation money dished out, and more calls for tenders.
More waiting too. Vinci finally took it on in 2001, built the damn thing, and inaugurated it in 2014, 15 years later, 150€ million over budget.

According to local legend, Lyon’s Natural History Museum came about when someone threw a screwed-up piece of paper onto a table. “Architects have always dreamed of building clouds”, its creator once said, and that’s precisely what this bit of paper is. A voluminous cumulonimbus covered in aluminium, concrete and angular glass crystal. Without a centre, symmetry, or any other controlling geometry, it is far from the classic Beaux-Arts style of the Musée Guimet where many of its contents came from. Whether people like it or loathe it, the Musée des Confluences has become part of the cityscape, challenging passers-by to rethink what architecture has been in Lyon, what it might be, and how it relates to the displays inside.

Who are we? What are we doing here? Where are we going?

Step into Musée des Confluences Natural History Museum and get swept off into a tale of humankind and the history of life itself.
The narratives of Inuit, Aboriginal and Chinese cultures and the civilisations of Asia are interwoven, allowing the visitor to ponder on the beginnings of the universe, with science and the Big Bang only a step away. From meteorites, ammonites, giant mammoths and Jurassic-era behemoths, Man is put at the heart of biodiversity. We uncover the mechanisms of human evolution, man’s place among other animal species, and delve into the human brain. How societies function is next, as we look at how we co-operate as humans, how we compete, how we create. Temporary exhibitions are equally as compelling, renewed on a regular basis.

So despite the madness of its creation, the Musée des Confluences sits weird and wonderful in the imagination of the Lyonnais, proving to both locals and international visitors that it was well worth all that palaver.

Go out on the roof and see the wildest panorama of the city. From the pastel-coloured buildings of Lyon, the upside-down elephant, Fourvière, and the two rivers battling it out, across to the mind-blowing vistas of the Alps.

Come by metro and tram – they drop you off at the foot of the museum. If you’re coming by car, be aware that parking is a nightmare. Try parking in Halle Tony Garnier car-park over the river Rhône.

Have a bite to eat in the Brasserie des Confluences or the Comptoir Gourmand, the lofty and luminous 2 Michelin star establishments, run by Lassausaie and Pignol. Yum is the only word.

Open Bank Holidays: 10am to 7pm

Other museums in Lyon