Where to Find Public Bathrooms in Lyon

Lyon isn’t always the friendliest place for people in need of a bathroom break. We here at This is Lyon like to save you from destroying your dignity (and getting arrested) in a bush, so we’ve rounded up a few options for WC emergencies.

Picture this: it’s summer in Lyon. You’re visiting for the weekend or showing someone around. And it’s hot. So hot, in fact, that you’ve consumed an entire bottle of water on top of that “carafe d’eau” you had with lunch. Thus comes the inevitable, the moment everyone is dreading, when you’re far from your hotel or apartment and a member of your exploration team really, really has to pee.

Lucky for you, you’ve chosen a city full of free, clean, non-sketchy public toilets to see you through…or not. 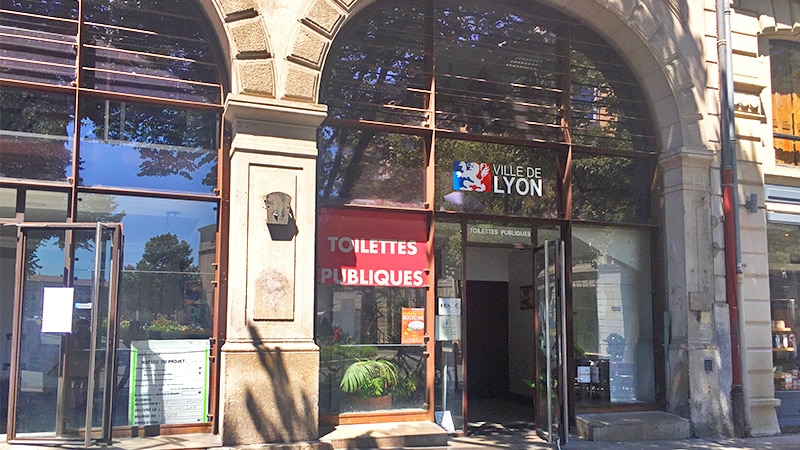 A few of the public bathrooms in the center of town are run by the city, like this one at Vieux Lyon. These are always the cleanest and nicest options. © Careri

It’s true, Lyon is not the world’s most public-bathroom-friendly city. Even in the center of town, where crowds are common and tourism is rife, a public toilet is a rare breed. Urban legend has it there was once a luxury, public “Point WC” on the Presqu’île, but we have yet to see it in the flesh.

So in a city where peeing in public is strongly frowned upon (even 3-year-olds get prosecuted), what’s a desperate explorer to do? We’ve done some research and rounded up the good, the bad, and the surprising public bathroom options across the center of town.

These ones might be the most obvious, and are certainly one of the most used. Located just outside the Vieux Lyon metro stop next to the Cathédrale St. Jean, they’re on a high-traffic route through the center of the old town.

Making our way across the bridge, we come to the tourist office at Bellecour and, surprisingly, a parking garage just a short walk away up Rue de la République.

Like the Vieux Lyon ones, these bathrooms are run by the city and are therefore free and open Monday to Saturday like their Vieux Lyon counterparts. The ones at Parc République are particularly impressive, with separate men’s and women’s sections and a baby change station. 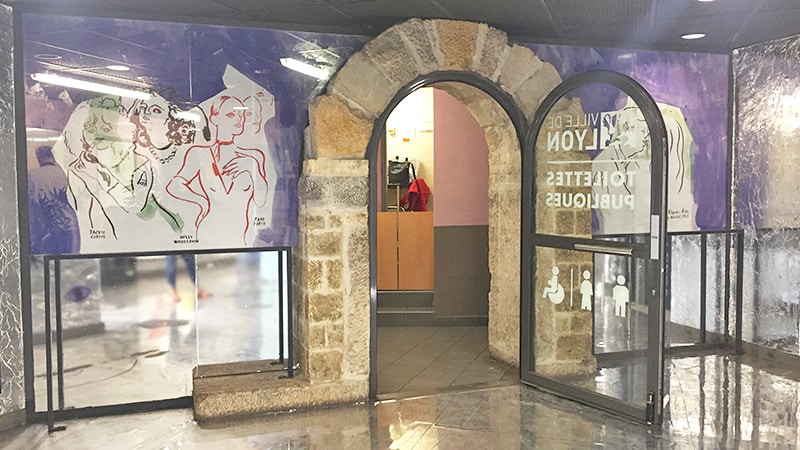 The city-run bathrooms at Parc Republique are less popular than the Vieux Lyon ones but just as nice, especially when decorated with images from museum exhibits around the city. © Careri

Parc République isn’t the only parking garage with a bathroom, either. All the LPA parking garages in the city have them, even if they’re not quite as luxe as those at République. Just enter the garage through the pedestrian entrance and there should be a single bathroom there for 50 cents.

Bathrooms for the Shopaholics

If true public bathrooms aren’t doing it for you, drop those shopping bags and hit the head at Printemps, the one on Rue de la République that is. We heard there were some toilets hidden away on the third floor, so we went to give it a look.

They’re there, tucked away behind a hoard of kitchen gear to suit all your culinary needs. Given that it’s so hidden these bathrooms might be some of the cleanest options. They cost 50 cents and are available during store opening hours, Monday to Sunday from 9:30 a.m. to 7:30 p.m.

We would recommend you at least “faire semblant” to be shopping, as they did just provide you a dignity-saving commode. Check out that kitchen section you walked through, or follow in the footsteps of our writer and head straight for the shoes.

Up the Presqu’île and into the Past, For Better or Worse

Fancy testing out a little Turkish toilet action? Toilets aren’t easy to find in the most frequented areas of the Presqu’île, but get a little higher up and the Bellecour-Vieux Lyon area looks like a loo Eldorado. 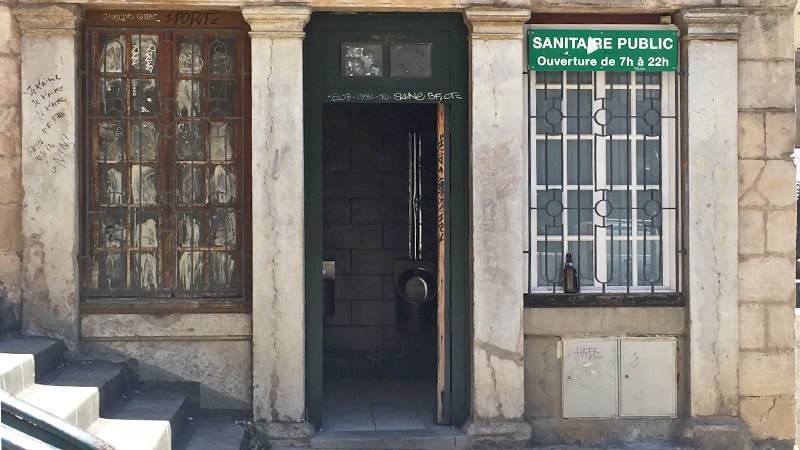 The old “Sanitaire Public” at Place Sathonay is one of the more rustic options in the center of town, but serves its purpose when absolutely necessary. © Careri

Up past Hôtel de Ville there is one public bathroom we know about, at Place Sathonay. It’s old, Turkish, and best reserved for desperate moments of weakness, but it’ll do in a pinch. The good news is it’s free and open 7 a.m. to 10 p.m.

Out of the center

The farther out of the center of Lyon you get, the harder it is to find a bathroom. There are some options to get you by, but if you can find your way to one of the city-run public bathrooms we highly suggest you do that instead. If not, here goes nothing:

Parks around the city usually have some sort of public bathroom, whether that be a “sanisette” like those lining the quais or a larger set-up like those in the Parc de la Tête d’Or.

Be warned, though, park bathrooms are less frequently cleaned and often quite disgusting. This goes double for the ones in the Parc de la Tête d’Or, which is Lyon’s busiest park and receives about 3 million visitors per year. We’ll let you do the math. 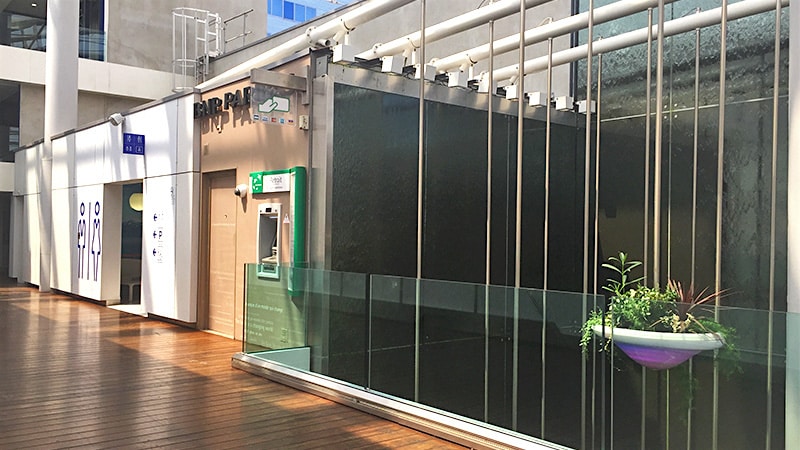 The public bathrooms at the Confluence shopping center are free, clean, and even come next to a waterfall feature. © Careri

Speaking of the sanisettes, you can find these little pods along the quays of the Rhône and near parking lots, parks, and playgrounds around the city. The one important thing to keep in mind is that they lock at night, so if you’re enjoying the quays by Guillotière in the wee hours of the morning you’ll have to find another option.

Indoors, the train stations and malls also have bathrooms. They’re usually just as nice as the city-run public bathrooms outside but do cost money. Confluence and the Perrache are free, while the Part Dieu shopping center is €0,50 and the Part Dieu train station is €0,80. For shoppers, travelers, or anyone at the periphery of Lyon’s main arrondissements these are always a good option.

Still struggling? Check here for an interactive map of public toilets in Lyon and elsewhere.