Lyon Festival of Lights: how it all began

What has now morphed into the internationally-flavoured “Lyon Light Festival” was once upon a time the very local “Fête des Lumières”. This Lyon tradition has bounced down the generations since the middle of the 19th century. Nowadays, renowned masters of lighting may come to dazzle and jazz up buildings and historical monuments, but at the very beginning, it was the simple Lyonnais who lit up their city with tiny, flickering candles, every 8th December. 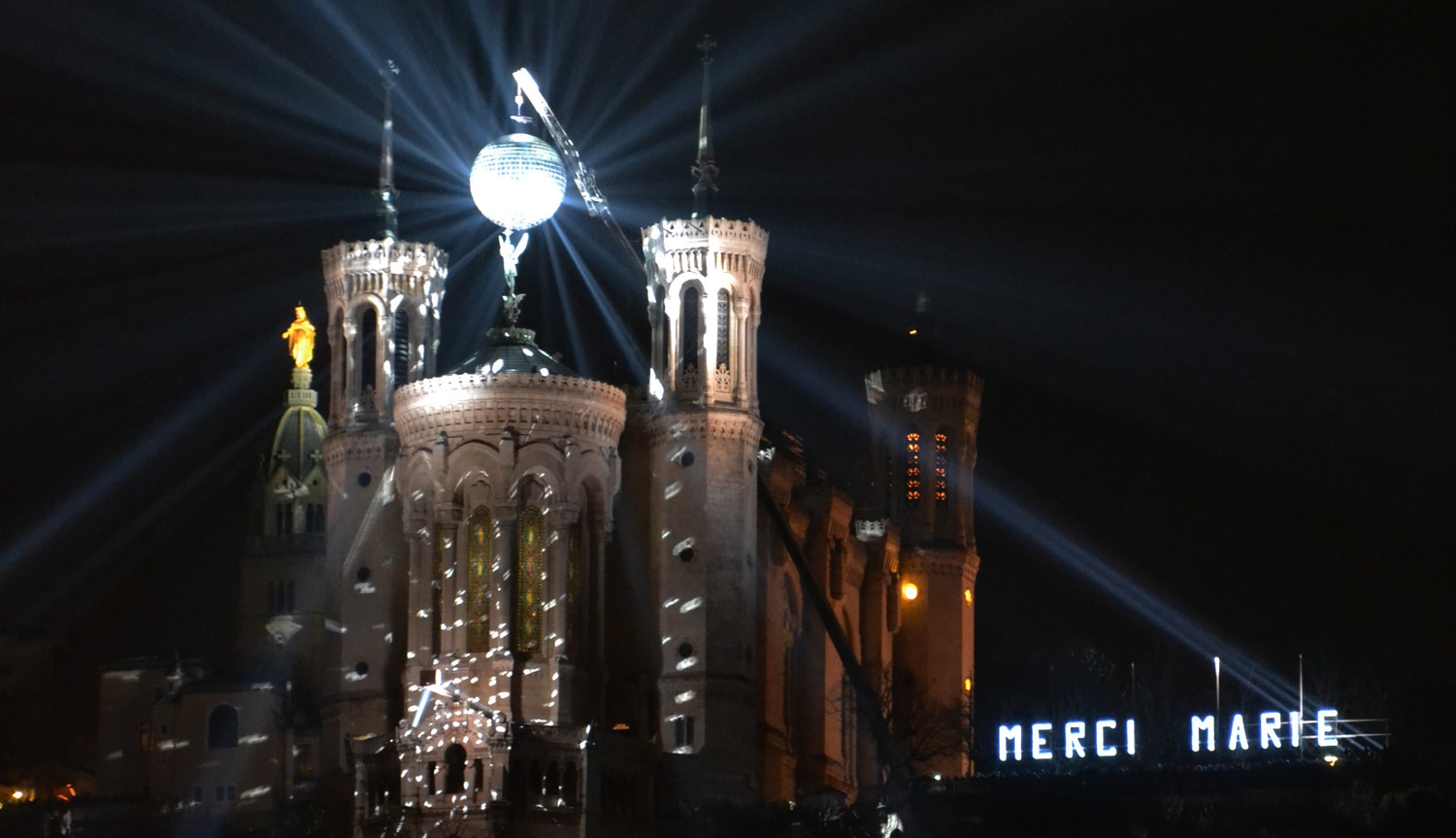 The first illuminations date back to 1852, in homage to the Virgin Mary.

Every 8th December, a few flamboyant letters “Merci Marie” are to be seen at the top of Fourvière Hill. The Festival of Lights came into being because of the Lyonnais’ devotion to the said Lady. In actual fact, Virgin Mary groupies go back as far as the Middle Ages, according to historians.

The very first “Festival of Lights”

The first light shows took place on 8th December 1852.
That day, religious folk were getting ready to inaugurate the bronze statue of the Virgin Mary, placed upon Fourvière church. Curiously, this was supposed to have happened three months prior to this date, on 8th September, to mark both the Nativity of the Virgin as well as the local ceremony of gratitude where councillors would thank the Virgin for having saved the city from the Plague in 1643.

But on 8th September 1852, the Saône river burst its banks and flooded the workshop of one Joseph-Hugues Fabisch, the all-important local caster. The inauguration was then postponed to 8th December, the day of the Virgin Mary. 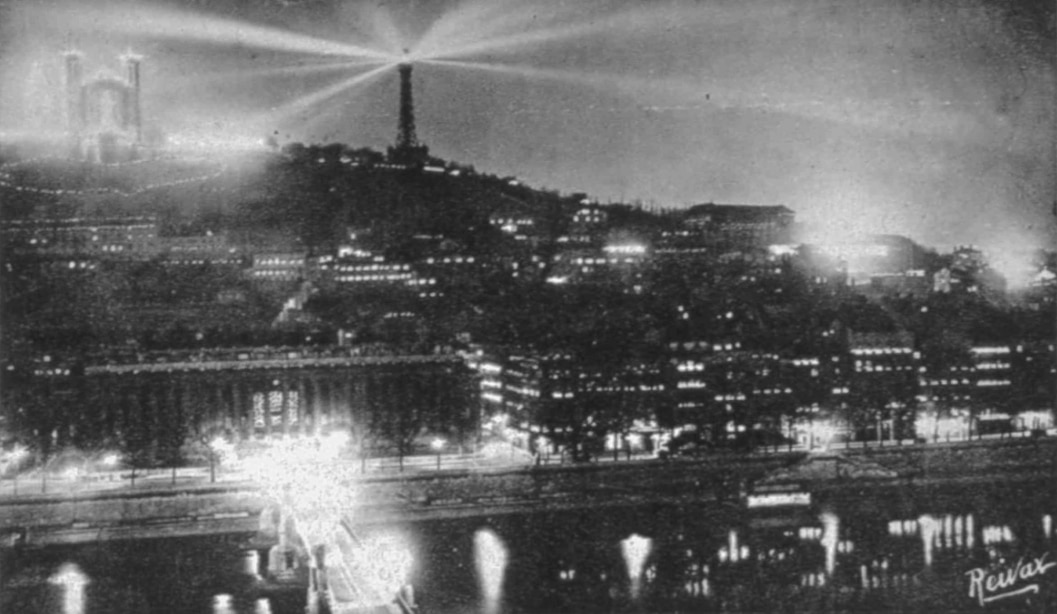 But the sky had yet another say in matters. A storm broke out, the fireworks were cancelled, together with the light display on Fourvière and in the city itself, and Cardinal Bonald had to postpone the inauguration once more. But at the end of the afternoon, the storm calmed and the sky made way for a rainbow. Despite festivities being cancelled, the people of Lyon decided to light candles (lumignons in French) and pop them on their windowsills. They then took to the streets to admire the show.

“Suddenly, outside a collection of unknown windows, lines of fire appeared… The city was ablaze in an instant”.

This wink of faith has carried on ever since – the Lyonnais having made it their tradition to wander the city and admire the lights. In a century and a half, “the 8th December has turned into a mini 14th July, locally-made”, according to historian Bruno Benoît.

From 19th century candles to a world-class festival of light.

Over the past 15 years, Lyon’s lights have become a world renowned tourist event.

Once just for the people of Lyon, the Festival of Lights is now a major event, attracting close to 4 million visitors every year. With such a festival to its name, Lyon is now seen as being one of the rare cities capable of organising a worldwide gathering, alongside such events as the Rio Carnival and the Munich Oktoberfest.

Until the 80s, the 8th December was an occasion to walk the city streets to discover the multitude of windows lit up by candles.

From the 90s onwards, Lyon council began to light up the city’s bridges and buildings. Then in 1999, the Lyon Light Festival was created. The event lasted for four days with street parades and spectacular light shows projected onto the fronts of buildings, born from the brains of lighting designers.

The festival was to be renamed “Lyon 8th December, Festival of Lights” in 2001 by the mayor Gérard Collomb, whose ambition was to make it a must-see tourist event. The budget was multiplied by five and the number of visitors rocketed from one to three million.

The budget was multiplied by five and the number of visitors rocketed from one to three million. More than 70 places are now lit up in the city centre, but also on the banks of the Rhône and Saône rivers.

Lyon and the wider world

The international spotlight now shines on the city. The religious dimension may no longer take centre stage, but still the torch-tight procession towards Fourvière continues to break records, with tourists flocking from both France and Europe, especially Italy which has a Bank Holiday on the 8th.

Religious events during the Festival of Lights.

Hotels are fully-booked months in advance. Some locals even prefer to leave the city during this busy weekend, freeing up their accommodation for visitors, who are more than happy to rent them out. 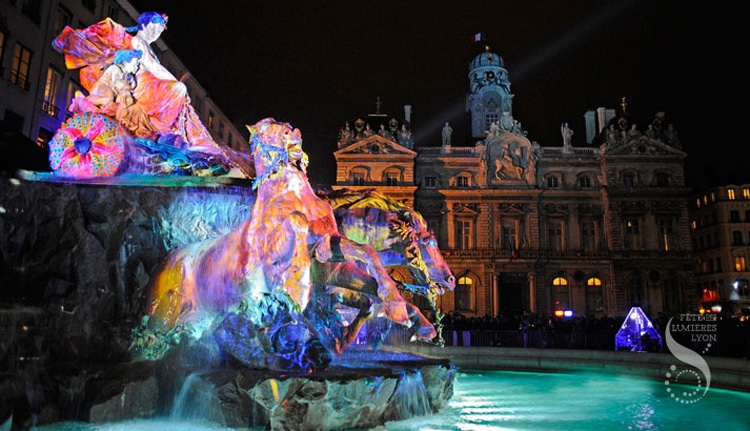 The Bartholdi fountain, place des Terreaux, lit up in 2010

When Lyon lights up the world (well almost)

The Festival of Lights goes abroad…

According to its creators, the Festival of Lights is today an “exceptional showcase of contemporary fleeting light shows.”

Creators from all around the world

Artists, film-makers, designers, plastic artists and technicians from all over, come to Lyon to try out their new creations and techniques, as well as to exchange. City lighting specialists come too.

The first Lyon Light Plan kicked off in 1989 and allowed the city to light up 300 sites and monuments. In 2002, the city of Lyon created the LUCI (the Lighting Urban Community International), an international network connecting 65 cities around the world, which all see light as a way of developing a city, both in urban terms, and economically and socially too.

The Lyon Festival of Lights also coincides with the Rencontres de la Lumière (Meetings of Light) – an international conference on urban light and its challenges – as well as the Light Festival Exhibition for professionals. During these exchanges, the main topic is LED, which lowers the city’s energy consumption by 60% and creates new ambiances.

Lights Made in Lyon

The Lyon savoir-faire in terms of lighting and light events is being exported.

The Festival of Lights has inspired shows as far afield as Osaka, Moscow, Rio de Janeiro, Geneva, Leipzig, Glasgow, Turin, Canton in China, Medillin in Columbia, Gwanju in South Korea, Helsinborg in Sweden, Lodz in Poland, and Gand in Belgium.

A few days after the attacks in Paris on 13th November, the Lyon authorities decided to cancel the 2015 Festival of Lights for security reasons. Only the fronts of the buildings of Saint Jean, along the Saône river, were lit up, in memory of the victims, whose names were projected onto the walls. The Lyonnais were asked to light even more candles and put them at their windows on the night of 8th December. More than 200.000 candles were sold and given out in schools as a sign of solidarity.

The 2016 Festival will take place under exceptional circumstances. The Lyon municipality has decided to let the Festival go ahead, but it will be organised differently to ensure utmost safety for visitors. “By letting this people’s festival go ahead, we’re showing that we stand strong,” says Prefect of the Rhône, Michel Delpuech, in charge of public safety. The Festival will last just three days, from Thursday 8th to Saturday 10th, instead of the usual four days. The general public will be able to see the light shows from 8pm to midnight (as opposed to 6pm previous years).

“We’ve got ourselves a beautiful Festival of Lights this year, one which is in-keeping with tradition. It isn’t going to be a minimalist Festival though. The Lyonnais and tourists will be able to see last year’s shows but in a reduced surface area” says Lyon’s Mayor, Gerard Collomb

A giant fan-zone and a drone

For the 2016 Festival of Lights, organisers have been inspired by the Fan Zone set up for the Euro 2016 Cup. The light shows will only be on display in the city centre (presqu’île), the heart of Lyon, and the old area (Vieux Lyon). This area will be protected by security barriers, and visitors will be able to enter the Festival through 42 security checkpoints, whereas festivals before had always been open, with light shows outside the city centre. 200 security guards and police will be there to control and search the general public. You’re going to have to be patient to take part in the Festival this year!

400 members of the police force will be on-site for the event, as well as Swat teams, and 60 soldiers will be guarding the perimeter. The French Airforce has also provided organisers with an observation drone to keep an eye on crowd movements.

But will the crowd be coming? “We hope to attract the maximum amount of people. Come to Lyon for the Festival of Lights!” says the Mayor of Lyon. Municipal authorities however remain pragmatic and predict fewer crowds than previous years.