Lyon’s Musée des Tissus: Home to one of the world’s greatest collections of textiles and fabric

Discover the history of Lyon’s powerful influence on the textile industry at Le Musée des Tissus. This museum is home to an international cultural gold mine, filled with hundreds of thousands of textiles from Lyon as well as from all around the world. A great idea of visit for fashion lovers.

Why Lyon in the capital of silk?

Lyon was Europe’s center for silk manufacturing and trade for nearly 500 years. The Lyon Chamber of Commerce first decided to form a museum solely dedicated to fabric and textiles in 1856, and in 1864, the museum finally opened its doors.

Lyon’s Museum of Textiles is home to a collection of over two million fine textiles spanning over a 4,000 year period. This museum holds a global position and is said to rival the textile collections of New York’s Metropolitan Museum, the Los Angeles County Museum of Art, and London’s Victoria & Albert Museum.

In 1540, King François I granted the city a monopoly on raw silk imports to France.

Lyon’s innovations in the mechanization of the Jacquard loom, a device used to weave cloth and tapestry, and the development of fabric dyeing techniques at the end of the 18th century paved the way for Lyon’s high level of success in the textile industry.

Several Jacquard-style looms are even on display in the museum to explain their history and significance to Lyon.

Lyonnais silk workers became known as canuts during the 19th century when silk production was at its peak in the Croix-Rousse area. Dynastic family businesses led the way for silk weaving production and it is estimated that at least 100,000 looms were in operation during this time.

Even today, Lyon’s textile weaving industry is still very much alive. There are still some traditional weavers that still exist across the city, producing luxury silk as it would have been made over five centuries ago.

Yves Saint-Laurent exhibition at the Musée des Tissus in Lyon

Some Lyon companies such as Tassinari and Chatel even work for the White House. Most of the curtains of the White House have been crafted in Lyon since the 18th century.

The silk and textile industry in Lyon has been an incredible source of income and inspiration for generations. Citizens of Lyon wanted to keep this integral part of their history alive, and so, Le Musée des Tissus was born.

Historians, researchers, and textile specialists consider this museum a renowned institution with one of the greatest textile collections in the world.

Over the span of 150+ years, the museum’s collection has expanded to an estimated 2.5 million pieces, some pieces dating back 4,000 years.

The museum is mainly geared towards the history of European silk manufacturing dating back to the Renaissance. However, they also hold collections that showcase textile forms and production techniques from the Middle East and Asia.

The museum has a variety of pieces, from rare Persian rugs and Coptic tapestries to European costumes and clothing. Visitors also have the chance to see beautiful, ornate garments from royal life and the high society of France.

The silk dresses they have on display are a must-see. The museum holds an assortment of woven silk portraits, curtain patterns, and cloth art panels. The museum also pays homage to some of Lyon’s historic designers such as Jean Revel, Philipe de Lasalle, and Camille Pernon.

Where is the Musée des Tissus in Lyon?

The Lyon Chamber of Commerce and Industry moved the museum to its present location on The Presqu’ile in the Hôtel de Villeroy, previous residence of the Governor of Lyon in the 18th century.

The Museum is near Place Bellecour and the metro (Lines A & D) in the heart of Lyon, between the Rhone and Saone rivers. It is also not far from the Perrache Train Station.

In 2015, the Museum of Textiles was suspected to close due to a lack of funding from the government and the local municipality. 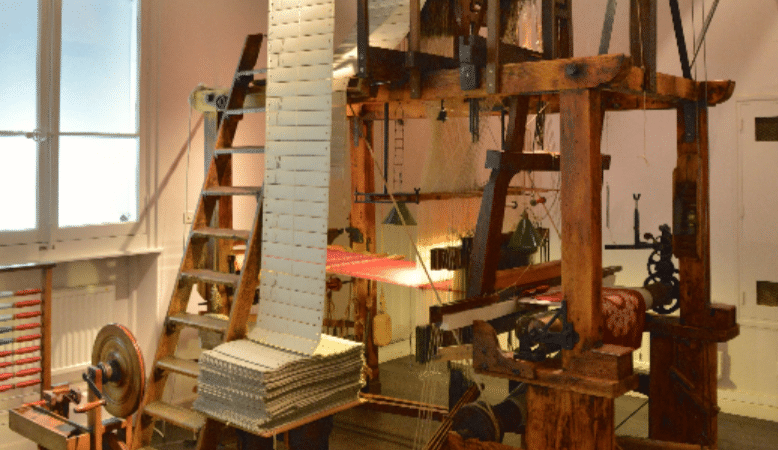 A Jacquard loom at the Maison des Canuts in Lyon 4.

Fortunately, when the Chamber of Commerce turned to others to ask for assistance in keeping the museum open, the Auvergne Rhône-Alpes region bought the museum.

Lyon, an International Center for Textile and Fabric Production

Le Musée des Tissus has become a center for textile and fabric restoration, conservation, training, teaching and documentation. Their library and document department holds an archive of over 30,000 works pertaining to research into textiles and their histories.

Reduced rate for disabled and escorts.

Open from Tue. to Sun.: 10am-6m
Closed on bank holidays

Other museums to visit in Lyon