Published: 2019/07/27
If you’re keen to discover why Lyon is known as the food capital of France, then a trip to L’Auberge de l’île Barbe is a must – Speedboat not neccesary…

By Jez Fielder and Katy Dartford

If you’re going to do something – including being truly decadent in the middle of the week – then you may as well do it properly.

Which is why we’re dressed up to the nines on an extremely warm morning in Lyon waiting on the Quayside to make like a bond film and jet off down the Soane to the gastronomic restaurant, L’Auberge de l’île Barbe (Lyon 9th), for a spot of lunch.

We can hear John Barry in our heads as we watch the speedboat head towards us – battling the swell as it tries to moor. The vessel is piloted by none other than the Chef Patron himself, Jean-Christophe Ansanay-Alex, and room manager, Gaelle, whom he recently married. 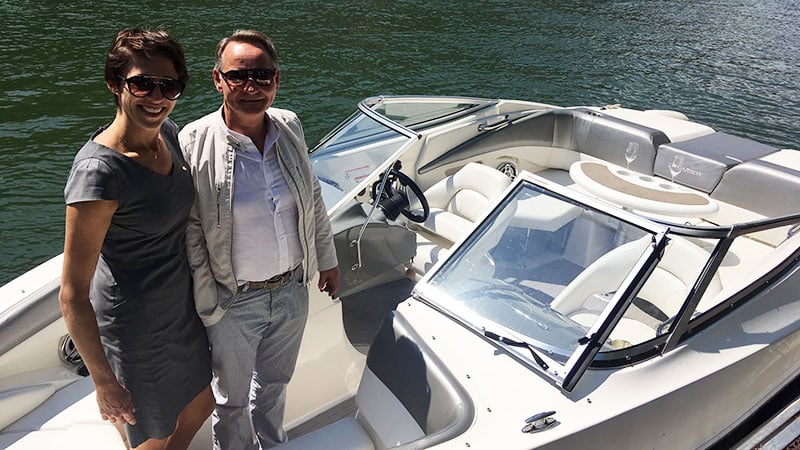 We say hello as we are helped onto the boat and take our seats at the rear on plush white leather. Gaelle asks where we’re from as she pops open a bottle of champagne. England, we say, but we live here in Lyon. I feel quite smug not to be at work today.

Michelin-starred restaurants such as L’Auberge do not come cheap, and often the only way to experience them without longterm fiscal catastrophe is to take lunch, as many establishments offer a cheaper menu for the afternoon sitting that is not available in the evening.

This is why we’ve taken the day off midweek. Lunch is served Tuesday to Friday.
We head off on a 30-minute ride to île Barbe and the 17th century former monastic dining hall that’s now classified as a French national treasure.

Awarded a Michelin star in 1993, Ansanay-Alex’s island idyll is also a member of Les Grandes Tables du Monde. Come for the experience as well as the food and tick it off your bucket list if you’re here to discover why the city is known as the gastronomic capital of France. 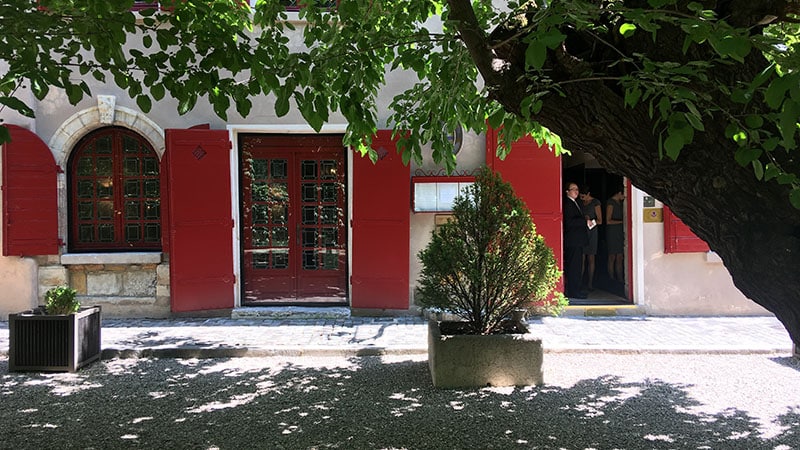 “I had a restaurant in London for a while,” says our host. “But then the crash of 2008 happened and it killed everyone.” It seems he’s found his feet again.

Wind in our hair, the Saône widens as we speed northwards. The city quietens, becoming more residential on both sides. ‘Just remember the feeling’, we say to each other, ‘pretend we’re billionaires for a little while’, and it’s truly intoxicating.

The small island with its craggy circumference and weeping trees becomes gradually more visible. We wave to children playing on rocks as we approach the pontoon where our hosts make several attempts to attach the mooring line.

Soon we are back on dry land and are invited to take walk around the island before lunch.

We do so and it’s the last little nudge we need to be completely up for lunch.
Inside it’s a hybrid of eras; modern chair designs within cloistered walls, oak beams and old window frames. The crowd is mix of ages and styles. A man with extraordinary floral trousers to our right, an elderly couple very fond of cheese to our left.

We find ourselves on an oval table at the head of the room, seated once again in white leather. The picture taken of us looks like we’re at our own wedding, which speedily inspired a number of questions from friends when we uploaded the offending image. 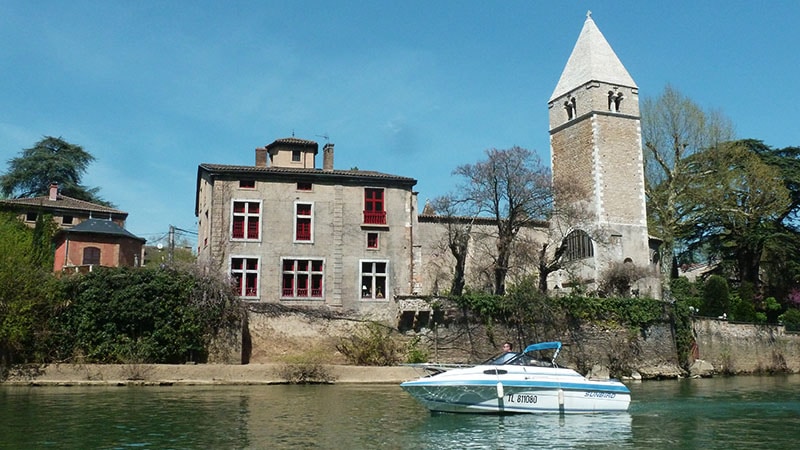 A view on the Île Barbe and its 5th century chapel (Lyon 9th) from the Saône river.

But it wasn’t our wedding, it was just lunch, albeit a very special one.

Discover some of the secrets behind the Chef du patron’s creations.

We eschew the lunch menu despite having planned to take it. Instead we go with the ‘creation’ menu for 128 euros per head, which offers three courses and desserts, plural.

But, naturally, when you put yourself into the hands of a creative force such as Jean-Christophe you will be in receipt of a few surprises. The man himself reappears to advise on our order and then sends out the sommelier.

We go easy on the wine. Not our custom but we’re trying to keep the bill down. A glass of Saint Romain Chardonnay for one, and a glass of Condrieu ‘Lys d’or’ for the other.

The wine is not included in the menu and our choices hover around the 20 euro mark. They are served at the perfect temperature and largely fit the lion’s share of our selections.

A plate of tempura comes out as an amuse bouche with aromatic herbs and sweet potato chips. We’re excited but calmed by the piped-in birdsong we suddenly notice, an aural effect to enhance the ambience of this cloistered summer peace. 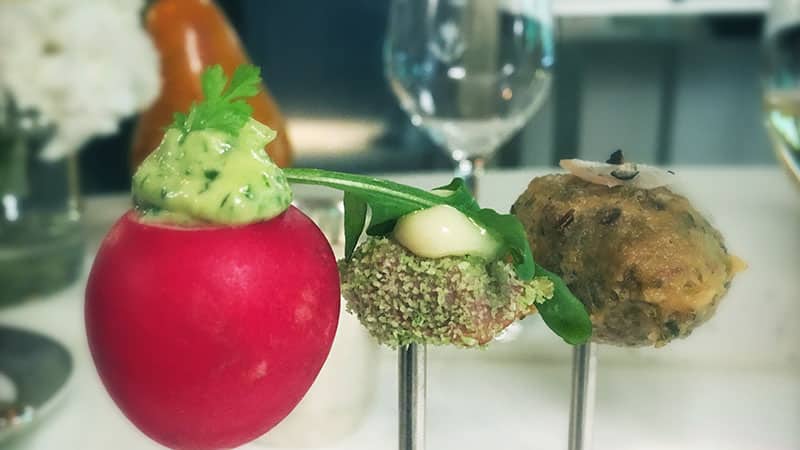 A trio of savoury lollipops

Mint is the champion of this tempura, which we eat all too quickly with an oregano-heavy flatbread.
Then there’s a trio of savoury lollipops. A radish with chervil cream, a chicken oyster and a frittine with lardo so special that it has UNESCO status.

These treats are not only pretty and fun but incredibly delicate to taste. Can we ever have radish again without baying for chervil?

The lady has Chou Farci de Langoustine which possessed a hearty crunch and nestled in a beurre blanc made with wine from the same area as the chosen glass.
Sir opts for the Creme de Risotto aux Cepes at Grenouilles with a garlic nougatine.

Here is flavour consideration at its very best. A dish of many parts: frogslegs, pike mousseline, basil froth, and fava beans. The edge of sweetness provided by the nougatine sparked a bright finish for each mouthful after the initial depth of flavour from the forest mushrooms.
Why it’s worth missing breakfast…

This is a Cep mushroom veloute with steamed foie gras. And what it also is, is a showstopper. This dish has wooed people since the late French president Francois Mitterrand fell for it in 1997. Delicate, rich, light, flawless. 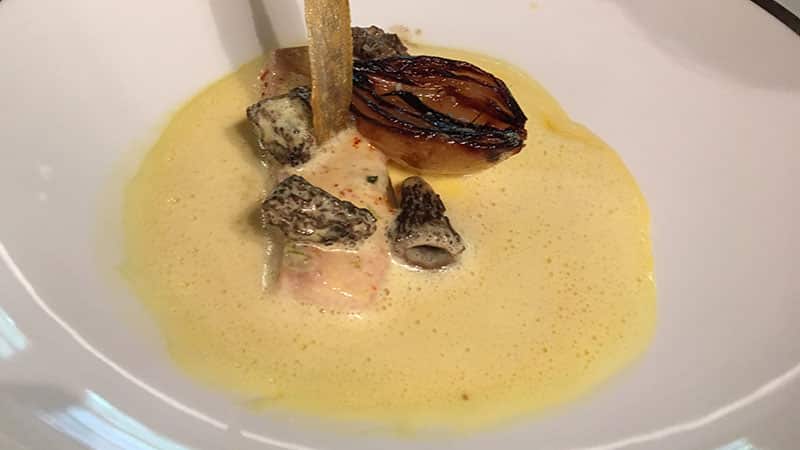 The fish is Arctic Charr, found in alpine lakes. It’s served with its crispy skin and seasonal morels that have the appearance of woollen thimbles, it’s all in white butter with yellow wine from the Jura.

His selection is Ansanay-Alex’s signature dish – Homard à la Newbourg. This dish means a lot to Jean-Christophe, who spends time talking to his guests as his dishes are served, and we’re delighted when he approaches the moment the lobster special appears. But it is no accident, he knows we’re keen to understand his cuisine.

The lobster coulis and hollandaise mix that encircle the central tower of lobster is blowtorched like a crème brulee. It’s marvelous.

He made this dish with his father when they first opened here – and it was the main dish on the wedding menu in the spring of this year.

Gaelle smiles from across the room, knowing how proud he is, and seeing how thrilled we are. The warmth here is not just from the heatwave beyond these centuries-old walls.
There are candles on the table, which is unusual at lunch but adds an air of intimacy. The kitchen in visible but its hubbub is muted entirely by a patterned glass door.

Raspberry souffle with compote of rose flowers follows as we begin to acknowledge how full we have become. But we have to be brave as a canolo with strawberry ice cream and frozen basil is also brought to the table – it’s almost savoury with a tiny dabs of pesto but thrown back into sweetness with glutinous dots of strawberry gel. 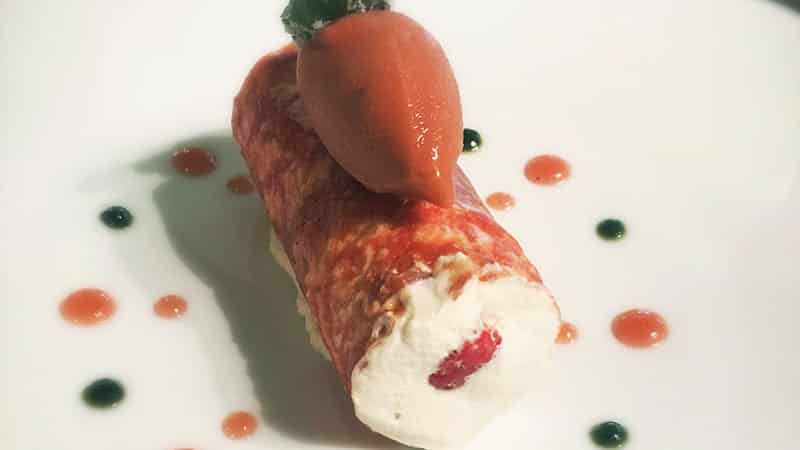 Little sweets round off the adventure and the bill comes in at just over 350 euros, which includes the speed boat arrival. Jean-Christophe and Gaelle warmly bid us goodbye and offer a cab, but we decide to walk back to our part of the city, which takes an hour.

We talk all the way about the food, the room, the island, the boat, the experience. Lunch at L’Auberge is unforgettable, and although we feel less like billionaires soon enough, we live to dine another day and will always be stirred by the memory.