Lyon has a long and rich history and is home to several mysteries, even these days. Here are four legends of this mysterious south-eastern city you probably didn’t know about that’ll give you a really good excuse to spend a day wandering around Lyon.

This island is a place full of mysteries and home to numerous legends.
Located in the north of Lyon on the Saône river, its name derives from the Latin “barba” (i.e. wild, primitive), referring to human sacrifice that might have been performed by druids in Ancient Times before a couple of hermits retired there to build an abbey. 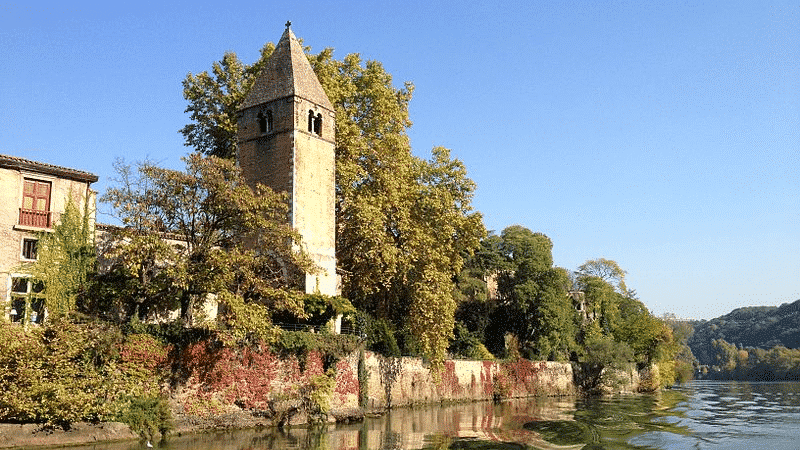 Later, Charlemagne gifted this abbey with a unique collection of manuscripts and religious relics when he named Leidrade, a lettered priest, archbishop of Lyon in 799.

From Charlemagne to washerwomen

Have you ever heard of “Roland the Brave,” Charlemagne’s nephew? He is famous for his death at Ronceveaux in 778, where he died heroically while blowing his horn to alert the army of an enemy ambush (Roland is France’s Boromir).  Rumour has it that his horn was preserved in Ile Barbe.

Historian Léopold Niepce even wrote in 1890 that the monks had a six and a half pound ivory horn, whose inside was painted in red. It was presented to the faithful during the feast of Ascension. Legend or reality?

Today it is said that the horn was conserved by the descendants of Roland but no one knows the true details of its journey. In 1562, Île Barbe was burnt down by the Protestant troops of Baron Adrets.

According to legend, the monks could have hidden a treasure in underground tunnels to protect it from them. But if they did, they hid it so well that no one has found it yet. So grab your pickaxe! Mystical origins, historical relics, a hidden treasure, what more could there be to that island?

Travelers also nicknamed it “island of the washerwomen,” for a pretty deadly reason. Apparently, washerwomen on the island would ask passersby to help them with their laundry, only to drown them in the Saône. And this one just might be true: during the 19th century, many drowned bodies were found in the river.

The Holy Grail in the chapel?

Thankfully nowadays drowned bodies are very rare, maybe because nobody helps the washerwomen anymore; we have the washing machine to thank for that!

Could the legend surrounding this island get any more impressive? Believe it or not, it can!

Île Barbe is rumored to have welcomed the Holy Grail, no less. Indeed, the first chapel on the island could have been founded by a certain Longinus, which happens to be the name of the soldier who pierced Christ’s flank and later converted to Christianity.

La montée du Gourguillon: a tale of Martyrs and the Pope

Gourguillon. What a funny name.
In Lyon, it’s the name of an old paved street that leads from Vieux Lyon to Fourvière Hill, and there are a few theories to explain where it comes from.

Christian Persecution in Lyon in 177

The first explanation for Gourguillon goes back to the Latin “gurgulio”, which means throat, probably as a reference to its shape, or maybe the Latin “gurges sanguinis”, the chasm of blood.

A bit gory, isn’t it? But unfortunately it’s said that during the persecution of Christians in 177 so much blood was shed that it would flow like water down the slope and redden the Saône. So maybe the street deserves that name after all.

A Literary Turn of Phrase

But thankfully persecutions are not the only thing to have happened on this famous slope.

A less bloody explanation for the strange name is that it was derived from an onomatopoeia imitating the sound of raindrops falling on the road.

The third explanation is the most mysterious. On the 14th of November 1305, Pope Clement V was consecrated in Lyon (at the basilica Saint-Just), in the company of the French king Philippe le Bel.

But a wall fell down on the procession, killing a few people including the Pope’s brother and duke Jean II of Britain. The panicked crowd knocked the Pope over and he lost his tiara.

A gemstone fell out and was buried under the rubble. And still is to this day…

Enthusiasts take note! If you happen to take this slope, do not miss l’Impasse Turquet. You will find two houses from the 14th century, the oldest houses in Lyon and the only ones with preserved wooden galleries.

He would have taken hold of Joseph d’Arimathie’s goblet before settling down in Lyon, as supposedly did Saint Anne, mother of the Blessed Virgin, who might have stayed in Ile Barbe. Sounds like Lyon’s got quite the adventure waiting for Indiana Jones…

It’s an enigma that has plagued Lyonnais for centuries. If you want to dig deeper, tread with caution: it cost the Dauphin, son of François I, his life in 1536 as he was supposedly poisoned for getting too close to the solution…

Take yourself to Juiverie street. It’s the Middle-Ages.
The Jewish community has settled in this neighborhood, using the numerous traboules to protect themselves from persecution. Are you ready?

Some of Lyon’s most important families lived on Rue Juiverie, and rumors started to spread about a mysterious and priceless diamond acquired from the Middle East.

Jews could have hidden it somewhere to avoid being robbed of their fortune, so the court took an interest in the diamond and nobles such as Catherine de Médicis started to investigate. 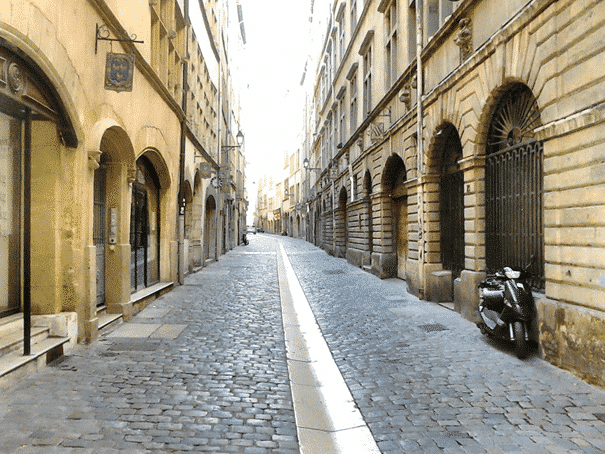 That is, until the Dauphin’s mysterious and sudden death. The doctors of that time, unable to explain it, concluded that he was poisoned and taking with him his claim to the throne and Lyon’s chance to become the capital of France.

The “stone from the Middle East” quietly faded from memory… until a new legend arose.

In the lions’ den

We’re back on Rue Juiverie, but now it’s 1617. Outside number 23, Maison Lantillon, eleven scultped lion’s heads grace the facade, each one slightly different from the others.

According to a legend, a fabulous gemstone lies hidden behind one of those heads. The secret to finding it lies in one of those tiny differences between the heads.

Impossible to not think of the famous “diamond of the Jews” which was never found. But why Maison Lantillon when the Old Town has so many other hiding places?

Because of good old Nicolas Flamel, the famous alchemist who was said to have found the secret of the philosopher’s stone. Any Harry Potter fans here? Welcome to Hogwarts. Your owl will be arriving shortly.

Rumor has is Flamel promised one of his two daughters to a young man from Lyon. His daughter, however, didn’t agree with the match and chose instead to become a nun.

Slightly embarrassed, Nicolas Flamel offered to console the young man by giving him an enigma to solve: a drawing of eleven lions’ heads, aligned on three rows, leading to his fabulous treasure.

When the young man and his friends found it, they used the money to buy a private mansions and decorated each of them with lions’ heads.

According to Flamel, many more treasures must have been hidden by the Jews in the Old Town (around twenty), before they were expelled from France by Philippe le Bel in 1306.

The owner of Hôtel Gadagne even told Louis XIII that he found one of them…A story so beautiful you wish it was true.

The search for eternal riches continues behind the lions’ heads…

Ever heard of the “Gros Caillou” on Croix-Rousse? Sisyphus probably stopped by.

Once upon a time, when canuts still lived in Croix-Rousse, God decided to visit Earth on a cold winter morning. There, He witnessed a heartbreaking event: a bailiff was expelling a canut, his pregnant wife and their 3-year-old child despite their begging.

The family was freezing and left with no place to live. God decided to punish the bailiff and turned his heart into a pebble to show him that he had a heart cold as a stone. 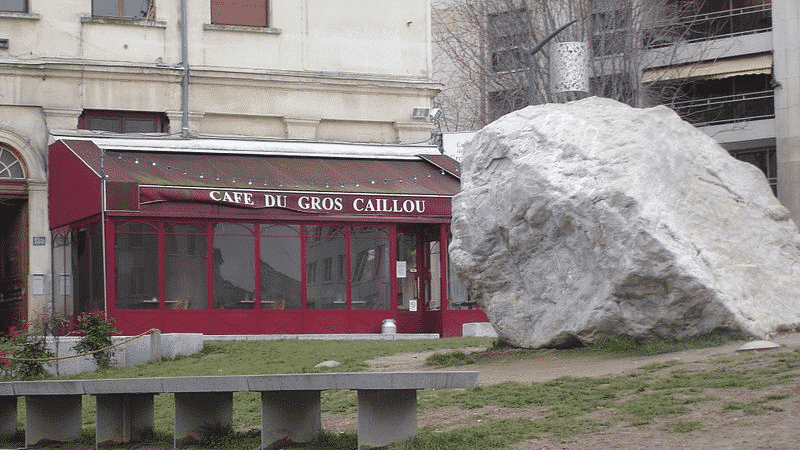 He then ordered him to keep pushing the rock ahead until he found someone more evil than him. The more he pressed on, the bigger the rock would become. The bailiff went down the hill of Croix-Rousse and wandered around the streets of Lyon but no matter how evil the people he met (lawyers, judges, priests, generals…), the rock just would not stop.

He walked for so long that he made it back to the heights of Croix-Rousse and the rock was now enormous, making it incredibly hard to push. Suddenly, when he had given up hope of ever stopping, the rock turned round and halted.

Just then, the bailiff saw a building manager passing by. He had finally found someone more evil than him, back on the hill of Croix-Rousse!

The real heart of the matter

This is quite an amusing tale but the Gros Caillou’s actual story, while less heavenly, is still not ordinary. Its mineral composition tells us that it comes from an Alpine region, 200 km away from Lyon.

It drifted down on the Rhône’s glaciers during the Riss Glaciation (about 140,000 years ago). It was discovered in 1861 during the construction of a funicular to connect the Croix-Rousse with the Presqu’île.

Extracting the rock required huge funds and caused the construction to be delayed. The “Gros Caillou” was kept and displayed as a symbol of the strength and tenacity of the Lyonnais and as a reminder of the connection between Croix-Rousse and Presqu’île.

It has become a meeting place for many Lyonnais and tourists and was even immortalised in fiction through the Six Compagnons, a series of books for children about six boys living in Lyon.

Listen to Our Podcast on the Lyon Legend and Mysteries