Home » We are Lyon » The Art of Playing Pétanque

The Art of Playing Pétanque 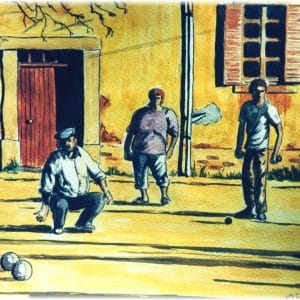 Men. Usually men. With steel balls and a wooden jack. Stood under the southern sun. In berrets and dusty Formula One hats. Blue and white chequered shirts unbuttoned at the belly. Their faces are red, time-worn, marinated in pastis, their hands crumpled. And the odd big-bottomed woman comes along to join them at the village square, to join them in the odd game that is pétanque.

That’s what first springs to mind when I think of the game. A rite for OAPs with nothing better to do. A meeting place for Frenchmen whose wives have banned them from the bar, or kicked them out of the house because all they ever do is lift up their toes for the hoover.

In the village square, free reign for groans and laughter, peeks at all those ample bosoms in flowery pinafores, freedom for getting slowly paraletic. When I spot these improbable humans in the French countryside, I smile. It’s quaint, in an ‘ah, isn’t that quaint’ sort of way, stuff you’d stick on a postcard and send to a relative to tell them yes, it really is like that out here.

But seeing pétanque players in the city is a different matter entirely. Lyon, for example, has often filled me with a disproportionate sense of loathing. Here I am, working, doing my nice little 9 to 5, dismembering myself on a daily basis; head at meetings, arms at supermarket, lungs at the gym, heart somewhere else entirely; and there they are, whole human beings, playing pétanque in a square. On Monday, for God’s sake.

I’d rather not see the leisurely gait of retirement, to be honest, in an urban setting anyway. We shouldn’t have to. It puts us off course. I’d go even further that than, in fact. Old people should be rooted out of the city because the city is no place for them. Just look how they clog up the pavements. Slow down queues. Get flustered in their automatic cars. Ask people for things all the time. Twice. Plus they remind us that we’ve got a hell of a long way to go before we can do diddly squat like them. And that is unfair.

Anyway, as Sod’s Law would have it, I was forced to encounter some pétanque players last week. But these specimens were of a slightly different breed.

So I’m on my lunch break, in the Croix Rousse, a former silk worker’s district turned bourgeois-bohemian, trying to take a photo of the urinals. Just beside the urinals is a makeshift square, framed by wire mesh that comes head height, and amid the fag butts and crushed bottle tops, four people are playing pétanque. My subconscious may have clocked them, but I’m more focussed on the urinals, on how the sun turns the cement yellow and every angle slices shadows onto it.

And along comes Philippe. He bounces, long-haired. Obviously he thinks I’ve been taking photos of them playing and I know what the French are like with their intrusion on personal freedom stuff, but it wasn’t of them, it was of the urinal, damn it, I prepare myself to retort. Instead of spitting on my camera though, he invites me to play. Stumped, I am.

Hang on a minute. No beret, no chequered shirt, oodles of eye liner, hell, he’s a bloody Goth. 25 max. He introduces me to Mag, Simon and another guy whose name I didn’t catch. They’re all in black, Taliban beards – apart from Mag – palms clicking two metal balls. I’m assuming they’re unemployed. The working young don’t have time for this.

I tell them thanks but I’ll just sit on the bench and watch, if they don’t mind. I get out my damp tuna sarnie, start to feel the sun edge over my cheeks.

Philippe throws the fluorescent pink jack way up. Pretty damn far in fact. It plops down about 7 metres away. Straight after there’s a thud. His ball crunches the dirt and goes a little beyond the jack. Not bad, says the nameless dude, his teammate.

“Tu en veux?” Mag asks, pouring hot coffee into the cup of a flask next to me on the bench. I say yes, take a sip. It’s freshly ground.

As Si throws, Mag starts talking. She’s warm but not smiley, a graphic designer who meets up with a few others every week on their lunch break. Si’s a psychology student, Philippe paints and the other one’s job I didn’t get. Maybe it’s because I freeze when I’m in front of the drop-dead gorgeous. I just see their lips move, don’t take in what they say. Then nod when there’s silence because it seems appropriate.

“Want to try?” the nameless guy asks me.

I tell Mag it’s cool what they’re doing, in the name of cultural continuity, and she looks at me strangely, like she hadn’t even thought about pétanque being a game for the half-dead. For her, it’s just normal. As simple as getting up off your arse if you want to walk.

“Boule devant, boule d’argent” shouts an old boy from the other side of the mesh. He unhooks the catch and comes into the square, carrying a black leather bag. Wrinkles, shirt, ruddy complexion. A walking pétanque profile. He’s congratulating the nameless guy on his throw, because his ball is in front of the jack and not behind it.

“Salut Ben,” the old boy says, putting his hand out.

Then what happens is most strange. Maurice and Ben, fifty years between them, perform a kind of stroke and punch ritual which ends in a finger slide down their respective ear lobes. Blimey. They’ve got a secret handshake thing going on.

“Sure you don’t want to have a try?” Ben asks again, looking over at me.

I think about it, then get my sorry judgemental arse up off the bench. The art of playing pétanque is just to do it. C’est tout. 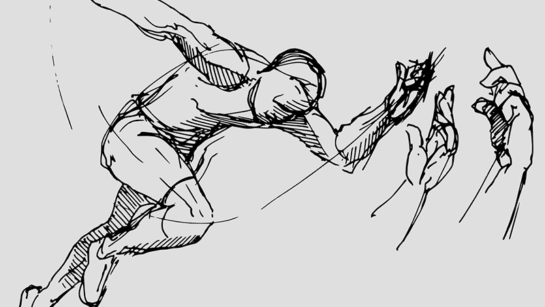 The Journal of an Average Individual #3: 100 metres

Lost in Lyon: Bonjour, Bonsoir and Everything In-Between

Halfway across the world in Sydney, Australia, lies my little home… but here in Lyon lies my heart! I’m Celeste, a 21-year old student studying at Lyon Lumiere II for 2017, and I enjoy making cheesy jokes (see above) and eating cheesy bread. ‘Lost in Lyon’ details my fails at French and my adventures from […]

One thought on “The Art of Playing Pétanque”