The Journal of an Average Individual #3: 100 metres 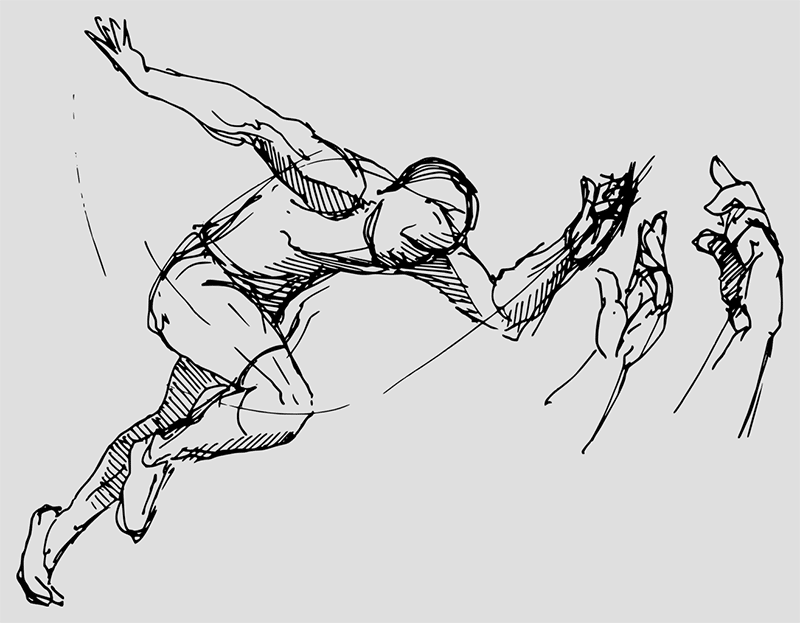 “Can’t you write something nice about Lyon?” Sylvain asked. He’s one of the guys behind This is Lyon, a battlefield of cynicism and positivity.

“Oh I don’t know,” he continued. “Maybe you could write something to make people want to visit the city?”

“A propaganda piece?” I asked, blowing smoke out the Velux window. Man, it was grey outside.

“No, just something, you know, positive.”

I stared into the whites of his eyes. Blinked. Then looked out again at the grey.

“Bon, try your best,” he said, sighing. Then left.

Try my best. Try my best. All of a sudden I was yanked back to the athletics track at King’s School, Ottery St Mary, under the crisp 9am light of winter. I was just about to do the 100 metres.

Pink-faced adolescent animals were either side of me, fidgeting on the spot, gum-chewing, waiting for the whistle to be blown so they could run for that personal chunk of morning glory. In minus God-knows-what climatic conditions.

I didn’t understand the point of it. Well I did, the point was to win, so I naturally must have developed that nonchalant I-don’t-give-a-fuckness born out of an eternity of losing. The fact was, I knew what I had to do, but my legs just wouldn’t do it quick enough. Brain and body were wildly out-of-sync. Like trying to get an emu to tango. And my P.E. teacher knew it. Mr. Jones. Liked enthusiasm, Lycra and a lot of winning.

“Try your best, ok, Katie?” he said, popping the whistle in his mouth.

I walked it most times. Or I ran and closed my eyes, imagining I was sprinting on a salt flat in Utah and a disenchanted Mormon, probably good-looking, was waiting for me at the end to tell me the meaning of life. Once I genuinely tried, I did, but ended up getting elbowed in the face by Sarah Bridgeman, tripping over Claire Driver’s heels and falling face-down on the clay. There were laughs of course, but my reputation had already been shredded and burned months before, so that was just another anecdote to add to my Big Book of Cock-Ups.

And so here I was, sitting in front of my computer at home, ready to write something nice about Lyon, and try your best was making a creaky whining sound in my head. Sylvain hadn’t been in Lycra, he’d been in jeans, but the impossibility of the task ahead was the same.

I looked at the cat. Then at the blank page. Said pff many times in succession. Maybe I could just hand in a blank page. It could give the reader the feeling that anything was possible in Lyon. The blank page of potential. Like deciding not to run at all. Yeah.

I started kneading my face, watching the erratic twitches of the cat’s tail. I fanned my fingers on the desk, began waves of tapping, wondered whether François Fillon had been genetically-modified.

Bum. I wrote. Then deleted it.

I thought about God for a while (my desk looks onto the stained glass windows of a church), performed more waves of finger-tapping – disjointed this time – pushed the cat off the desk. Kerplunk.

On your marks, get set…

Fancy a stab at writing about Lyon in 100 words? Go on…