Published: 2020/03/06
Vignesh, who had a successful stint at La Commune, is now going it alone in Lyon 7, offering traditional South Indian cuisine like vegetable thalis and dosas.

Mum for meat, fish from grandma and dad for crab or prawns.

While many chefs rely on their learning from cookery school, Vignesh’s textbook was his family back in southern India.

The 32-year-old is using this expertise as he opens his first restaurant in Lyon: South Indian Foodie on Grande Rue de la Guillotière (Lyon 7) 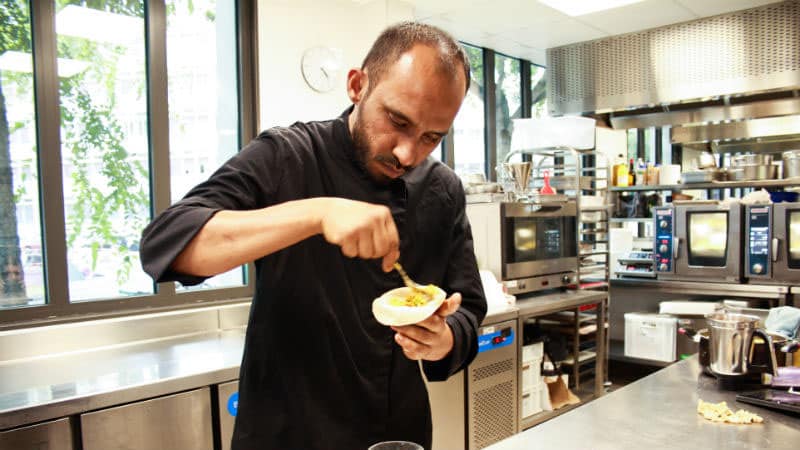 And he believes by serving up South Indian specialities like dosas — crepes made from white lentils and served with a potato masala sauce — and thalis — an assortment of vegetarian dishes served on a banana leaf — he’s found a gap in the market.

“In London, I could easily find South Indian restaurants on Ealing Broadway or East London but in Lyon there is nothing,” he said.

Vignesh, from Madurai, Tamil Nadu, arrived in Lyon in 2014 via a stint in the UK.

But he didn’t fall on his feet initially. Without French, he worked as a dishwasher and helped disabled people.

His big break came from SINGA Lyon, an association that helps refugees and migrants build links in their local communities.

They put him on to La Commune, an incubator near Jean Mace for budding restauranteurs to test their culinary concepts.

“I learned a lot from the other chefs (at La Commune), there was Italian cuisine, Spanish and French and there were chefs who had been in the business for a long time. I was a small fish in a big sea of big fish and it was easy for me to learn from different people.”

After several months serving up his South Indian cuisine there, he is confident his food is popular enough to strike out alone.

However, it wasn’t all plain sailing.

“The first service (at La Commune) revenue was €79 and I came outside and cried and said ‘No, no, no, I’m not going to do it anymore.”

But things rapidly picked up and in the year to October 2019, South Indian Foodie racked up 27,000 customers.

Now Vignesh is hoping some of them will seek him out in the former premises of A la Guill’on dîne.

Closed on Sundays and Mondays.