How to Get Some Bang for your Buck With 10 Free Nuits Sonores Events, May 8-13

Lyon’s celebrated Nuits Sonores kicks off this Sunday with a week of concerts and shows, including some crazy freebies.

If you didn’t grab a ticket to the main events or you’re just looking to save a few bucks, Nuits Sonores Extra! offers a program of free “off” events happening around the city in addition to the main festival.

Here’s a few favorites, to keep you jamming all week long. 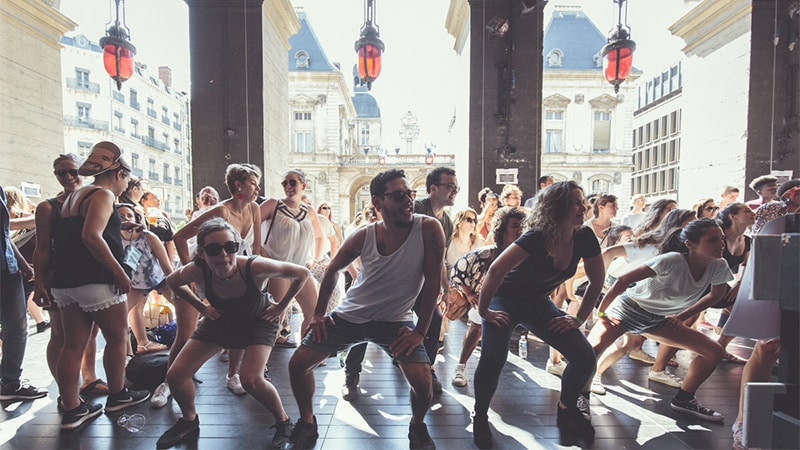 Nuits Sonores is an electronic music festival that takes over the city with music, dance, food, art, and lots of free events. © Gaetan Clement

Kicking off the festival this year is the free family event “Sunday Park.” Held at the Transbordeur, a live music venue housed in an old factory, Sunday Park will take over all four sections of the space, from the main room and the club out to the terrace and parking lot. On the program: rock concerts, DJ sets, food trucks, a football tournament, a flea market, and activities for kids and kids at heart.

Mini Sonore is every kid’s Nuits Sonores dream! 150 kids ages 4 to 12 will be welcomed at the Piscine du Rhône for street art, cosmic concerts, a futuristic hackhaton, costumes, and a party with giant games. Sign up to join in on the fun!

Break out those dance moves for Let’s Dance at Péniche Fargo. The DJs’ best mixes of funk, breakbeat, house, UK garage, and tropical will back solo dancers and teams of two as they battle to crown the “Dancer Master” of the day. No choreography to learn, just lay down your best moves for the win.

It all starts off on a boat so you know it’s going to be good. Péniche Loupika is ramping up the Nuits Sonores energy with aerobics led by Mr. Body, better known as Best Mullet of the Year 2017 and the best fitness coach of Lalaland. The afternoon’s complete with 90s playlists, a Mario Kart and Smash Bros tournament, and house music from Soul Paradise, Mr. Cardboard, and Pony Gang vs. PRISME. 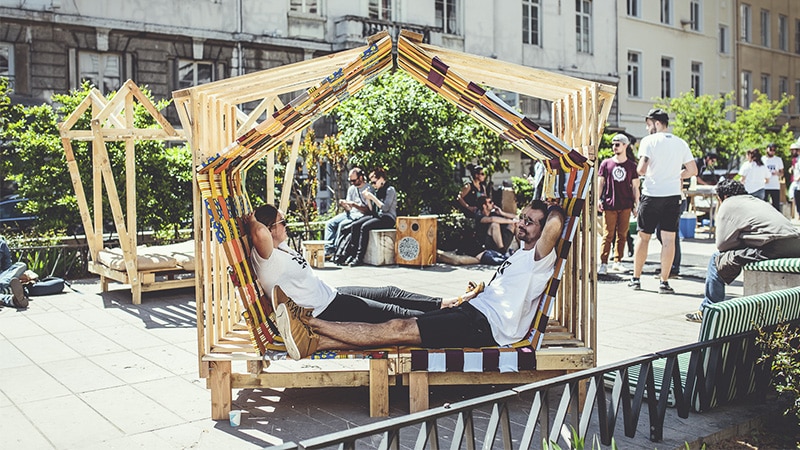 In addition to the music the festival features architecture, art, and design, like the jacuzzi car that will be at La Madone this year. © Gaetan Clement

Not so good at football? How about some foosball instead? La Mondialette is a foosball tournament filled with electro music from around the world. Foosball addict or indifferent bystander, be sure to stop by to refuel with barbecue and a very well-stocked bar!

Got graffiti on the brain? GRAFFITI-PARC is your place to be! The Collège Maurice Scève is permanently closed and about to be destroyed, but not before the artists of Lyon have a chance to tag the school from top to bottom! Paint to music, learn to graffiti with a workshop for the younger attendees, and see pros go to work. The walls might be white at the start, but they certainly won’t be by the time GRAFFITI-PARC is finished!

Bass Save the Queen

London calling to the faraway towns…or to Lyon, at least! Jam out to bass music and twerk with the Queen of England at Bass Save the Queen. We’re talking DJs on double decker buses, fish and chips, vinyl sellers, barbers, and so much more. No plane ticket needed!

On Thursday, the Madone bar is taking everyone straight to the Mediterranean with the jacuzzi car of artist Benedetto Bufalino. Yep, you heard that right. Jacuzzi. Car. We’re talking bathing suits, car washes, and roadtrip playlists full of funk, disco, and house. You’re going to have to see this one to believe it. 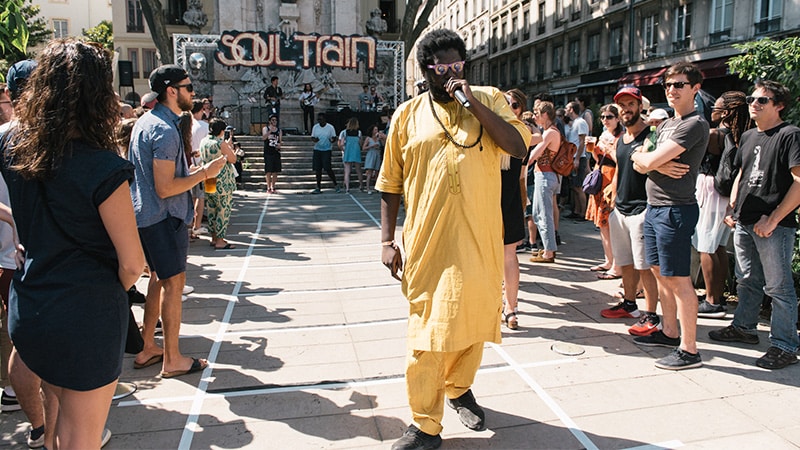 The Nuits Sonores “Off” event Soul Train takes Lyon back to 70s, 80s, and 90s America in an explosion of disco and funk. © Marion Bornaz

Time to get your groove on! After the success of 2017, Soul Train is back, diving into 70s, 80s, and 90s America, afro wigs, mirror balls and all! Come dressed for the disco to strut your stuff down the red carpet and dance all afternoon to the sound of live performances and DJ sets spinning hip hop and funk.

After all those crazy, free festivities, you’ll certainly be hungry, so head over to Le Food Market for some true Lyonnais street food! From lunch to dinner they’ve got you covered with 20 Lyon restauranteurs ready to flaunt their specialties for your enjoyment. Featuring craft beers, wine, live bands, and all dishes at less than €10.