Home » We are Lyon » What We Say When We Say Sorry

What We Say When We Say Sorry 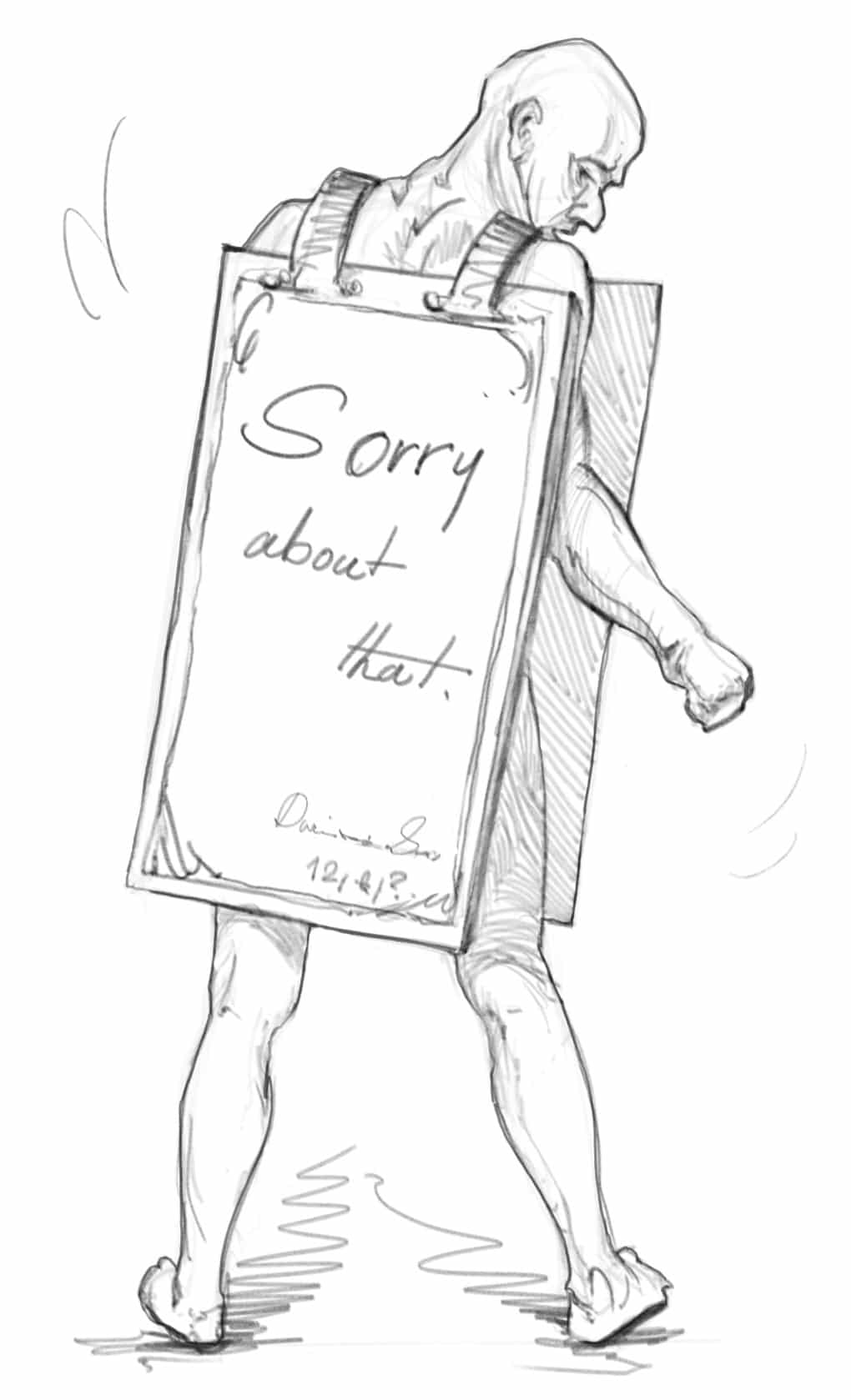 A scream follows a thud. Then the crying comes. I step into the room and observe today’s carnage. I sport three titles today, as parents do the world over – criminal investigator, referee and arse-kicking prosecutor with washing-up gloves on.

One kid – Kid B – is flat on the floor, whimpering. Kid A is standing over her, hands in the air. “It’s not my fault” has been expressed by both parties at different volumes. I try to sieve through the bogey-nosed protests and get some concrete evidence so I can dish out some yellow cards.

“And why did you resort to this specific gesture?”

“Is it true that you bit him?”

“And why did you perform such a cannibalistic act?”

“But were you actually playing with it?”

At this point I suck back a sigh and manage to squeeze in that time-old gem that sharing is important between siblings, within a family unit – however misshapen – as much as it is vital in our contemporary society of unfettered capitalism. Despite the stares, I continue the investigation to uncover the truth and to see some I’m sorrys fly around. A few minutes on, I get to the bottom of it. Just before the bit where they both forget entirely how it all started.

They’re facing each other now. Kid A, three heads higher than Kid B, has said that his sister can play with his red rubber band for 5 minutes per day, tops, and that if his sister bites him again, he’ll call me instead of flooring her. Kid B, three heads lower has nodded three times. First at the biting part, because humans don’t bite other humans. She’s also nodded at the idea of playing more with her own toys and not always stealing her brother’s. She’s nodded a third time for some reason. Hmm.

Each in turn switches on the I’m sorry button and looks up at the ceiling. So I ask them to look each other in the eye, because if we don’t, we don’t mean it.

“Sorry,” says Kid A, looking into his sister’s eyes without meaning it.

“Sorry,” says Kid B, looking into her brother’s eyes without meaning it.

No yellow cards this time. Referee goes back to the washing up. Hands in soap suds, I ponder the I’m sorrys I heard.

“It’s for their own good,” my hairy Fairy Godmother says at the side of the washing-up bowl, “it’s for their own good”. Apologising 10 times a day under supervision of referees is part of growing up, she says. It teaches them to become a citizen. If the ref manage to quell the unrest in their own brains and do an ok job, keep at it, they’ll encourage a kind of reciprocal altruism ethos which each child needs if they want to survive on this planet. Kids will start to understand that saying the hardest word lets them face the crap they offload on others, gets them to question themselves, making living alongside others way smoother. I blink.

The referee could of course hang up the whistle though, chuck away the cards, and let the offspring become arm-pinching anarchists no longer bound by morals and all that malarkey. Tempting.

Because in real life, as we know very well, the referees are almost invisible, apologies come in coats of different colours and rules are broken and stamped on again and again.

I sniff at the hairy fairy Godmother and drown her ever so gently.

A British baby is born and its first word is sorry. Right in the delivery room. After wailing its lungs dry, deafening the anaesthetist and spewing up gunge over the starch white sheets, it turns to its mother and apologises. That doesn’t happen here. French babies swear when they break free of the uterus and into this world. They say putain, though not with the successful emphasis that comes with age and a CV of traffic jams and administrative problems and existential angst under their belts.

I remember when I came to France at 20. I said sorry too much. Not enough putain at all. I apologised to secretaries for bothering them with queries, people whose shoulders I barely brushed in the street, I even said sorry for the bad weather. Kate Fox, author of Watching the English, calls this “negative-politeness culture”. It creates squidgy bonds most of the time, it allows the sorry-sayer to express empathy for the other, but quite often it reduces your existence to atoms, even devaluing the word ‘sorry’ itself.

In France, this kind of behaviour gets you eaten alive.

These are the dudes who have mastered the art of apology. They probably know they’ve done wrong somewhere along the line, but they don’t dig deep, they surface skim. The Artful Apologiser knows the shortcuts to return to the status quo, to get some make-up sex or another reconciliation package for the benefit of themselves. Saying sorry here becomes a reflex like checking your inbox. No genuine empathy of the damaged feeling in sight. Zilch. But ever so effective.

Oh come on, I said I was sorry – The Total Twat

Fine, sometimes the one who’s being said sorry to will milk the sorry-saying phase just to see the sorry-sayer crawl, but often The Total Twat is the Reluctant Apologiser who says sorry because they feel they have to, regardless of whether they mean a word of it or not. As soon as the sorry is said, they want to memory-frazzle the other and backtrack to the position of pre-drama, which means avoiding the grovelling part that shatters the ego.

This happens a lot in France. It’s part of “mauvaise foi”, coined by philosopher Sartre. When you say someone is “de mauvaise foi” (interestingly the translation shows a barren wasteland in English, perhaps because we are all Constant Sorry Sayers) it means they refuse to admit that they’re wrong. Politicians are gurus of Bad Faith. For them, and a battalion of others, from inside banks to on the streets, saying sorry is losing face, it’s messing up the hierarchy which took a very long time to build. They won’t even go there, get close to understanding, nope, you’re just wrong. So non merci, je ne dirai pas pardon.

Kid B is in bed and Kid A is next to me on the sofa, flicking through a book on reptiles. Calm reigns. “Mum, I’m really sorry for pushing my sister over. I won’t do it again,” says Kid A. As apologies go, this is pretty high up there in the ranking, even though I’m not the victim here and the sleeping monster is equally to blame. All evidence points to it. Eye-contact, acknowledgement of responsibility, the naming of what one did wrong, the conveying of empathy and remorse, an offer to repair in order to restore trust and liking. It’s humbling and cathartic being a Genuine Apologiser, it’s even cool.