A week in spice heaven: testing out the online reputation of Lyon’s best-rated Indian restaurants, Part 2 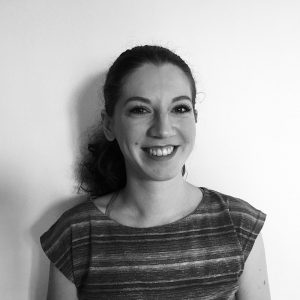 I love international food and I’d have to say that Indian cuisine is way up there in my top 3 favourites. However, the number of Indian restaurants in Lyon is kind of overwhelming and sometimes, it can be difficult to tell the difference between the amazing, the mediocre, and the this-is-definitely-going-to-make-you-sick. I decided to scour the internet, the thousands of reviews and ratings, to create an overall top 5 and test them out myself.

I hope your adrenaline wasn’t pumping too much when I left you at #3 in Part 1: I know it was very suspenseful… Here are the last two restaurants I tested along with an added bonus!

This restaurant is beautifully located, right in the Vieux Lyon, close to all the cute shops and not far from Saint Jean Cathedral. It opens up completely onto an outdoor patio with big umbrellas, perfect for a nice summer’s day.

My order consisted of a set menu at 23,60€:
Samosas
Garlic Naan
Palak Shrimp (made with spinach, tomatoes, onion, garlic and spices)
Bankem Burdha (eggplant, tomatoes, onions, spices)
Halwa (a cake made of semolina with almonds, coconut and custard)

I also had the pleasure of going with my colleague, Jenna Careri, who got Biryani chicken, Bengan Burdha and plain naan for 22,50€.

Be warry: that salad may look innocent but it was the spiciest thing I had tried all week. © Rebecca Wise

The internet did it again, I have nothing to complain about! It’s not even fun anymore, everything is delicious and I am left with nothing to criticize.

In all seriousness, the food was very well seasoned and in proportions that were almost too big to handle, especially if you get a set menu. I had started to long for some heat in my dishes at this point and I got it. Not only do they offer sauces (or condiments, rather) with varying spice levels, but the salad that came with my samosas had a very big kick to it due to the dressing.

Our waitress was very sweet and extremely patient with us, taking the time to repeat any information she had already given but that our heat-fried brains hadn’t quite comprehended. The service wasn’t as fast as the other places I tested but it was still nothing compared to most French-style restaurants. 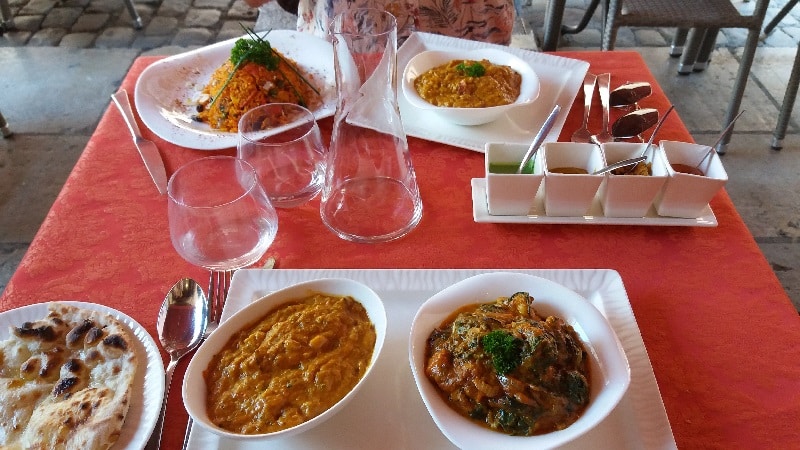 We might have stuffed our faces just a little… © Rebecca Wise

I was set aback by the number of dishes I got in my menu for the price: I hadn’t yet seen the possibility to order a starter, main meal, naan and dessert for so little. The menu may be a bit less affordable if you decide to order courses seperately, however.

That said, the Halwa was… special. We couldn’t quite put our finger on the flavours and kept eating without knowing if we liked it or not. Once again, it wasn’t bad, it’s just a personal preference thing but I don’t think either of us will be ordering it again. 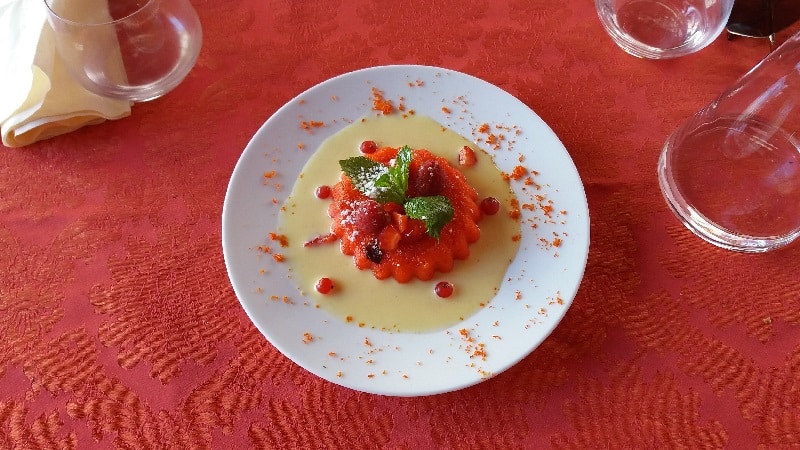 We never did figure out where the red colour came from. A syrup, perhaps? © Rebecca Wise

Our rating: 4 mysterious red cakes out of 5

Ha! Finally! I found a flaw in the internet reviewers’ system, but a good one. The Rose Indien came up as fifth in my list but *SPOILER ALERT*: this was the best one by far!

This restaurant is located in the 9th arrondissement, which people don’t usually think to go through. It’s a brightly-coloured gem, decorated with traditional paintings and bathed in Indian music, where you might get lucky, like me, and be served by the owner, Roland Joseph. 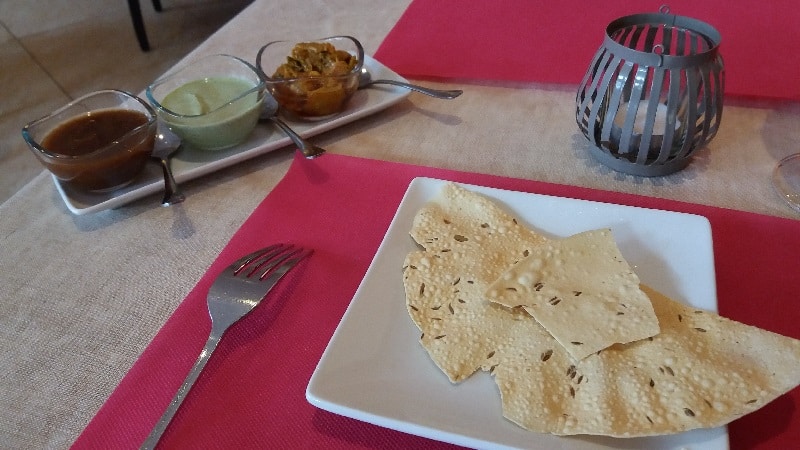 This Papadum was offered with three condiments: a type of sweet and sour sauce, a mint-cream sauce and a spicy, pickle and mustard sauce. © Rebecca Wise

My order consisted of a set menu (Menu du Voyageur) at 28,50€, including:
Samosas
Murgh Makhani (better-known under the anglosaxon name of Butter Chicken, which I ordered again because I couldn’t help myself)
Pulao Rice and Raïta (carrots, cucumbers and cream: it’s a cold condiment, supposed to balance out the spices in your dish)
Mango mousse

I also added Lassoni Naan (garlic and coriander), of course, for 4€ 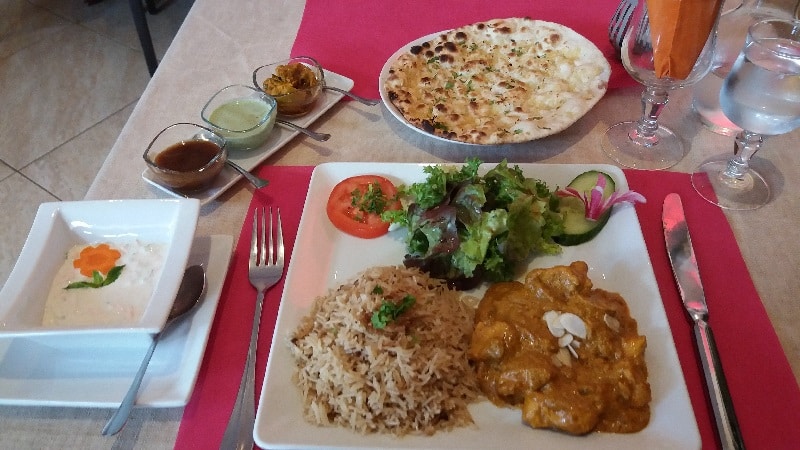 My stomach is grumbling just looking at this picture! © Rebecca Wise

What can I say? This was some of the best Indian food I’ve had in my life.

The samosas were easy to eat and beautifully presented in a thicker (just enough), flaky dough, with a delicious filling. The naan had grated garlic inside of it. The butter chicken was spicier than in other restaurants but still very mild and melted in my mouth. The mousse was like eating a cold, light, airy mango: a perfect end to a copious meal.

On top of that, I had never had such amazing service. Alright, I admit: I was alone in the restaurant that day. I realize that if I hadn’t been, Mr. Joseph probably wouldn’t have been able to take the time to be this extremely attentive, but still! He wasn’t obliged to, whether I was alone or not, and did it anyway.

He gave me a summarized explanation of the different regions in India in order to explain the menu: where certain dishes came from, what they were made of, what I could expect… He also gave me a history lesson through the paintings in the restaurant!

Plus, he was incredibly sweet and attentive, making sure everything was to my liking when he wasn’t busy serving my meal, which came out very quickly. 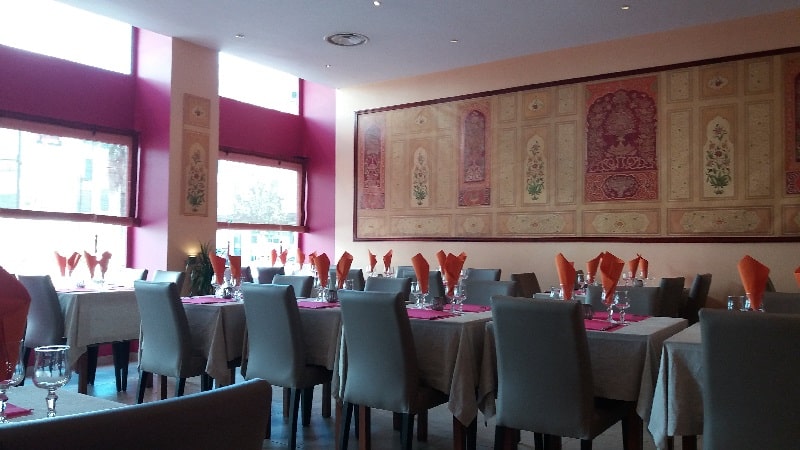 The inside of the restaurant. Yes, it was very empty and a little awkward for me… © Rebecca Wise

My rating: 5 buttery chickens and adorable waiters out of 5! I can honestly and confidently say this was the best restaurant on the list and one of the best I had ever experienced.

So, this might have been a mistake on my part. I could have saved the best for last and left it on a good note with the Rose Indien. However, I wanted to try out one last restaurant that was more of a takeaway style, a perhaps quicker and less costly option. I wanted to offer diversity. My bad.

Flavors and Spices is a newer takeaway location that seems like a very cool place to be, thanks to its modern decor. It also has an impressive 4,8/5 on Google with around 30 reviews, so I had to test it out, right? 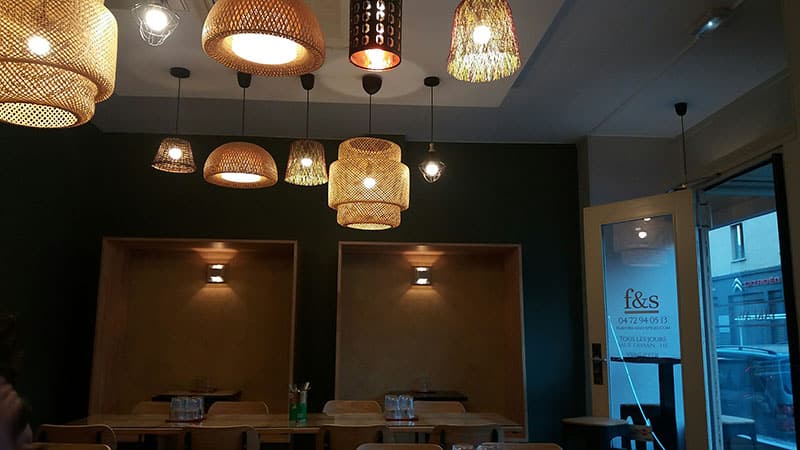 Well, I found another flaw in the system and this time, it is not so good.

The service was okay, quick, the waiter didn’t really take the time to explain anything and wasn’t exactly personable. Not the chatty type, I guess. He also had an earbud in: he was probably busy. I guess I shouldn’t have expected much as this is not, after all, necessarily meant to be a sit-down restaurant.

My order consisted of:
Pakoora (eggplant and potato fritters, made with chickpea flour), 4,50€
Biryani Shrimp, 13€ to which I added a drink and cheese naan for 2,50€

Total: 19€ (Remember when I said this was supposed to be the fast and cheap option? Yeah, again: my bad.)

The Pakoora was actually quite nice, tastier than the rest. © Rebecca Wise

You’ve probably realized that the price point isn’t exactly what I thought it would be, it’s basically the same as restaurants (barely under). Unfortunately, though, it was not restaurant-quality food.

The general consensus among us was that the flavours were extremely underwhelming, and there wasn’t any spice to make up for it. We didn’t even finish the naan, which also disappointed our taste buds.

I can’t say that the food was bad but I also can’t say that I would bother coming back, the expense isn’t worth it. I’d rather sit down, wait barely any longer, and pay a couple more euros if I’m going to go out of my way to eat Indian cuisine. 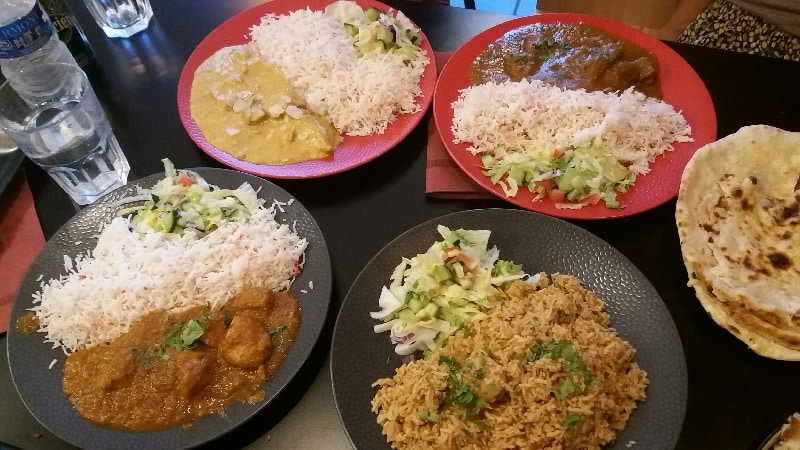 Looks can be deceiving… © Rebecca Wise

Our rating on average: 3/5 (my friends were generous, I was leaning more towards 2,5/5)

They can’t all be winners I guess!

I can officialy confirm that in most cases, reviews online can be trusted. This top five was very succesful and I highly recommend you try these restaurants for yourself. Then, come back and tell us what you thought. Make sure to tell us about your own personal favourites as well!