Home » We are Lyon » How to bring American visitors to Lyon

How to bring American visitors to Lyon

For several years I’ve been doing my very best to tempt Americans away from Paris by urging them to give a try to Lyon instead: gorgeous, stylish, cultured, and with a lot less tourists!

Getting Americans accustomed to Lyon

Every time I find myself living in a foreign country and end up telling someone I am French, invariably I face the inevitable question: “Are you from Paris?”.
For the past 5 years, urging visitors to give Lyon a try has become a part of my business.

This is my first article on This is Lyon and I hope there will be many more as I have so many good stories to share with you being both French & American and having lived in France, Italy, England, and America!
I am back in France near Lyon at the moment where I lead French immersion programs and where I just launched my brand new French language & culture online school!
The first course called “600 Words” teaches via video, audio, and written files, how to converse in French with the most commonly used 600 French words. Fun & efficient! I love having an online business because it gives me the geographical freedom to live wherever I want to and get my Lyon fix whenever I feel like it! 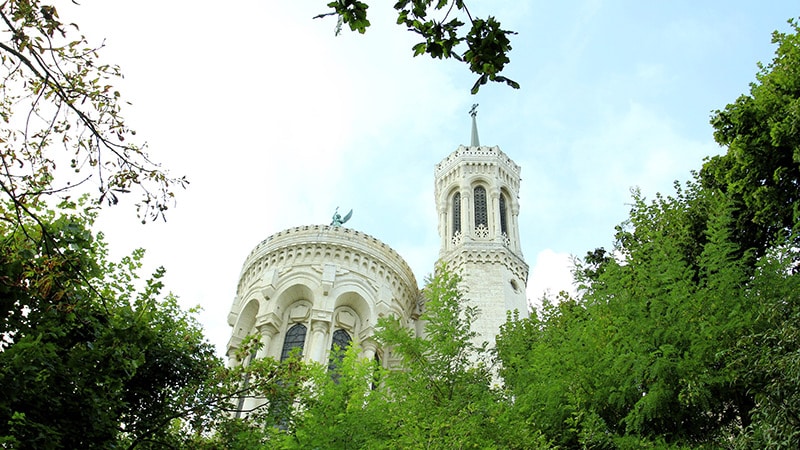 My students come from all over the world but mostly America as it is where I began my business back in 2013.
During the immersion programs, I always make sure to take them to our beloved Lyon so they can experience its beautiful vibe, architecture, history, and… les bouchons lyonnais bien sûr! Every time they are mesmerized by le Vieux Lyon, its charming narrow streets, the cute little boutiques and art galleries, the impressive Cathédrale Saint Jean & Basilique Notre-Dame de Fourvière, not to mention the gorgeous smells coming from all the restaurants!
I often take them to Les Fines Gueules (by the Smoking Dog), don’t you love that place?

Being French in Seattle

I started teaching French when I moved to Seattle in 2010 where I was very pleasantly surprised to find a ton of seriously hard core Francophiles! Who would have thought the North West (this is what we call mostly the 2 states of Washington and Oregon) had such a love for France?
I taught at Community College, l’Alliance Française, and Rosetta Stone. Great experiences, which also helped me to understand adult students felt tired with standard learning formats and were ready for something a little more personal and a lot more dynamic!
Three years later, my company French Truly was born.

We had a blast making sure the culture & the history was always the base of the language learning activities. I began by organizing conversation groups at the local French restaurant and bakery, visiting countless retirement homes, and helping people organize their vacation in France.
Then, as the company grew and became quite famous in Seattle, I found myself cooking French food at the local TV channel (King 5), discussing French greetings at the local radio station (KIRO), speaking at the University of Washington about French culture, hosting a monthly event around French cinema at the biggest theater in town (SIFF), and last but not least taking groups of Americans to Lyon!
Definitely not your usual (and sometimes boring) French class! 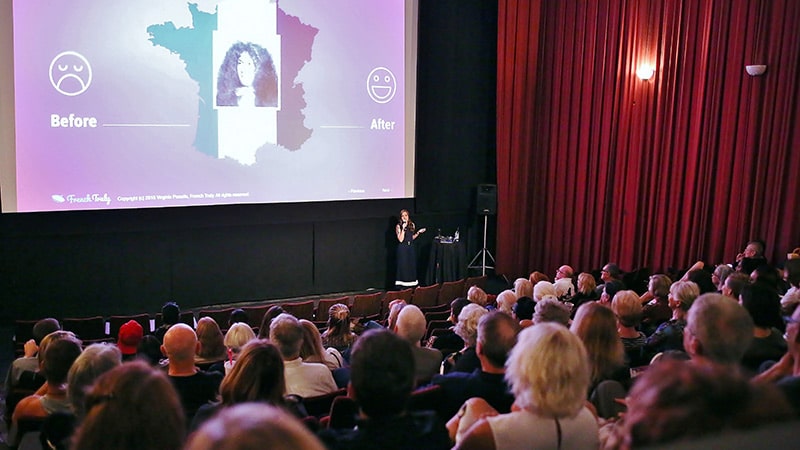 French Truly Salon at SIFF: So many Francophiles in Seattle coming to learn all about French culture at the monthly salons © Virginie Paradis

Now that I’ve moved to France, I’ve shifted the trips to France from purely cultural to full French immersion programs. Why? You might find this funny… because over the years I’ve heard so many of my American students complain about their French vacation… Did they not like it? Did they not have a good time? Were the French unpleasant? Were they rude?? None of the above. 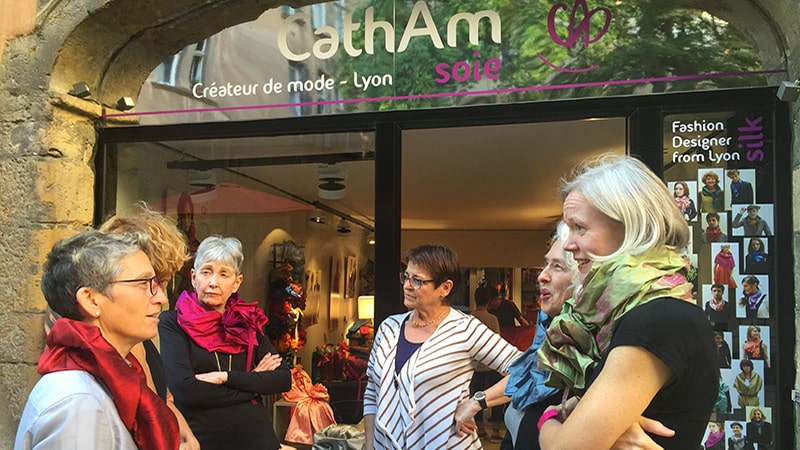 My students complained that French people were so excited to practice their English, that in the end, they ended up speaking close to no French at all. Shame when you’ve just spent months practicing your French speaking skills! They could have insisted but often insecurity took over and settled for good old English!
I think that’s quite ironic considering how many times I was told the French were rude because they refused to talk to anybody who didn’t communicate in French!

It sure seems like things have changed! Would you agree?

3 thoughts on “How to bring American visitors to Lyon”