Home » We are Lyon » Box Trees 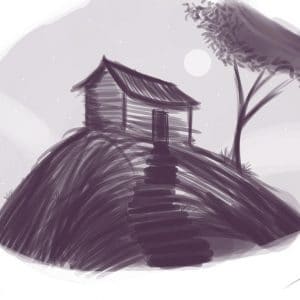 Children always find somewhere to hide. They’re hunters of the hidden. Dark places, cosy, away from the world you know, full of whispers. Who hasn’t sought refuge in a dilapidated shed at the bottom of the grandparents’ garden, in a few slats of wood nailed to an oak tree, a hill outside a city, a shredded piece of tarpaulin thrown over two chairs, a cupboard with coats in?

A girl steps into a big house and won’t nod in agreement with her mother who thinks the kitchen unit is absolutely stunning, is it IKEA? She won’t look at surface, at cut-glass vases, at paintings of obese aristocrats holding guns – she’ll look inside things. Cupboards, boxes, locked-up doorways, cellars. Or he will, if he’s a boy.

They might find treasure there to add to their collection of screwed up shopping lists, buttons, animal bones, thimbles and mangled bits of metal. Or they might find silence, who knows, even an imaginary friend.

When I lived in France as an 8-year-old, my hideout was a box tree. A knotted labyrinth of branches, covered in tiny, thick, spade-like leaves, green even in winter. In the box tree I was captain of my box tree ship, insects were my shipmates, birds my compass, big sister, my bitter one-eyed enemy. She was on the other side of the ocean, memorising the names of capital cities instead of playing with me, so I’d order the insects to throw stones at her when she walked past with her index cards and nose in the sky.

When I came back to the real world of homework and yes-pleases, it was easier somehow, because I had my space, my ship, my somewhere to disappear. I didn’t get around to painting the main branch bright red, but I wanted to, and carve out my name.

Back in England, I left the box tree behind. Hideouts came in different forms over there. Communal hideouts for illegal activity mainly. Under the ramp in the skate-park or in early evening bus shelters, we’d neck back cheap cider, bought by a commendable 18-year-old businessman called Dave at 10 per cent interest. We’d pick up cigarette butts from the floor and light them, philosophising about people we’d kissed with tongues.

At University hideouts were libraries, boys’ beds or our own heads, as all of us tried to piece together who we thought we were, to go out into the Big Wide World and be it. It was a calm place, slow, sexy, full of Proust, bad sex and oodles of potential. It made us feel part of something bigger.

Because in the Big Wide World you get to discover that there’s not a lot of room for hideouts. Adults have dismantled many, or perhaps they just eroded, as you step into a bullet-point life of screens, suppers and zombie-like head-nodding. Not much room for thinking, for disappearing, for contemplating what the hell we’re all doing here. Not much space to listen to that inner voice.

The closest thing to a hideout for adults might be a car on the way to work, a soothing music bubble you bathe in whilst shouting insults at a cyclist who thinks he fucking owns the road. It might be a strip club, a gym. You can find snippets of yourself in many places, and slowly you get to stitch them together. But I reckon to find some sense of meaning, or peace, or whatever, a real hideout is a solitary one, not choked in traffic fumes or Chantilly lace.

So maybe before we become fully digitalised, anaemic, stressed-out quasi-humans on the verge of extinction, we could start to listen to that squeaky kid voice inside saying c’monnnnnn!  and tugging at your finger. Let it take you to a park, give you a leg-up that tree so you can stare at a cloud, help you colonise a wooden bench, sit on a roof or a mountaintop. If not for an hour, then for just a minute.

Because in this odd, mad, beautiful world, everyone needs a box tree.