Built starting in the 12th century on the banks of the Rhône, the Hôtel Dieu of Lyon was for centuries one of the most important and most famous hospitals in France.

This imposing 375-meter-long building ceased its hospital activity in 2010 and has now been transformed into a commercial center and luxury hotel. A figure of Lyon’s heritage, it also hosts a City of Gastronomy. 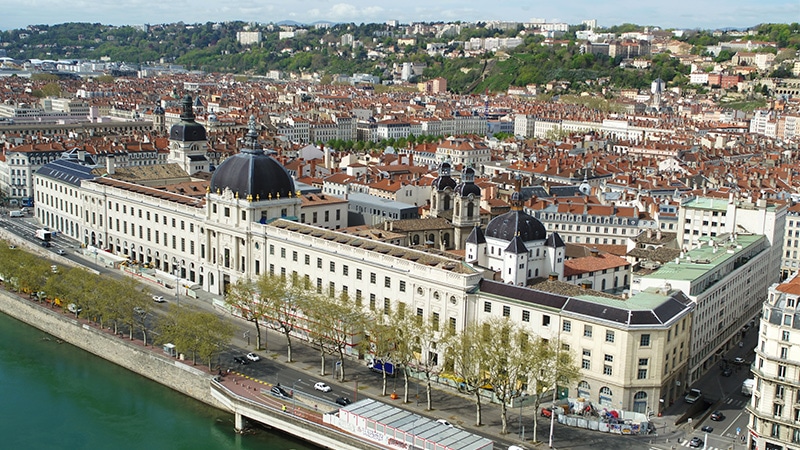 Hôtel Dieu is one of Lyon’s most historic buildings, serving as one of the main hospitals in France for 800 years. ©Vincent-Ramet

What is Lyon’s Hôtel Dieu?

For 800 years, Hôtel Dieu was the main hospital of Lyon. Renovated many times over the centuries, it is one of the most commanding historic buildings on the peninsula, with its long 375-meter façade along the Rhône, topped with a dome built in 1764.

The current building is the work of architect Jacques Germain Soufflot (18th century), to whom we also owe the Pantheon in Paris. Its façade was intended to impress visitors coming to Lyon and show the economic power of the city.

The chapel and its courtyard date from the 17th century. From the building’s Middle Age history, only the remains of a wall survive.

Generations of Lyonnais were born in this hospital, which had a maternity ward until the closure in 2010. It was also the site of many medical advances, such as the first x-rays, and was home to many innovative doctors of the 19th and 20th centuries. This hospital made Lyon a stronghold of medicine in Europe, and many European monarchs were treated there.

Hôtel Dieu also long housed the museum of Lyon’s Hospices Civils, or state hospitals, who formerly owned the building. Hôtel Dieu was classified as a historic monument in 1934.

Due to a lack of resources and the dilapidated condition of the building, the Hospices Civils sold Hôtel Dieu to Crédit Agricole Sud-Est. Crédit Agricole entrusted the renovation to the Eiffage Group, alongside architect Albert Constantin and Didier Reppelin, who serves as the head architect for Lyon’s historical monuments. New buildings were built all along Rue Bellecordière

Starting in April 2018, the 42,000 square meters of Hôtel Dieu house stores, restaurants, and offices. An Intercontinental hotel is scheduled to open in early 2019 with an entrance under the building’s large dome. The building will also host a City of Gastronomy and housing units.

Where is the Hôtel Dieu of Lyon?

The Hôtel Dieu of Lyon was first built on the banks of the Rhône in the 12th century, at the same time as the first bridge across the Rhône. It allowed the city to welcome pilgrims and travelers arriving from the east. 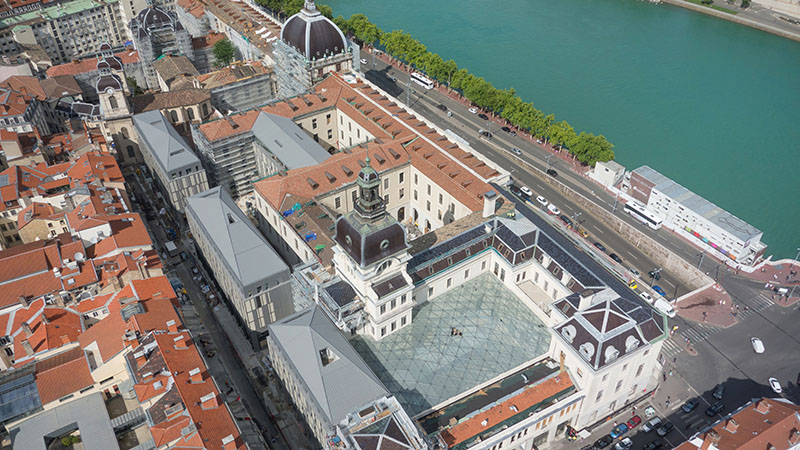 Hôtel Dieu commands the Presqu’île from its spot on the banks of the Rhône, visible from the other side of the river in the quarter of Guillotière. ©Vincent-Ramet

Today, Hôtel Dieu occupies the right bank of the Rhône on the Presqu’île, between the Pont de la Guillotière and Pont Wilson bridges. It is bordered on the south by Rue de la Barre and on the north by Childebert Street. To the west is Rue Bellecordière, while on the Rhône side is the Jules-Courmont wharf.

Hôtel Dieu is located a hundred meters from Place Bellecour and Place de la République, opposite the district of Guillotière. It can be easily reached by metro lines A and D from the Bellecour station.

542: The first hospital in Lyon is created by King Childebert and Queen Ultrogothe, intended for pilgrims and beggars. It was probably located in the Saint-Paul district on the banks of the Saone.

1184: A religious congregation builds an establishment on the banks of the Rhône to accommodate these populations. The “frères Pontifs” also build the Rhône bridge that links Guillotière to the Presqu’île.

1484: The congregation entrusts the hospital to the aldermen of Lyon, the elected officials who manage the city. They expand the establishment, which can accommodate 200 people.

1532: François Rabelais is appointed doctor at Hôtel Dieu until 1535. It was in Lyon that he wrote his two books Pantagruel and Gargantua, two French literature classics. 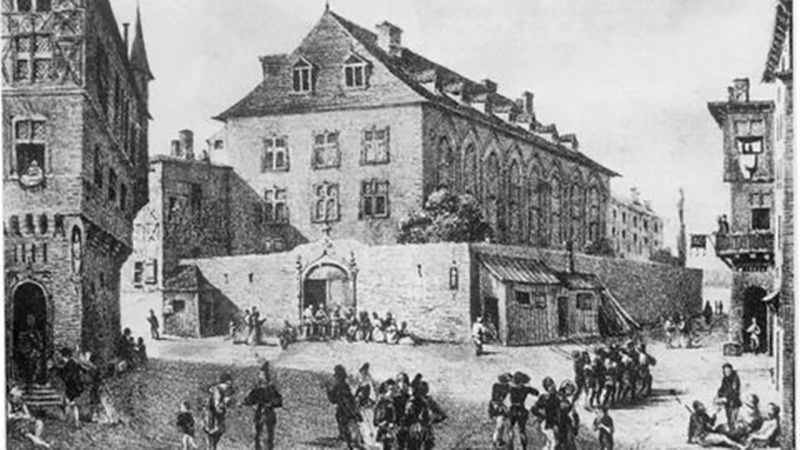 The City of Gastronomy will be held in the section of Hôtel Dieu that dates back to the 16th century, when the building looked like this.

1622: Deemed too small, the premises are demolished and rebuilt with four rooms in the shape of a cross, surrounding a chapel. The cloister and chapel are still standing and date back to this period.

1741: The municipality plans to build a new wharf from Saint-Clair to Bellecour and asks Soufflot for a large building along the Rhône. The work begins in 1741 and the first phase ends in 1761. The Grand Dome is completed in 1764. It will be damaged during the French Revolution and rebuilt several times. The current façade along the bank was completed in the 19th century.

1944: The dome is destroyed by a fire in the fighting during the Liberation of Lyon. It will be rebuilt in the 60s. 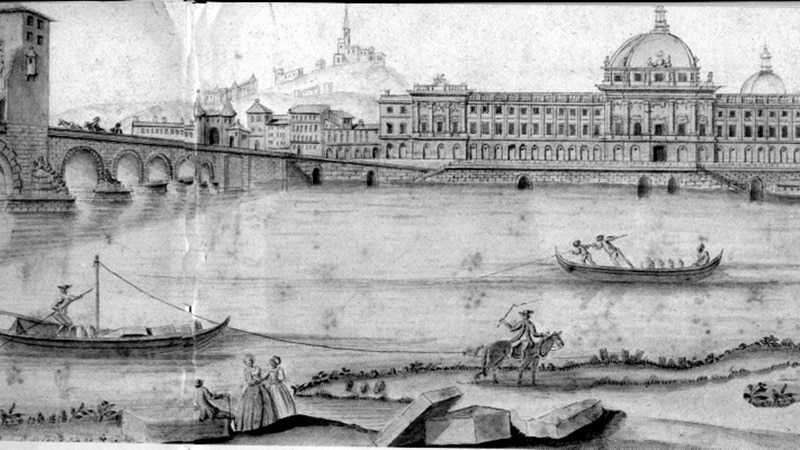 The 18th century Hôtel Dieu looks a little bit more like the building that can be seen today.

2007-2010: Hôtel Dieu’s hospital services are gradually transferred to other hospitals and the building is closed in 2010. The Hospices Civils give the building up to Crédit Agricole Sud-Est.

What is there to see in Hôtel Dieu?

Formerly not very accessible to the public, Hôtel Dieu used to be primarily a barrier between the Rue de la République and the Rhône. The two hectares of Hôtel Dieu are now open to the public thanks to seven entrances, successfully linking the riverside to the heart of the city.

The southern part of Hôtel Dieu, at the corner of Rue Bellecordière and Rue de la Barre, has been transformed into a shopping center with some 40 food, clothing, and home goods stores. This is the most recent part of Hôtel Dieu, dating back to the 19th century. Hôtel Dieu hosted stores throughout its history to help finance the hospital.

Meanwhile, the southern courtyard has been topped with a large glass roof. This parts hosts offices as well as restaurants with terraces (Beef House, Wagamama, Buddha Bar…). 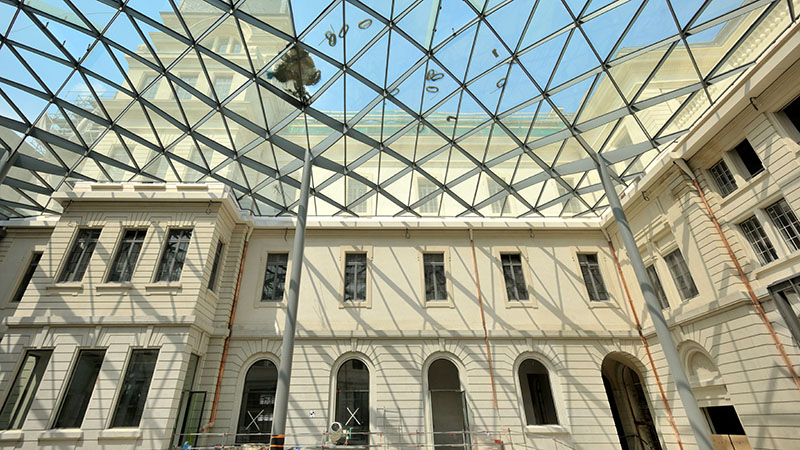 The glass rooftop of the southern courtyard filters light on what used to be a parking lot and is now filled with shops. © Vincent Ramet

The old cloister of Hôtel Dieu, accessible from the Place de l’Hôpital, was not so long ago a parking lot. Now, it hosts a garden of medicinal plants where visitors can stroll or have lunch on the terrace. The garden is a nod to the 16th century, when doctors were primarily botanists and grew their plants in the hospital gardens. This is one of the oldest parts of Hôtel Dieu (early 17th century).

The Grand Dome stretches 32 meters high, designed by Soufflot to ventilate the hospital and expel microbes. This will be the lobby of the Intercontinental Hotel, and guests will even be able to climb to its balcony. The 5-star hotel with its 143 rooms will occupy the large eastern façade of the building, with a magnificent view of the Rhône.

The City of Gastronomy will be installed in the cross-shaped building around the small dome, located at the north end of the building. Some parts of this section date back to the 16th and 17th centuries. 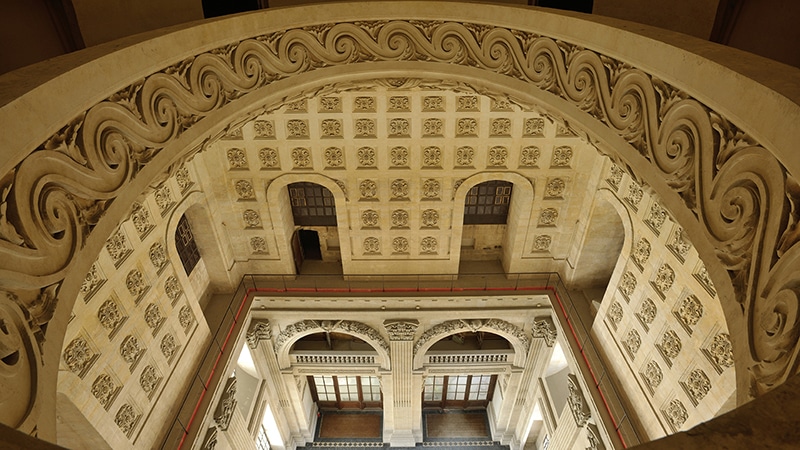 The grand dome will serve as the lobby for the Intercontinental hotel, coming in 2019. © Vincent Ramet

Now refurbished and reopened to the public, the Grand Hôtel Dieu has become one of Lyon’s must-see buildings. This mammoth bears witness to the city’s long culture of medicine and architecture, having survived 800 years of Lyon’s history and advancement.

Other historical landmarks in Lyon 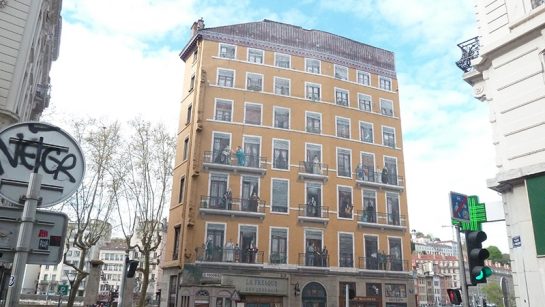 The most prominent Lyonnais, all on one wall.