Lancer de Hache in Lyon 3 is one of only a few axe-throwing centers in France, introducing the Lyonnais to a sport that got its start from an age-old Canadian tradition.

Sporty Lyonnais will soon have a new hobby: axe throwing.

Lyon’s one and only axe-throwing center is now open at 4 rue de l’Epée in Lyon 3, bringing with it wooden targets, caution tape, and a whole bunch of axes.

Keeping Up With A Trend

Opened by Florent and Mélody Rivoire in February, Lancer de Hache proposes hour-long sessions for up to 18 people, giving them a chance to don a classic red-and-black plaid shirt and take aim in a style that’s anything but classic lumberjack.

“We’re two Lyonnais, born-and-raised,” said Mélody. “Axe-throwing is already popular in Canada and the U.S. and we’ve been looking for a new hobby to propose to the people of Lyon for quite a while now.” 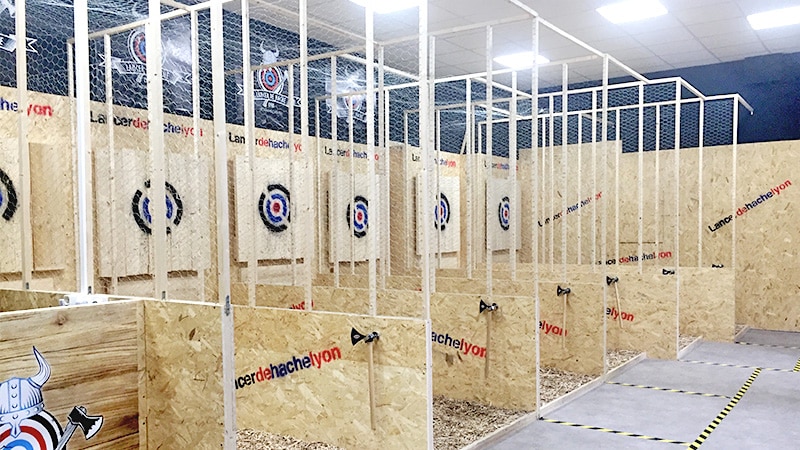 Lancer de Hache has six targets that can be reserved for axe-chucking activities.

The couple already runs a Lyon Escape Game and decided that axe throwing was a good way to start their next endeavor. A sport started in Canada as a way to reconnect with nature and national tradition, the activity has grown in popularity around the world, including in France.

“It’s really developing,” Mélody said. “There are centers in Paris, Lille, Bordeaux, and now here in Lyon. We’re in the middle of a trend towards the Viking age and what vikings represented.”

Believe it or not, there’s quite a technique behind axe throwing.

Each of the six targets can be used by up to three people (one axe per target, of course!), allowing the center to accommodate up to 18 people per hour session.

After putting on the optional but thoroughly amusing plaid shirts, visitors are given a short technique explanation, and set loose on the targets. 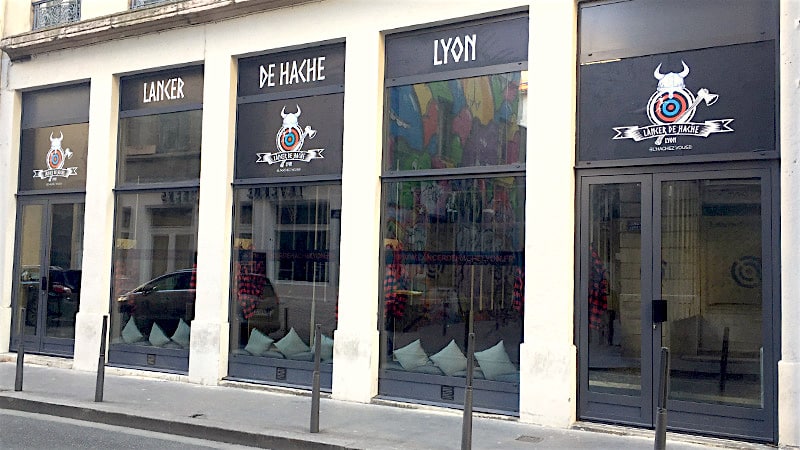 Holding the axe towards the bottom of the handle, throwers bring it above and behind their shoulder, bending the elbow at a right angle. They then throw it, though it works best when it’s more of an energetic toss. Flicking the wrist as the axe is released allows it to rotate and stick into the soft wood target at the end of the lane.

The scoring point values (yes, it’s scored) run from one to four depending on where the axe lands. It doesn’t have to hit the target to earn points, but it only counts if it sticks somewhere on the wood.

A New Hobby from an Past Era

Daytime sessions are best for company groups and team building, while the general public can come have a go in the evenings.

Whether looking to let off steam, celebrate an occasion, or just try out a new hobby, any participant over the age of 16 is welcome to come test the concept. Under-18s do need to be accompanied by a parent or legal guardian. 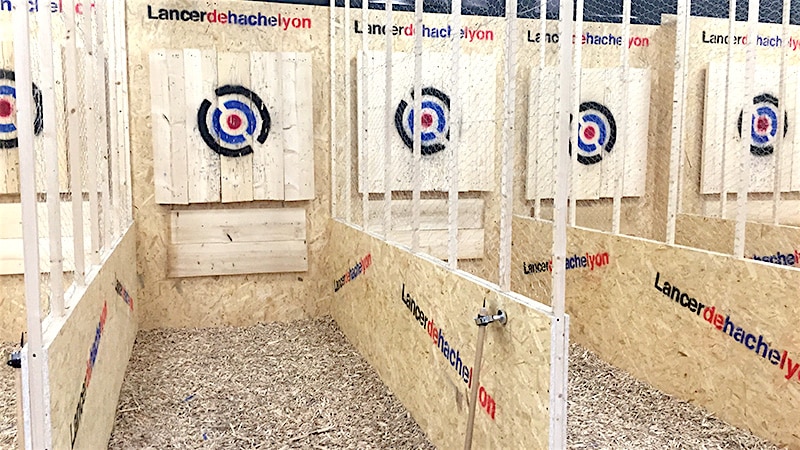 The axe only scores points if it sticks somewhere on the wood block, even if it’s not in the target. No points if it falls, either.

“These days, people are looking for innovation, novelty, new ideas,” said Mélody. “They don’t want to go bowling or go to the movies like they’ve been doing for years.”

So trade in the bowling shoes for a plaid shirt and break out your inner lumberjack. It’s time to go axe throwing!

€50 per target for one hour

Up to three people per target