Home » We are Lyon » Why the Virgin Mary was a Genius

Why the Virgin Mary was a Genius

An Average Individual contemplates Fourvière and the Virgin Mary with her friend George. 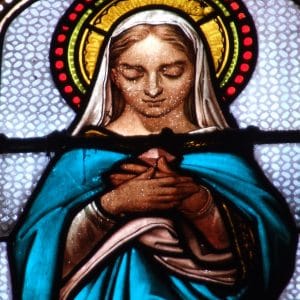 My friend George loves the Virgin Mary. He thinks she looks very pleasant, caring, sexy, in a mother-sexy kind of way. He also thinks her name is genius. The Virgin Mary. It’s a reminder to strive to be something you’re probably not. Like a tax-dodger being called Honest Pete.

I tell him you can’t say stuff like that, particularly in France, particularly in Lyon. Hell, she saved the city from the Black Death in 16-0-something. She even has a whole day dedicated to her where people light candles and pop them on their windowsills. 8th December. That’s blasphemy man.

I wonder whether George has showered this week. His breath smells sour and dandruff snowflakes sit on his shoulders. Dirty bastard.

We look up at Fourvière basilica, the symbol of Lyon, way up on Fourvière hill where Christians and Roman remains rub shoulders. The basilica was built in her honour. It’s a huge white thing with four leg-like turrets sticking up to the sky. Local pagans call it an upside-down elephant. And Mary is in front of it, in robes of gold.

George thinks Mary must have read the same book on evolutionary psychology as he did. He read it last month when he should have been working. It’s about how evolutionary biology and cognitive psychology combine to piece together the jigsaw of the human mind through history. Mary’s a true survivor, he says, a modern-day, shit-hot pragmatist.

Nazareth. Wells, farms and bare feet. Lady meets man. Lady chooses man because he’s reliable husband and father material with productive hands. Bit boring no doubt, but wild men with beer debts are not an option if your quest is survival. Lady probably wants a baby at some point or maybe just a bit of fun, come on, but Man is too busy building that wooden spiral staircase, so Lady goes down the local tavern. Meets this guy called Vince and they speak about the meaning of life, local taxation and whatnot.

A leads to C, by-passes B, and through lack of sufficient family-planning methods, Lady gets a sore head and a bump on her belly. A few months later she’s there banging on about the Holy Spirit. Had it not been for the angel that came to Man in a dream – thank God – he’d have probably divorced.

After that, everywhere she goes, she introduces herself as Virgin Mary. And the name sticks like Scotch.

“Genius,” he repeats. “A stroke of evolutionary genius.”

She believes it. We believe it. Everyone’s happy.

‘What would you call yourself?’ I ask, imagining all sorts. Something to remind him to wash more, to park properly, to not be such an idiot in bars and restaurants, to be more responsible with money, to evolve into something better.