The Jazz à Vienne festival has brought together some of the best jazz artists since its founding in 1981. The lineup for the 2019 edition of the festival is now out. 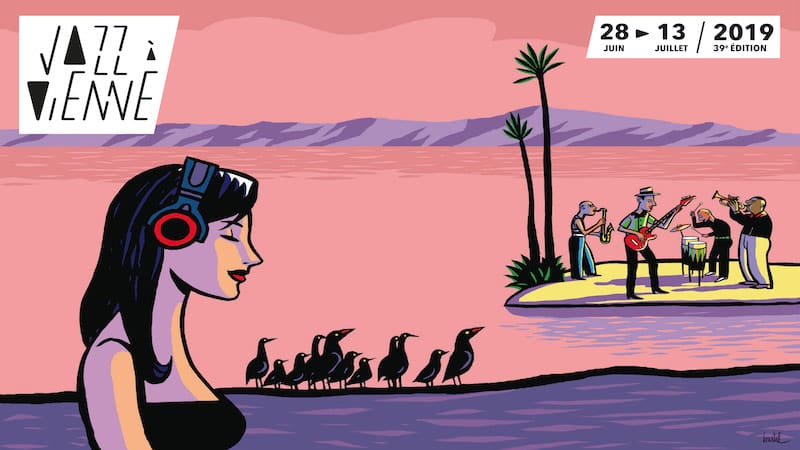 39th Edition of the Festival

The festival was originally set up to celebrate jazz and introduce it to novices of the genre. But just weeks away from the 39th Jazz à Vienne, the festival is one of France’s – and the jazz world’s – biggest festivals.

In the past, the festival has hosted the likes of Ella Fitzgerald and Miles Davis, and this year’s festival will be as good as ever…

The night called Up above my head will see performances by singers Camille and Sandra Nkaké. Pianist Raphaël Lemonnier, and saxophonist Raphaël Imbert will also perform. The artists will perform a mix of jazz, Afro-American music, protest songs and gospel songs.

The line-up also includes many anglophone jazz stars. The Canadian pianist and singer Chilly Gonzales will perform a ‘pianovision concert’ on 29th June.

In pianovision concerts, the camera focuses on the keyboard of the piano and the singer’s hands.

Meanwhile, Mississipi-born Zac Hamon will present some songs from his album Call It What It Is (2016), and Minneapolis artist José James will celebrate Bill Withers on 2nd July.

Likewise, the famous composer, saxophonist and multi-instrumentalist, John Zorn will bring 50 of his most recent compositions to the amphitheatre on 10th July.

The Spanish influences on jazz will also be highlighted, thanks to the Flamenco evening on 3rd July, where Chick Corea and his band will perform, along with the Andalusian guitarist Juan Carmona.

The festival will finish with a whole night of jazz, from 13th until 14th July. Highlights include the French pianist David Tixier, who will play with Croatian drummer Lada Obradovic, as well as the Swedish singer Neneh Cherry, and Montreal-based Nicolas Dupuis.

The link between hip-hop and jazz will also be made evident on 5th July, with Tom Misch’s soul-jazz-hip-hop music mix. The French-Cuban duo Ibeyi follow the next day with their hip-hop, pop and electronic sounds.