Famous Restaurants in Lyon – Brasserie Georges: The oldest brasserie in Lyon and one of the largest in Europe.

With its international reputation the historic Brasserie Georges serves typical Lyonnais dishes in a grand and stylish atmosphere, entirely redesigned in the style of Art Deco by Bruno Guillermin in 1924. Over 500 guests can be served at each service and a list of famous people to eat here includes: Jules verne, Edith Piaf, Ernest Hemingway and Jaques Brel. 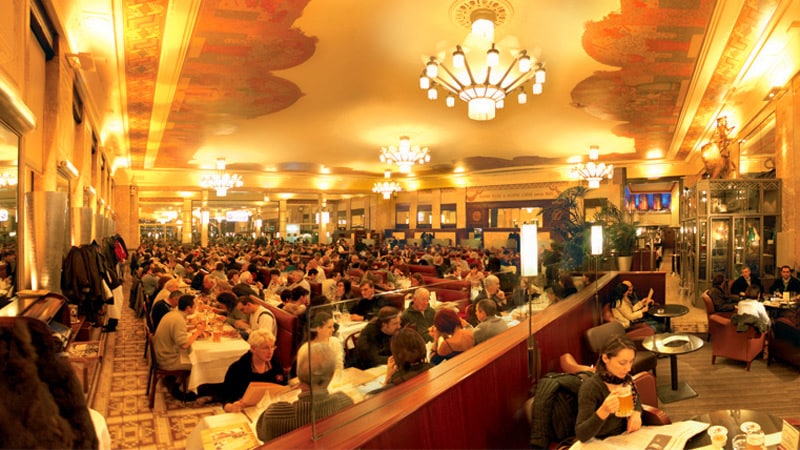 History of the Restaurant:

The restaurant was was built in 1836 by Georges Hoffherr, a young brewer from Alsace who discovered that the excellent water quality of Lyon at that time was perfect for making beer. The location near the confluence of the Rhone and the Saone was ideal in that it was a crossroads for stage coaches travelling between Paris, Lyon, St Etienne and Marseille.

The architecture of the Brasserie is impressive, particularly its 700 square metre ceiling which is supported only by three huge wooden beams measuring over 8 metres in length which were brought from the Chartreuse by oxen. In the 1930’s the Rinck family of brewers took over the Brasserie and in 2002 Christian Lameloise became the new owner.
Since 2004 the Brasserie continues to brew its own excellent beer as well as serving the finest food in an elegant establishment, the history of which goes hand in hand with that of Lyon.

Brasserie Georges is a fabulous place to savour the grand history of Lyon and its impeccable cuisine. It’s ideal for an intimate lunch or dinner for two or for larger groups including children.

What to eat at Brasserie Georges?

There are a variety of typical Lyonnais and regional dishes including meat, poultry and seafood along with Nordic specialities such as Norwegian omelette and sauerkraut.
In 1988 the Brasserie served the world’s largest sauerkraut weighing in at one and a half tons and also in 1996 served the worlds largest baked Alaska measuring 34 metres.

Signature dishes include their famous sauerkraut, local pork and pistachio sausage and “Rossini-style” duck.
There is also a good childrens menu for €9,50.

Every Saturday evening there is live jazz music which only adds to the wonderful atmosphere of the Brasserie Georges.

There are gift certificates available from 10€ to €50

The Brasserie is a short 5 minute walk from Perrache train station which is also served by Metro line A, Trams T1 and T2 and numerous buses.
Parking is available at the Parking Centre d’échange Perrache. 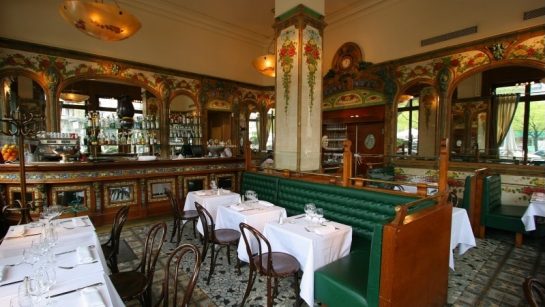 Sitting across the street from the equally majestic old train station of Brotteaux, the brasserie is one of the best examples of Art Nouveau in France.