Tom & Co is a Lyon brewery that uses local ingredients and promotes environmentally-friendly production. Started by Tom and Coline Sharrock, a Scottish and Lyonnais couple, the shop located near Hotel de Ville sells up to eight varieties of organic beer and educate people about how it’s made and the earth it comes from.

“Seasons” by the Future Islands hums from the speaker above the deep-stained wood bar.

Edison bulbs hang from the ceiling, casting a soft orange glow on the chalkboard walls, scrawled with the recipes and diagrams. 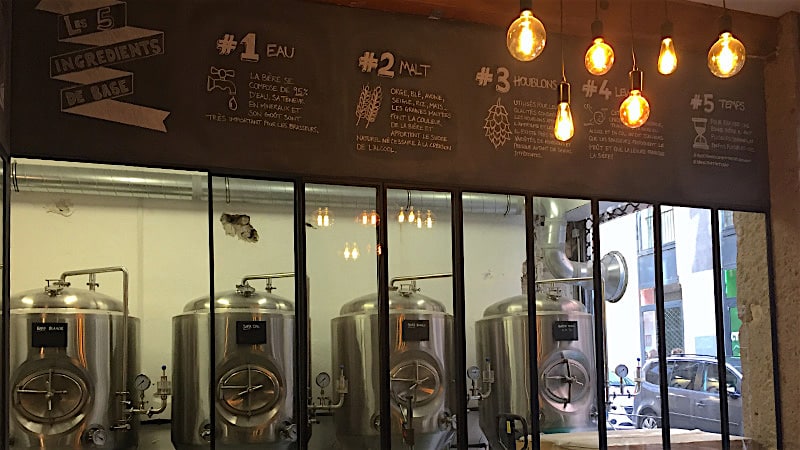 The Tom & Co Brewery in Lyon seeks to educate customers about where beer comes from and how it is made while remaining environmentally-friendly.

A man walks by on the street, then walks by again, trying to make sense of the four giant fermenters placed just out of reach behind the floor-to-ceiling windows.

This is Tom & Co, the newest brewery of Lyon. Together, husband and wife team Tom and Coline Sharrock are daring to go where few have gone before: organic, environmentally-friendly, quality beer, brewed right here at their small shop in the heart of the city.

“The plan of the game is to do everything with respect for the environment, and all organic and recyclable kegs,” said Tom, 32.

At the center of this mission are local ingredients and their stock of glass and plastic growlers, or reusable jugs that can hold up to two liters of beer.

At work on their store at 5 rue des Capucins in Lyon 1 since November of 2017, the Scottish and Lyonnais couple is ready to take their business public, opening their doors for the first time on Saturday, March 10. 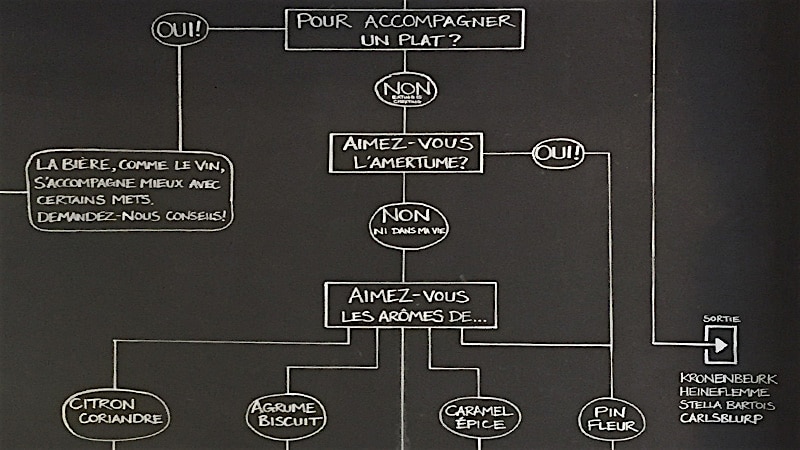 The shop includes a flowchart on the wall to help customers decide which beer they might like.

They plan to offer beer for sale, but also beer education in the form of events, food and cheese pairings, and shop tours. They are joining a small crowd of Lyon brewers, made up of Brasserie Georges, the Platypus, and now Tom & Co.

“We want to explain how to make beer, what is beer,” said Coline, 30, otherwise known as Co. “In France, not a lot of people know that.

Tom & Co currently has four beers in production, with plans to produce a total of eight. The opening will include their Bako Blanche and Sapa IPA, with the Gobi Blonde and Awapiko Triple soon to follow.

“Once we have the four full beers, we’re going at full tilt,” said Tom.

Tom & Co: Born in New Zealand, Made in Lyon

Tom & Co is the definition of going all in.

“We quit both our jobs last year and really thought, okay, now we’re doing it,” said Co. “There’s a moment when you think no, you need really to focus on it. Otherwise it’s not going to work.”

For this adventurous couple, that moment is now, three years after a New Zealand vacation sparked their new-found passion.

Tom, originally from Edinburgh, and Co, born and raised in Lyon, first met in Shanghai five years ago. Tom had studied Chinese in school and was teaching English, while Co was on internship with a French company’s communication department.

They discovered good craft beer two years later, on a five-month jaunt through Asia and New Zealand on their way back to Europe. 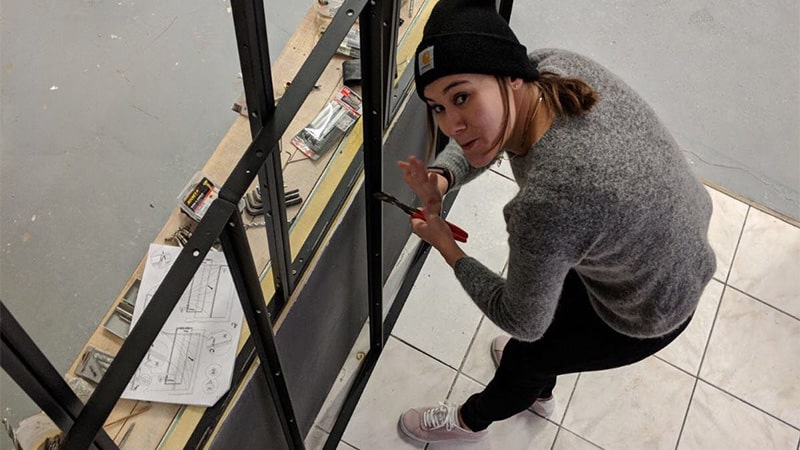 Lyon-native Coline, or Co, and her husband Tom found the space for their brewery at an old launderette in the heart of Lyon and built everything themselves. ©Tom & Co

“It’s the first time that I really discovered good beer,” Co said. Coming from a country obsessed with traditional wine, she liked the possibilities beer offered.

Tom, meanwhile, comes from a family with a beer-brewing tradition.

“My uncle brews beer in Scotland. He has a little brewery, but it’s smaller than this actually,” he said. “So I was kind of inspired by him to do that.”

On the lookout for a new project, and not wanting to move back to Edinburgh to face an already-saturated market, they settled on Co’s hometown of Lyon.

The first step on the road to Tom & Co was, of course, the beer.

“We started at home in the kitchen three years ago, practicing, trying on friends and family,” said Co. “My family was a bit surprised, and scared.”

Beer-making requires a lot of practice and an understanding of flavor combinations, temperature, and time.

“So we have our grains,” Tom explained. “We grind our grains downstairs.”

The grains go into water between 63 and 68 degrees for two hours, to remove the sugar, which then gets rinsed out. 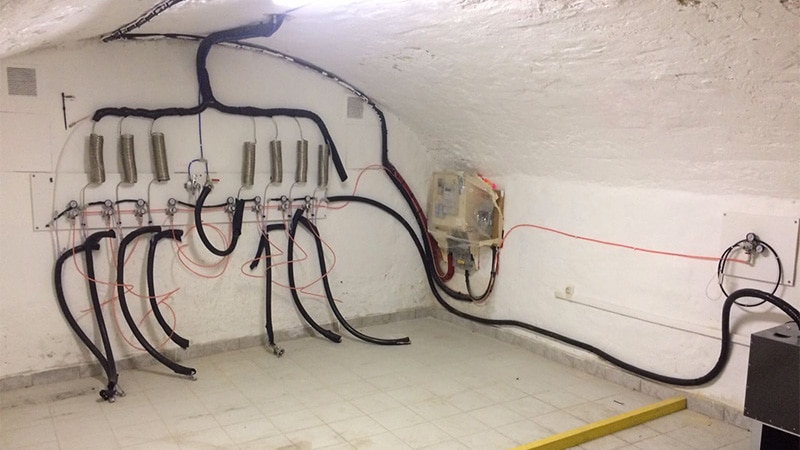 This cold-storage room in the basement will hold the kegs for the taps upstairs. Tom & Co currently has four beers in production and plans to produce a total of eight. ©Tom and Co

“We end up with this, well, in English we call it the wort but in French it’s the moût,” he said.

That liquid then gets boiled, and hops are added in for bitterness, flavor, and aroma. It’s cooled down to add the yeast and left in the fermenters, to the awe of many passersby in the street.

More hops are added for more aroma, and then it’s bottled. The whole process takes about four weeks, from start to finish. If you’re lucky, and you’ve tuned the temperature and flavors just right, you end up with drinkable beer.

“It’s incredibly difficult,” said Tom. There’s just so many things that can go wrong, so when you even come out with a beer, it’s a huge success. Now that we’re producing good beer, it’s kind of amazing.

A Place to Set Up Shop

Tucked into a one-way street between Hôtel de Ville and Croix-Paquet, Tom & Co has all the fixings of a Pinterest-style brewery plopped in the middle of France.

Enclosed by massive windows in lieu of solid walls, the fermenters stand tall across the room from eight taps.

“You can see everything that’s happening,” said Tom. “Nothing is hidden.”

Downstairs is a cavernous storage room filled with bottles awaiting their boxes, and a cold-room awaiting its kegs. 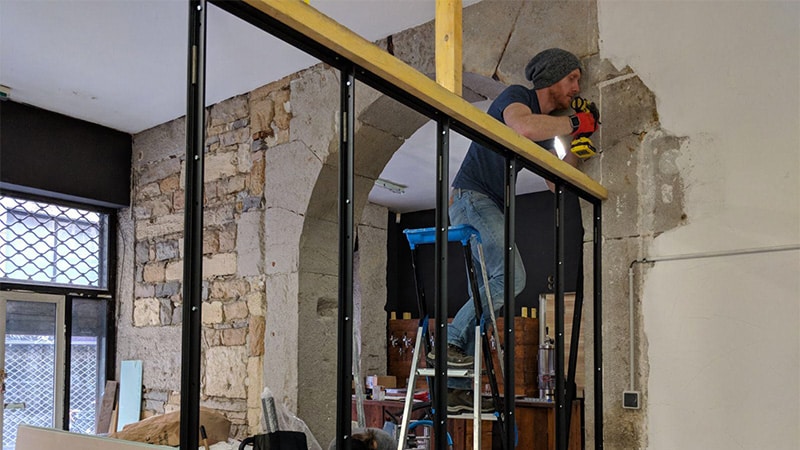 Tom (pictured above) and Coline started work on their shop in November and built it from scratch with the help of friends and family. ©Tom & Co

“This place used to be a launderette,” Tom said. “We built all the walls ourselves.”

“Because there were washing machines there were concrete slabs in the middle,” explained Co. “It was a nightmare.”

Armed with tools and Tom’s helpful father and brother, the pair set to work demolishing their new brewery. After six weeks and countless trips to the dump in their little Peugeot 107 which, Tom notes, is still thoroughly exhausted, they finally had a clean slate to build on.

The circular logo hangs proudly in the entryway, with no trace of laundry to be seen.

An Environmental Pursuit Built on Beer

Though the beer is homemade, the mission of Tom & Co reaches much farther than the Lyon city limits. Seeking to break the stereotype of masculine, intimidating beer, they wanted their labels and logo to show that their product is accessible to everyone.

“It’s a circular logo just to give the idea of community and experiences coming from all over the world,” said Tom.

The beers, Bako, Gobi, Awapiko, and Sapa, are named after places the couple has visited on their travels, the colors representative of the personality of the beers and the places they represent.

These details are just a small part of Tom and Co’s ultimate goal to show that it’s possible to make good, inexpensive beer while remaining eco-friendly. 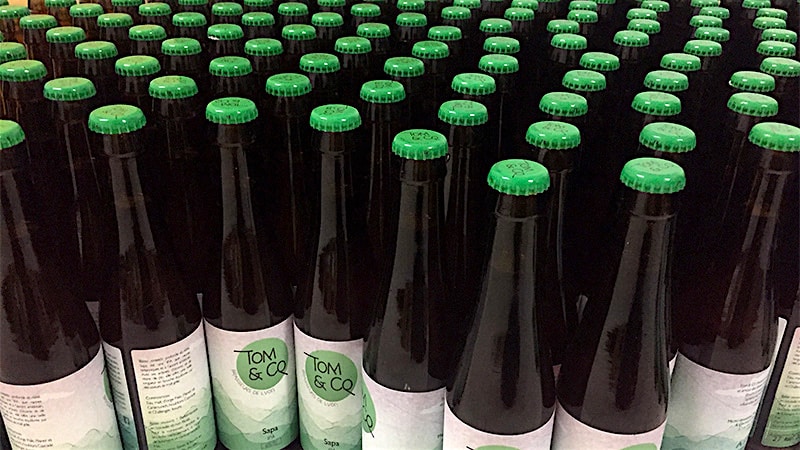 The Tom & Co beers are named after important places in the couple’s life, including Sa Pa in Vietnam, where they went hiking in the hills.

“We just think that the way humanity is destroying the environment, ecosystems, the oceans, we all need to make changes in our everyday lives that can help reverse that,” Tom said. “Otherwise we, and our business, won’t be around for very long.”

The reusable kegs and growlers along with local and organic ingredients all contribute to this message, reminding customers of the world around them, the nature that allows beer to exist, and the responsibility people have to protect it.

And if that doesn’t work, well, they still have a few kegs to go.

“Even if we are heading for Armageddon,” Tom said, “Then at least we’ll have something good to drink along the way.”

Tom & Co can also be found at the Lyon Beer Festival this April.