“Coming from Place Bellecour over to where I live and work I’m thinking, ‘People come from all over the world to take pictures of where I live.’ I’m a lucky boy.”

Johnny’s Kitchen owner Adrian Walsh, 49, is a Dublin native who came to Lyon almost 30 years ago, long before it was a cultural paradise. Johnny’s Kitchen is one of Lyon’s best Irish pubs and the seat of the French-Irish Association of Lyon (A.F.I.L.). This is Lyon sat down with Adrian and he told us a story of Irish bars, football, and “blood and guts” French food. 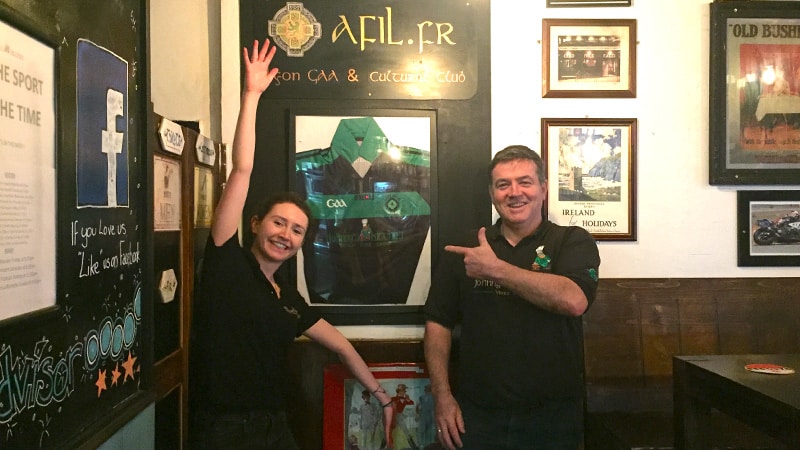 Adrian in Johnny’s Kitchen with one of his employees, showing off their A.F.I.L. pride.

Why did you choose to move to Lyon?

I wanted to travel, and I knew some French students that had been in the University of Dublin that I had become friends with.

So I came to Lyon with the idea of spending just a couple of months here. But I had not done any research or looked into it at all.

How did it go?

It’s still true now but I came here in 1991, and it was almost impossible to get an apartment and a social security number. That’s still bad.

And I just assumed that the entire world worked on a week system, as in week-to-week. Like in the United States, you get a job as barman or waiter or some sort of job in a restaurant just by looking for one.

I was thinking I’ll take a few days off and then I’ll get a job. It’s not, “I’ll look for a job.” It’s “I will get a job” the first weekend and from day one I’ll be having some sort of money coming in.

How wrong was I.

I ran out of money. I ran out of everything. I came with enough money for two weeks, because that’s all I thought I would need. And I then found myself in real trouble. I was busking on Rue St. Jean, to survive.

This all sounds really dramatic but if I’d been in real trouble I’d have just called my mother and she would have brought me home. But earning a living initially was playing Redemption Song over and over again on Rue St. Jean.

Then I got a job. I got an apartment. By the time I’d actually got all that done, I’d been here six months, and I was working in a bar and I really enjoyed it and I loved Lyon, and here I am.

How did you come to open Johnny’s Kitchen?

Johnny Walsh’s opened in 1995. Myself and a friend, the original Johnny who passed away in December, me and Johnny set up Johnny Walsh’s in 1995 and then in 2000 Johnny left and then I left in 2003.

I wanted to stop working at nighttime which is why we opened here [Johnny’s Kitchen]. The idea of this place is that it’s half-food and half-drinks, and that it’s open in the daytime.

It’s a pub but it’s much more café-esque. We have a terrace. All the pubs in Ireland would be like this if we had the weather. 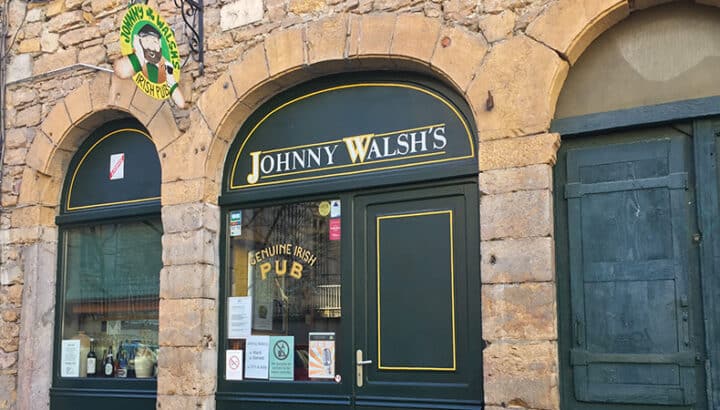 What do you do for fun?

We have an “Association Franco-Irlandais de Lyon” (A.F.I.L.). We’re quite active. There’s traditional music and dance lessons. We have Irish speaking lessons.

The Gaelic football team trains every Monday night. Boys and girls are both welcome, only adults. And we regularly play in tournaments. We’re organizing the all-France finals this June. There will be 500 footballers here, both men and women. It’s quite a serious event. It’ll be on in Parc de Parilly over a day.

For anyone who is interested in Irish culture, that’s what we do.

Where do you go for coffee, lunch, dinner, a drink? When you’re not in Johnny’s of course!

If I’m going out in Lyon, what I like to do now is just go. And then as I’m walking past a place I go, “That looks interesting.”

All these places that I remembered as being absolutely complete crap have now been taken over by young, dynamic people with ideas, and there’s all sorts of different cheese and wine bars, Belgian beer bars, there’s just no end to it.

What are your favorite local dishes?

My favorite type of food is blood and guts Lyon food. I can’t quite go the whole hog, but Tablier de Sapeur, for example, I love that. Tripe, I love that.

Where do you go for that kind of food?

Notre Maison (2 Rue de Gadagne). When you order pâté or terrine or any of those starters, he just puts the entire block in front of you and you eat as much as you want. It’s really French and really Lyonnais.

I love those experiences, when it’s totally, unapologetically: “this is it, if you don’t like it, bug off.” That’s what Notre Maison is. 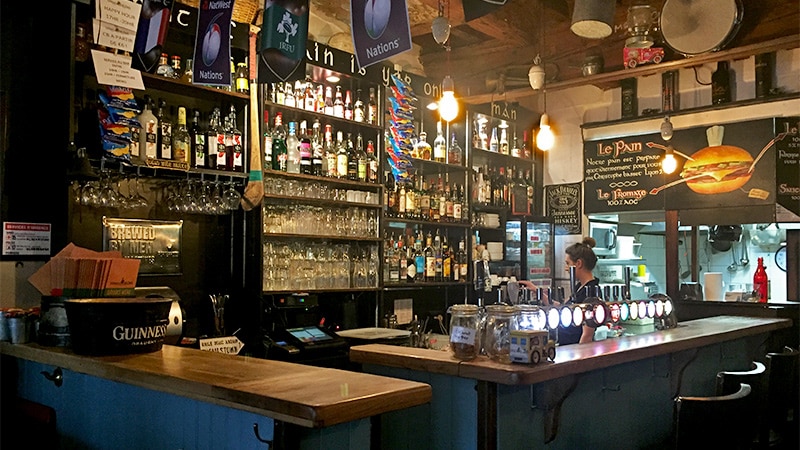 Johnny’s Kitchen is a traditional café-pub combination, but Adrian says there are also a lot of exciting new places opening up with modern ideas.

Did you have to adapt to that way of life here?

It’s not so much that I would adapt, but I love that sort of stuff. If you’re doing whatever the people are doing wherever you are, it’s nearly always good. It has to be particularly weird to be bad.

You can go anywhere in France, in a local specialty restaurant and say, “Give me whatever people eat here,” and it’s going to be something amazing, pretty much every time. If you’re not squeamish.

The food is great, and from my front door I can be going past a sign saying “Bienvenue dans le Beaujolais” in 12 and half minutes. And two minutes’ walk and I’m in front of the Cathedral of Saint Jean looking up at the Cathedral of Fourvière. Come on.

Lyon is a magnificent city. Coming from Place Bellecour over to where I live and work I’m thinking, “People come from all over the world to take pictures of where I live.” I’m a lucky boy.

What would you change about Lyon if you could?

I would move the football team back into Lyon. Now, by the time you get back from the match you’ve forgotten you’ve seen it, it’s so far out. They used to be in Gerland.

I think the Lyon football team is an amazing achievement by Jean-Michel Aulas, who has taken a second-division team and qualified for the champions league fifteen years in a row or something like that.

It’s unbelievable what he’s done, and it’s one of the few teams that has done that and makes a profit. In a city that had no football culture. The town of Lyon finished the Opera House before they finished the football stadium.

But it takes so long to get to the pitch that I just don’t go anymore. The stadium itself is magnificent, but it’s a pity it’s so far out.

Throw yourself into it. If you’re moving to France, you’re in France.

It’s not quite as true anymore because there are so many places open that do food or culture from all over the world. But if you’re coming to Lyon, just love it.

If you’re going to be upset that you ask for a steak and everytime it comes out bloody no matter how much you insist, well that’s just the way it is here, so stop ordering a steak. 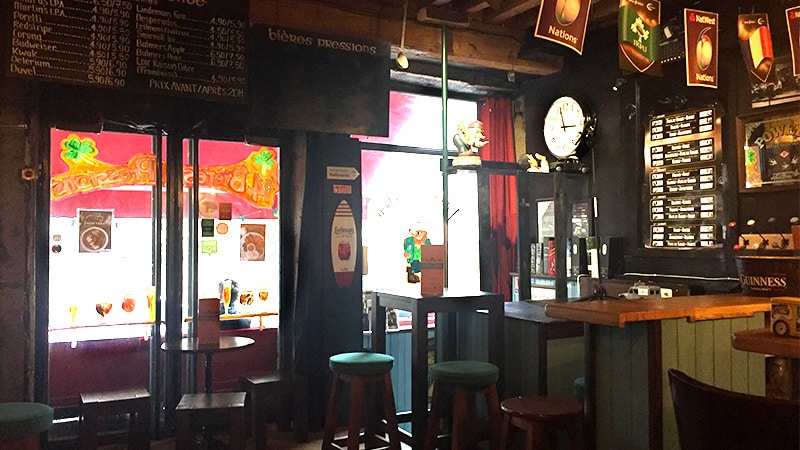 Adrian lives near his bar in Vieux Lyon, and loves that he can be in the center of the city or in the middle of the Beaujolais fifteen minutes out in either direction from his home.

Your family and friends are coming to visit. Where would you take them and what would you show them?

Brasserie Georges, Fourvière, the traboules, all of the regular stuff.

The geographical position of Lyon is one of the best in the world, and that is because you can go in any direction, at any time of the year, and within an hour, you’re in a completely different part of the world that’s still France and French-speaking.

It’s unusual because normally there’s something that’s not nice around, or it’s all the same thing. But here it goes from lakes to full-on Alps, to the Drôme which is mountainous, and then the Pilat is a different atmosphere than the Isère and the Beaujolais.

What’s the best way to explore those places?

If you go on the Lyon tourist website, you find a thing that’s happening just outside of Lyon, little things where all the grandmothers and the kids are all out in the street. That’s France.

An example of this is I had my nieces and nephews and my two kids and we went to Oingt. The day we went, there was the Festival des Orgues de Barbarie.

We didn’t know this was on, and every fifteen meters there’s usually a couple with this organ, and they had songs on sheets and they were handing the songs to the people that were walking through the village, and they put on the song and they’d all sing.

And there was fifty of these. And everyone was getting involved and all the children were singing. It was magic.

There’s something like that on around Lyon or in Lyon every weekend of the year. You just have to find it.

Yes. The city of Lyon has evolved enormously since I came here.

It has moved from a city where people who came here at the time when I was coming here were people who were a bit odd, or people who were pioneers or who didn’t mind the fact that there was a really good chance you’d be sleeping in a cardboard box if you came here, if you couldn’t afford a hotel. There was a lot of difficulty, and that has become easier and easier.

In 1991, nobody spoke English, and no one was open to the idea of foreigners. Not because they were anti-foreigner, but it was just, “We have no idea who you are or why you’re here, and we have no system in place to deal with you.”

There is a real active foreign community here, international community, of people with third-level education who are here for a short time to do their studies or short-term work contracts and that sort of thing, which wasn’t really the case before.

In 1991 there was an Erasmus program, but that was only a couple hundred students and everyone knew everyone, whereas now there are thousands of foreign students from all over the world here. And that’s just the students.