The exhibitions will feature two individual artists as well as a larger compilation taken from the museum’s collection of work.

Continuing a residency program started last year with Olivier Zabat and Lola Gonzalez, the MAC will welcome artist Maïté Marra in residence from March 9 to May 27.

A Vénissieux native, Marra lives in Villeurbanne and studied at L’École National Supérieure des Beaux-Arts (also known as l’ENSBA) in Lyon. She works in photo, film, and screen-writing.

Her residency includes the release of a new film, centered on the place of physical abuse and assault in drawing a line between artwork and reality.

In addition to Maïté Marra’s residency, the Museum of Contemporary Art is also showing the works of Adel Abdessemed in his exhibition called “L’Antidote,” from March 9 to July 8.

Also a former l’ENSBA student, Abdessemed named his show after the bar in Lyon where he met his wife, Julie, during his student years. The exhibition showcases Abdessemed’s personal and private lived experience while also expressing a public and political opposition to violent and authoritarian regimes of all kinds. 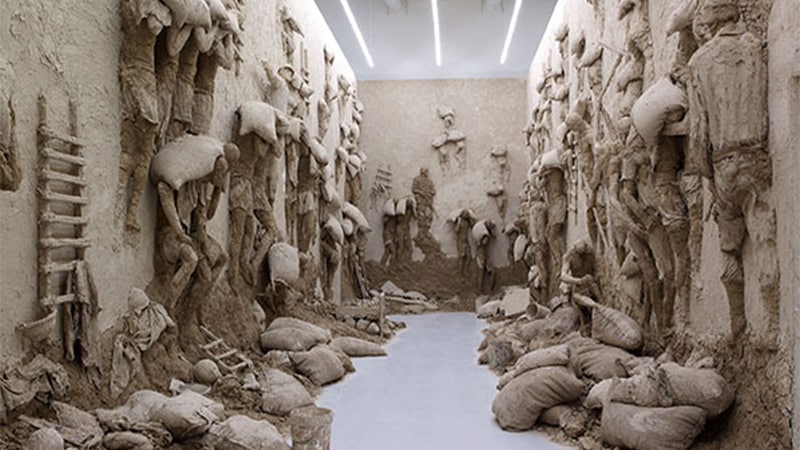 “L’Antidote” is a complement to Abdessemed’s exposition “Otchi Tchiornie,” currently at the Grand Hornu in Belgium. The two can be viewed separately, but together represent Abdessemed’s great artistic and creative range.

Born in Constantine, Algeria, Abdessemed lives and works in Paris. He works with a wide range of materials to create installations, sculptures, and videos representing his understanding of the world.

Collection, a Selection of the MAC’s Prized Pieces

The MAC will also introduce a multi-artist exhibition, called “Collection,” from March 9 to July 8.

This exhibition is made up of the works of many artists featured in previous MAC exhibitions. Its goal is to showcase the diversity of the museum’s acquisitions, spanning everything from traditional painting to digital creations.

“Collection” includes thirty independent works, nine of which were part of the Biennales de Lyon. The pieces are intentionally varied, to represent the evolution of current art to include all mediums, all forms, and all parts of human existence.

The pieces all come from other exhibitions originally conceived, created, and presented in Lyon, and represent the wide range of disciplines practiced by the artists. The museum will hold an inauguration for the expos on March 8 starting at 6:30 p.m.

Adult: €8
Reduced: €4
Free for under 18
Free entry for the inauguration