Among our luxury hotels in Lyon, The Radisson Blu is the place to be if you want to enjoy a breath-taking view of Lyon while staying in the heart of the city and all its attractions. 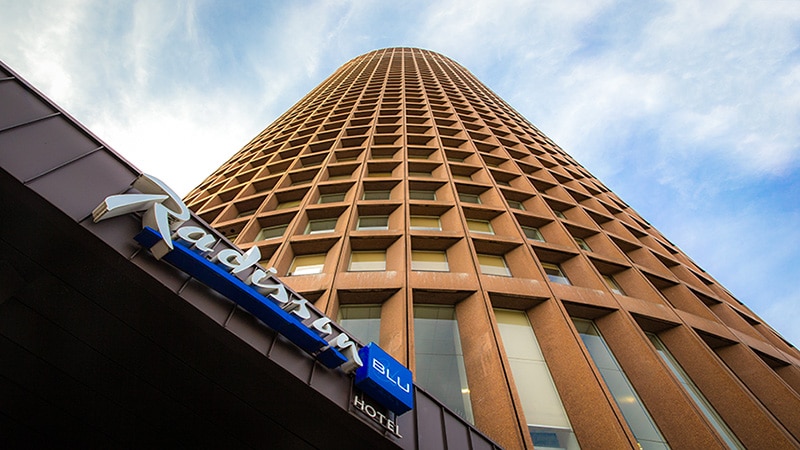 One of our top recommended places to stay in Lyon is the Radisson Blu Hotel, which is known for its high-end service and is part of the international Radisson Hotel Group.
It can be found in the iconic Part-Dieu tower (also known in Lyon as “le Crayon” or “the pencil” due to its shape), in the heart of the city center. This location is especially unique as it is one of the highest buildings in the city and even in France.
The Radisson Blu was built throughout the 8 highest floors of the tower, which makes it one of the highest hotels in Europe. It therefore offers an amazing panoramic view of the entire city as well as the Alps and Mont-Blanc.

The Radisson is a couple of minutes away from the Part-Dieu mall, train station and subway, bus and tram stations. Thus, it is also close to the Saint Exupéry Airport shuttle, which can be found behind the Part-Dieu train station.
This makes it an ideal location: not only can you access all the most important spots and points of interest in Lyon by foot but you also have the city’s very developed transportation system at your fingertips.
This allows you to get to the airport or other famous areas such as Croix-Rousse, the Fourvière Basilica, Vieux Lyon, the Opera and the Beaux-Arts museum in one go. It also makes it so you can easily travel to well-known regional destinations outside of Lyon: the Alps or the Beaujolais vineyards, for example. 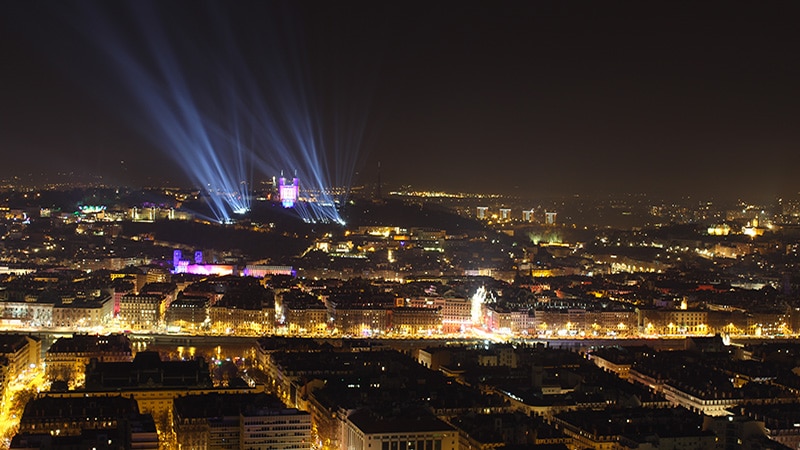 Lyon’s Radisson rooms: made special by their spectacular view

With its redesign in 2016, the Radisson Blu Hotel has earned its 4-star rating and reviews that are through the roof with positivity on Trip Advisor (4/5 rating) and Booking (8,6/10 rating): cleanliness, good food, welcoming personnel, tons of commodities and, of course, an out-of-this-world view of Lyon in its entirety are all on the menu.
It has a gorgeous lobby right under the tip of the Crayon and offers 245 rooms with panoramic views and luxury utilities. This includes 126 Standard rooms, 56 Superior rooms with a view on the Monts d’Or region, 56 Premium rooms with a view on Fourvière and the old city, 7 Junior Suites and 7 rooms which are accessible for persons with reduced mobility. Their size is of 21 to 34 m2 and they can usually host 2 adults. The hotel now also offers Family Suites that combine a Junior Suite and a standard room, connected together.

Services at the Radisson include advantages such as private parking (for 25€ a day), free Wi-Fi, breakfasts to go and quick departures for those of you on a tight schedule, or on the contrary, you can leave later in the day (up until 6 PM) if needed. There is a gym within the facility, accessible to all with cardio-training or weight-training areas and video classes.

You can also enjoy their Celest Bar and Restaurant on the 32nd floor, with the same exquisite view of Lyon as the rooms.
The restaurant is under the control of chef Fabrice de Flue, renowned figure of Lyonnais gourmet cuisine, who uses local products and traditional methods in order to present international meals and flavours.
However, if you aren’t too hungry, you can enjoy a cocktail concocted by Loïc Duschesne, the talented young Chief Barman, accompanied by the Food Corner menu made up of international cuisine classics, in a “Brasserie-Chic” style, and signed by the Chef Fabrice de Flue.
On top of all of this, they have their very own coffee/food shop, an upscale offer and setting, particularly appreciated for business “rendez-vous” during the day.

One Sunday per month, an amazing family brunch takes place in the reception rooms of the hotel, with panoramic views over the city, a large, gourmet buffet for adults and children as well as activities dedicated to kids.

This hotel even offers a welcome pack for children with small gifts and games to keep them occupied.

Its position is right in the center of the commercial district, making it easy to get to the Part-Dieu shopping center and pick up those travel essentials you might have forgotten or those souvenirs for your friends and family, as well as the business district.
What’s more, the hotel has 11 meeting rooms which can host between 15 and 350 people for those of you who would like to organize professional events.
This makes the Radisson Blu Hotel just as perfect for leisure time as it is for more professional stays.

This is Lyon tips and tricks:

By foot, from the Part-Dieu train station, it is ideal to go through the Part Dieu Shopping mall (open from 5am to 1am). You follow the « Passage Servient » sign that leads you directly to the front of the hotel in less than 5 minutes ! Outside of opening hours (7 am – 10pm) you can arrive from the train station by “Rue Bouchut” and take the foot bridge that leads to the front of the hotel.