A visit to the “Palais idéal du Facteur Cheval” in Drôme

Local postman Ferdinand Cheval built an incredible stone palace between 1879 and 1912 in his garden in Hauterives without any architectural knowledge. The “Ideal Palace” is now regarded as an extraordinary example of naïve architecture and has inspired artists for more than a century. 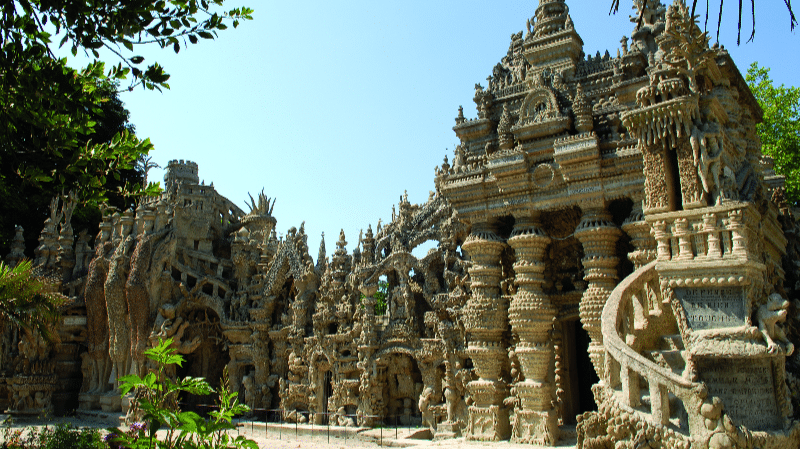 Like a castle an a jungle, the “Palais Idéal du Facteur Cheval” in Drôme. (c) Emmanuel Georges

So what makes Hauterives so special? After all, there is a multitude of rural communities for hikers and nature lovers much closer to Lyon.

The large parking lots along the river filled with tourist buses and cars with very diverse license plates are a first big clue.

The over 150,000 visitors that come here every year don’t just come for the town. They come instead to discover a somewhat unusual monument site you can’t really see from the street because of boundary walls and trees : the Ideal Palace of Facteur Cheval.

The Ideal Palace, a Hindu temple guarded by giant statues of Vercingetorix, Jules Cesar and Archimedes

Visitors with and without an advanced artistic sensibility are stunned the first time they look at this unique stone building. The dimensions are not that large – 26-m high, 14-m wide, 10-m high – but the overall shape seems distant from any reality. 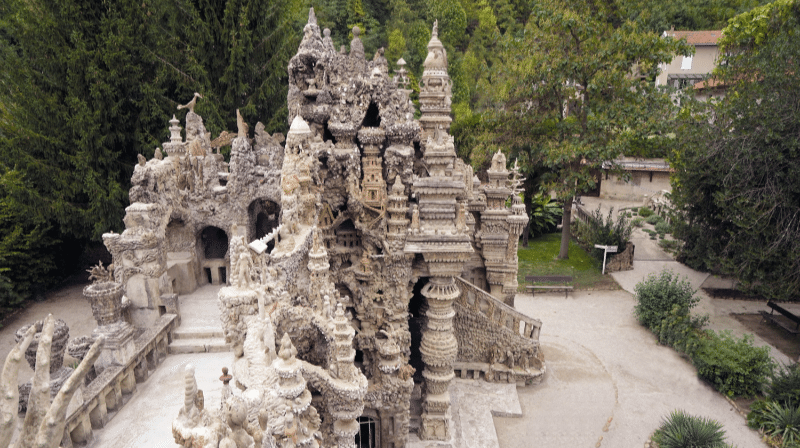 Wandering around the aptly named Palais Idéal (Fairytale Palace), you see a Hindu temple guarded by giant statues of Vercingetorix, Jules Cesar and Archimedes on the east side, a medieval castle juxtaposing a mosque and a swiss chalet on the west side and multiple references to antediluvian times and the Bible.

“Visitors are amazed by the turret towers, the lush vegetation of barbary fig and palm trees pointing at the sky, and the abundant bestiary made of deers, pelicans, phoenixes, minotaur and others strange creatures”, says Yanine Berteling, the palace’s Heritage deputy manager. 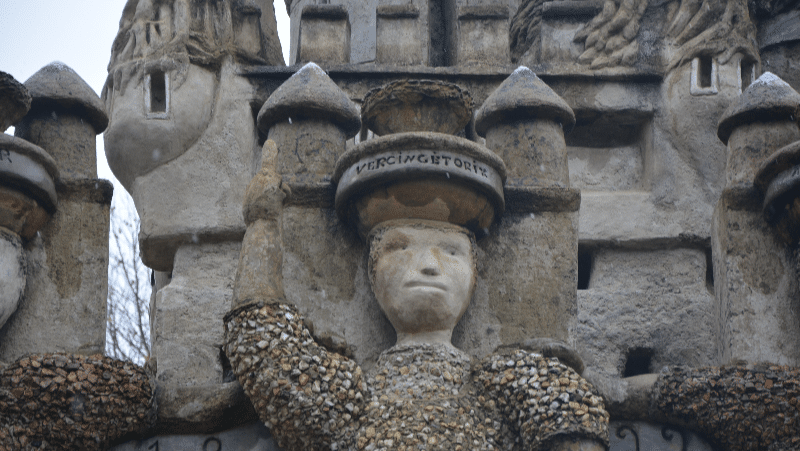 The Vercingetorix statue on the Palais Ideal. (c) Kevin Bonnaud

The primitive art gallery is also worth seeing with its sculpted friezes and chandeliers, dreamlike ornaments and engraved inspiring thoughts like “Fairies from the East are coming to socialize with the West”.

The gallery also includes a lovely niche with a crèche made of shellfish to attract the light. Selfie-takers should walk up the stone stairs to enjoy aerial views and the palace’s towers on the upper terrace.

The palace is a “one-man work” as one inscription indicates: “a man with a very unconventional background”.

Ferdinand Cheval knew nothing about stonework and architecture rules when he started digging a hole in his vegetable garden in 1879.

He was an introverted former baker turned local postman with a strong desire to fulfill a decade-old dream:

“To build a fairytale palace beyond any imagination to demonstrate that someone from a poor farmer family with low education can accomplish exceptional things by working hard, and to ultimately leave a legacy”, Berteling told This Is Lyon.

The postman’s reverie started becoming a reality during one of his daily 30-plus km walks when he suddenly tripped over a bizarre, naturally sculpted river stone.

The 43-year-old man realized that the so-called “stumbling stone” visitors see in the terrace and many other molasse deposits could help shape his dream. 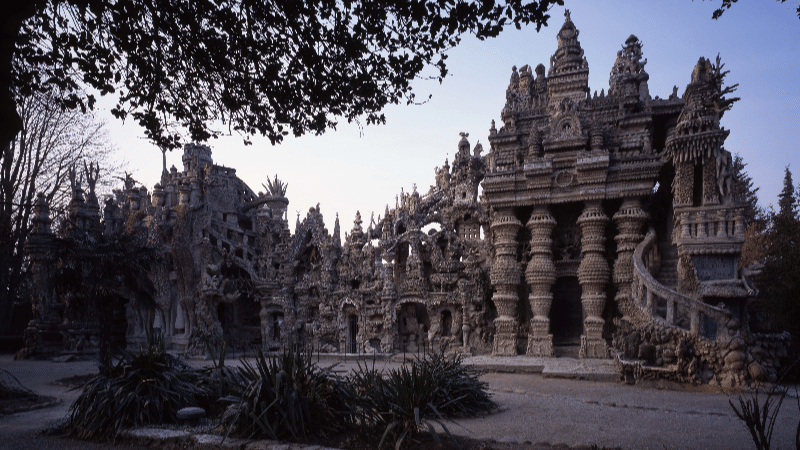 Ferdinand Cheval became an expert by the time he finished his 33-year daunting task, in 1912. (c) Emmanuel Georges

“Cheval starts piling rocks on roadsides and come back at night with a basket and a wheelbarrow”, she adds.

The improvised mason collected tuff rocks, sandstones, black quartz, ball stones and others shaped like sponges or menhirs, and put them together through hand moldings using thousands of lime and cement bags.

He became an expert by the time he finished his 33-year daunting task, in 1912. “the north façade, the last phase of the construction, illustrates a mastering of the materials with a succession of layers and more moldings with less stones”.

That’s probably why the hard-working man started building his own tomb following a deserved two-year break. The tomb where we was actual buried can be seen in the local cemetery, a 15-minute walk from the palace. 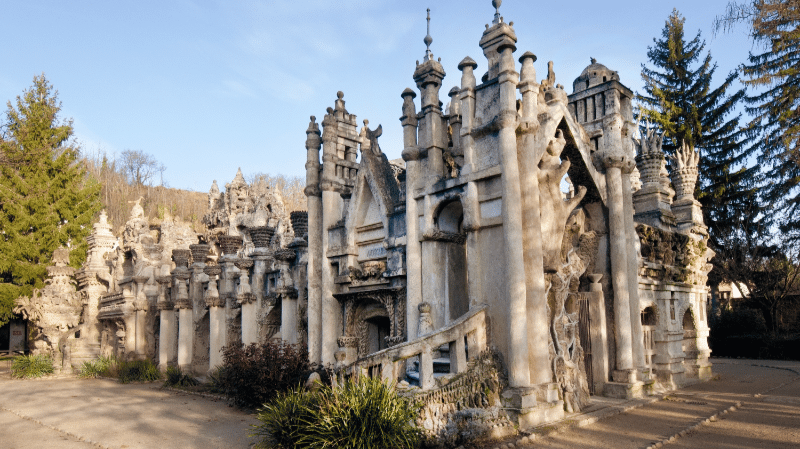 As hard as it is to believe, being a postman was very helpful. Ferdinand Cheval observed the nature around him and paid a close attention to the mail he delivered.

“He read encyclopedia-like magazines such as the Magasin Pittoresque, which included overseas travel stories, history, art and philosophical articles that inspired him for the sculptures and engraved quotes.”

He also used postcards, which had just been introduced in France.

The postman’s incredible story is a subject of a biopic starring Jacques Gamblin and former French model Laetitia Casta, to be released in 2018.

The Palais Ideal inspired Picasso and many more artists

Though Ferdinand Cheval was considered by locals as a “sick man who put stones in his garden”, his lifelong project was well received by the artistic community.

Early visitors and surrealist artists like André Breton, Valentine Hugo and Max Ernst called it a unique piece of art.

Photographs from the palace were shown at New York’s Museum of Modern Art in 1936, a year before the release of twelve drawings from Picasso. Ferdinand Cheval also inspired Niki de Saint-Phalle for the creation of esoteric sculptures in Florence’s Garden of Tarot.

The monument was inscribed in France’s Historic Monuments list in 1969 thanks to André Malraux, the country’s first secretary of Cultural Affairs, who described the site as “the world’s only example of naïve artistic architecture.”

This institutional recognition ensured conservation funds to protect and restore the monument.

Today’s artists are also inspired by what they see as an early masterpiece of Art Brut.

“This outsider art made by mentally-ill patients and dropouts with no artistic culture who, like Ferdinand Cheval, work in solitude as autodidacts”, says Marie-José Georges, director of the Ideal Palace.

Visitors can go to the museum to see art pieces made by in-residence artists showcased during summer exhibitions including an anamorphosis from plastic artist Bernard Pras.

“We recently hosted an artist who is building a city of monuments he visited made of cardboard,” Marie-José Georges adds.

The fairytale’s journey is even more alive on summer nights, as jazz and blues musicians perform on the palace’s intimate stage with lighting and sound effects.