After decades of quick success and business missteps, the Lyon Hockey Club has found its place at the top of the Ligue Magnus table, the French elite ice hockey league, and has recently won the French Cup in 2018.

The Lyon Hockey Club is the city’s professional sports team for ice hockey since its foundation in 1997, following the judicial liquidation of the previous club’s structure, the Club des Patineurs Lyonnais.

Nowadays, the Lyon Hockey Club is divided in two distinct entities : the « Association Lyon Hockey Club », an amateur section in charge of the formation of young athletes, and the « LHC Les Lions », the professional section competing since 2014 in the Ligue Magnus, the French elite ice hockey league. 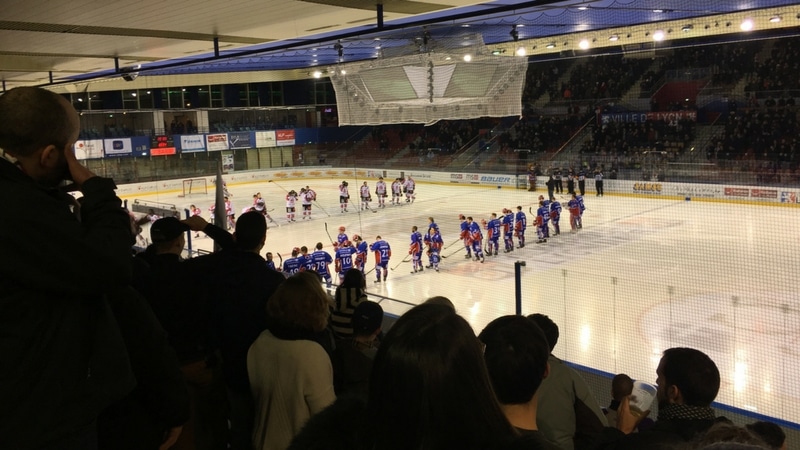 The Lyon Hockey Club team lined up before the puck drop in the Charlemagne ice rink in Lyon.

The Lyon Hockey Club is relatively young but the history of ice hockey in Lyon runs deep.

The Sporting Club de Lyon, one of the very first ice hockey clubs in France, was created in 1903 and participated in the inaugural French championship in 1907.

It became the first ever French champion this year, beating the Club des Patineurs de Paris.

However, the club disappeared in 1908 because of the destruction of the Palais des Glaces, Lyon’s only ice rink (at the time) located on the Boulevard des Belges in Lyon’s 6th arrondissement, near the Parc de la Tête d’Or.

Ice hockey reappeared in Lyon 44 years later, in 1953, with the inception of the Club des Patineurs Lyonnais. The team found immediate success and was crowned French champion in 1956.

It eventually led to the inauguration of the Charlemagne ice rink in 1969, but the club was never competitive at the highest level again. 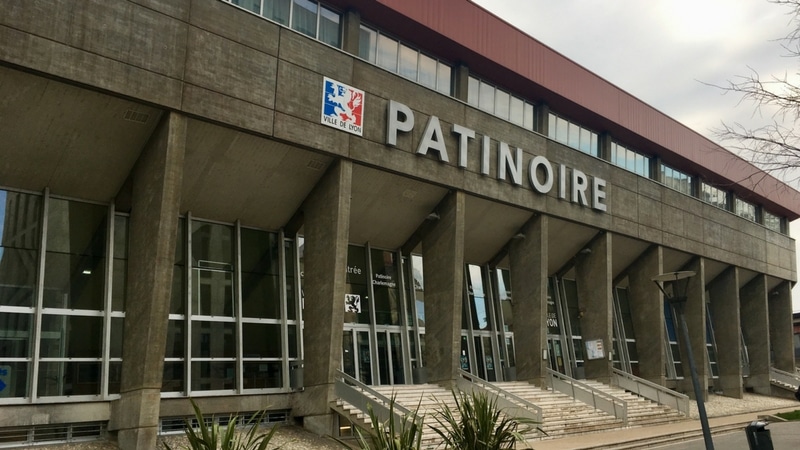 The Charlemagne ice rink is the home of Lyon’s hockey clubs since its inauguration in 1969.

Money issues in 1997 forced the club to close its doors in favor of a new structure, the Lyon Hockey Club.

The fall to the Division 3 for the Lyon Hockey Club

Only three years after the creation of the Lyon Hockey Club, judicial liquidation occurred at the end of the 2000 season and stopped the success of Lyon’s ice hockey team.

The Lyon Hockey Club fell all the way to Division 3 (French fourth division) and stagnated between the Division 3, Division 2 and Division 1 for over a decade.

The Lions then triumphed in the Division 1 during the 2013-14 season, earning the right to rejoin the French elite league, Ligue Magnus, for the first time in 14 years.

The Lyon Hockey Club won the French Cup in 2018

The Lions struggled at first, before seeing a quick ascension through the ranks of the Ligue Magnus.

Relegation was avoided for two straight years in 2015 and 2016, before accessing to the Playoffs in 2017 and 2018. The Lyon Hockey Club ended both years in quarterfinals with the 5th place.

The rise eventually led the team to win the French Cup for the first time in 2018, with a historic win over Gap (2-0) in Paris’ AccorHotels Arena.

A partnership signed with the NHL franchise of Tampa Bay Lightning

An unprecedented partnership was signed in 2014 with the Tampa Bay Lightning, one the most successful NHL franchise in recent history, along with its minor league affiliate, the Syracuse Crunch.

The move was made in order to solidify the professional status of the Lyon Hockey Club. 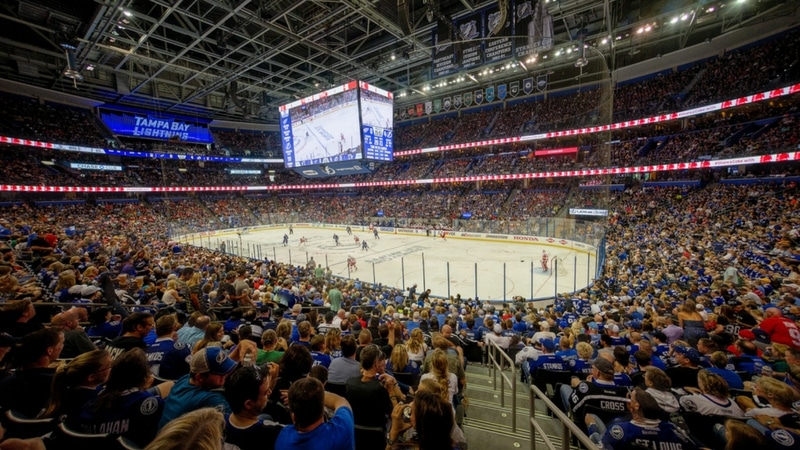 The NHL franchise of the Tampa Bay Lightning is the official partner of the Lyon Hockey club since 2014 – TheTampa2 (Flickr).

The partnership was renewed for three years in 2016 and it includes pre-season training camps and pre-season games between the Lions and the Syracuse Crunch. Business and marketing elements are also tied in this partnership.

The main figures of the Lyon Hockey Club

The current structure of the Lyon Hockey Club was created by Christophe Geoffroy, businessman from Lyon which was the last president of the previous city’s hockey team, the Club des Patineurs Lyonnais.

The poor business management of Christophe Geoffroy led to his firing in 2000, as the Lyon Hockey Club was relegated in Division 3 due to judicial liquidation.

Sébastien Berthet, the new face of the Lyon Hockey Club

His son Sébastien Berthet, former professional player of the Lyon Hockey Club (1996-2000), then followed his footsteps in 2009. He is still at the presidency of the organization today.

His influence had major effects on the Lyon Hockey Club. He led the development of the Lions through the French divisions and built the professional structure year after year. 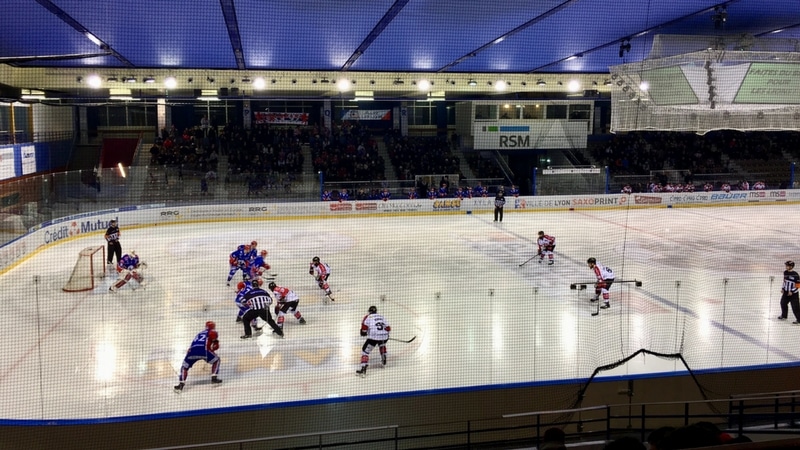 The Lyon Hockey Club reached the quarterfinals of the Ligue Magnus Playoffs in 2018, before looping to Rouen.

Americans and Canadians play for the Lions

French players make up the largest part of the squad, and most of them have played in other Ligue Magnus’ teams.

But, American and Canadian players joined the team in 2017. American-born Trevor Gerling and Jordan Sims, as well as Canadian-born Marc-André Levesque, all hailed from the minor hockey league in Northern America called ECHL.

Arguably the best player of the team is Canadian Dave Labrecque, who played for Briançon, Grenoble and Gap before landing in Lyon.

Launched in 2014 in partnership with the Lyon Hockey Club, the « NRV 97 » is the team’s main supporters group. The name is an anagram for « We will Roar to Defeat » in french.

It fuels the atmosphere in Charlemagne ice rink for home games, and follows the team for each away game.

You are able to join the supporters group for only 10€ a year and offers other advantages year round.

Where to find the Lyon Hockey Club ?

The Patinoire Charlemagne, home of the team since 1969

The Lyon Hockey Club calls the Patinoire Charlemagne home since the construction of the ice rink in 1969.

Home games play out within one of the biggest ice rinks in France, containing 4.200 fans at full capacity.

Located in the southern tip of the Presqu’île, in Lyon‘s 2nd arrondissement, it is considered as one of the hottest spot in the new neighborhood of Confluence, along the Cours Charlemagne, which gives its name to the ice rink.

The Lions in Palais des Sports and Groupama Stadium

The Lyon Hockey Club played in the Palais des Sports of Gerland for the first time in the facility’s history in 2012. The Lions defeated the Bisons of Neuilly (7-2), while playing in Division 1 at the time.

Lyon Hockey Club’s biggest achievement outside of the Charlemagne ice rink was to compete against Grenoble in Groupama Stadium on December 30, 2016, as part of the first French « Winter Game ».

Won by Grenoble, it still owns today the record of the largest attended ice hockey game in France with 25,182 fans in the audience of the Olympique Lyonnais stadium.

How to get to the Charlemagne ice rink ?

Records of the Lyon Hockey Club 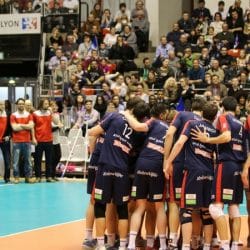 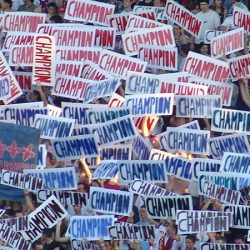 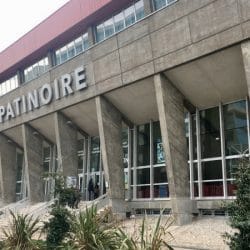 The Charlemagne ice rink provides ice skating, professionnal ice hockey and spectacles on ice in Lyon.     The Patinoire Charlemagne is the major sporting venue in Lyon that combines all the activities on ice. It involves going ice skating with friends or family for an afternoon, attending a professional hockey game with the Lyon Hockey Club […]