“It surprises me how much I like being here in Lyon. How comfortable and how easy it is to live here.”

Haley Peters, scoring leader of the Lyon ASVEL Féminin, has arrived in Lyon less than an year ago but she has already settled in perfectly, on the basketball court and in the streets of Monplaisir, in the 8th arrondissement of Lyon.

This is your first year in France and especially in Lyon. What motivated you to come and play for the ASVEL?

Last season, I was playing in Spain. My agent called me to tell me about the offer from Lyon, and the project here that Tony Parker was buying the team. They had the goal to be the best team in France and, eventually in Europe. That was the interesting thing.

After playing in San Antonio, I had worked with a coach that knew Valery (Valery Demory, head coach of the Lyon ASVEL Féminin) and Guy (assistant coach) very well. He told me that Valery was a very good coach and that I would play well for him, at my position.

The two things, the project and knowing the coach, I decided that it would be a good place to go.

I think any time you’re the foreign player, and the American player, they want somebody good. The team can only sign two non-European players, so they’re careful about who they choose.

Valery knew how I played and how he wanted to use me, it was a good fit. It wasn’t easy but it has been a good fit for me, a place where I can play and do many different things.

How would you describe the team’s season? And of course, how about your season?

I think we’ve been growing all season, it’s a young team and it’s the first time all of us have been playing together.

Before this season, I had never played with anyone (on the team) and that’s true for most people on the team. It took some time for us to learn each other. We were up and down a little bit. 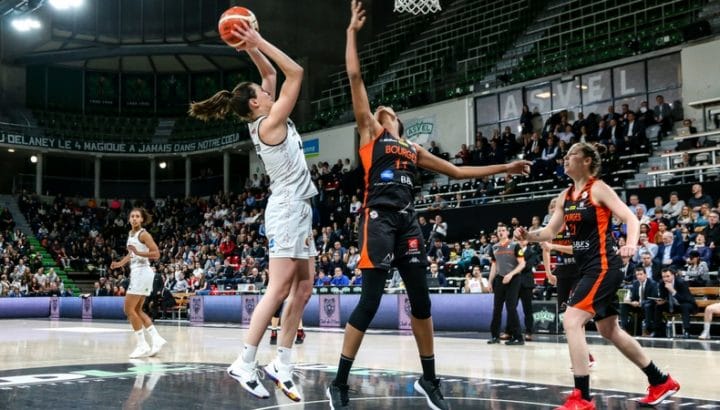 Haley Peters confident in the Lyon ASVEL Féminin chances for the rest of the season.

But since January or February, we’ve really found ourselves in how we can play. We are in a good moment.

I think I’ve been the same for most of the season : consistent.

I’ve moved around in my position a little bit. It’s been a challenge but we have two coaches that are really experienced and they’ve helped me to do just that. They taught me a lot.

The ASVEL is heavily engaged in community work throughout the season. How important is it to help out the surrounding community?

They do a lot of things here and I like it.

After the game, we always have things going on and the younger team is always around. I like being around the project they are trying to grow. There are a lot of ambitions. It’s a fun thing.

Especially as I get older, you realize that someone was doing it for me when I was younger. It’s a good reminder of why I started to play, and I always had someone to look up to.

Now that I am someone that younger people are looking up to, it helps you remember why you’re doing it. 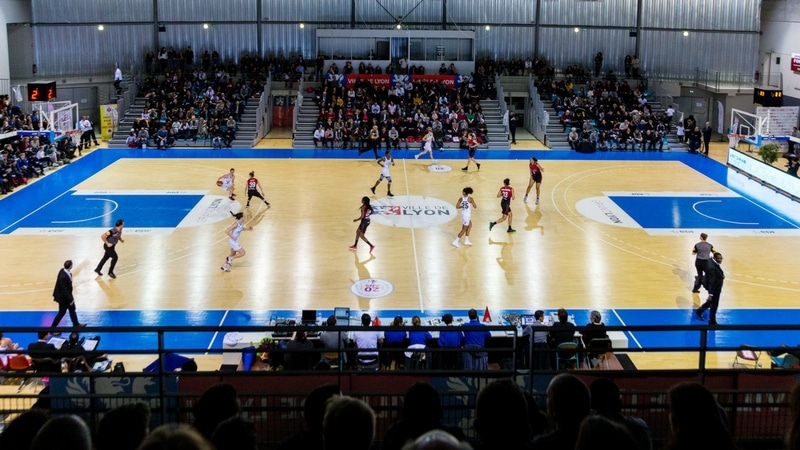 Was the city of Lyon a big part of choosing to move here?

Sometimes when you’re playing professionally, you play in really small towns. My first year playing, I was in a very small town in Spain where no one was speaking english.

To be in a big city like Lyon, it was exciting for me to have the chance to see a beautiful place.

To be honest, before my agent called me, I didn’t know anything about Lyon. I didn’t know that it is was as big as it was, like the second or third biggest city in France. I had no idea. We usually talk about Paris, the South of France, Normandy, but as soon as I knew I was coming here, I started reading things and looking at things.

The main thing everyone talks about is the cuisine in Lyon and I was excited for that. And also cheese, wine and chocolate, three things I love. *laughs*

How did settling in Lyon go?

It was fairly easy.

Any time you move somewhere, you have a month or so when you can figure it out. We have a group of girls that made it really easy, and the coaches, too.

The city is very easy to get around with the tramway and the subway. I’m from New York, it’s much easier here and much cleaner.

Have you found an American community in Lyon ? Do your family or friends come to visit you here?

I know a few Americans that are here. I actually have a friend that I went to school with at Duke who is working here. I’ve seen him a couple times. And there are Americans playing for the ASVEL in Villeurbanne, too.

The first week I was here, I had friends coming to visit. My parents and my brother have come. 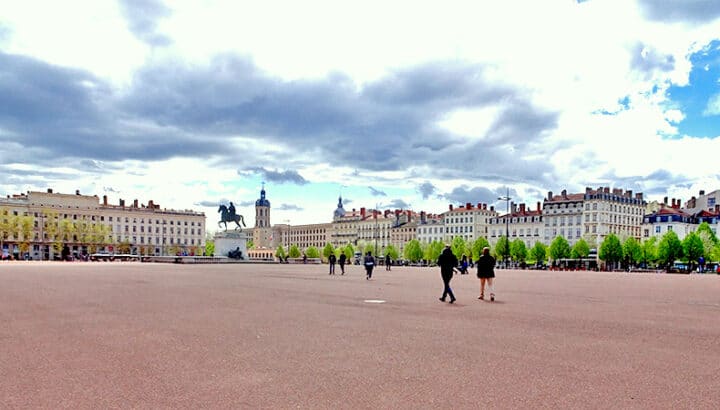 Discover the many arrondissements of Lyon

Everytime someone comes, we go to see as much as we can of the city. Place Bellecour where the big wheel is, always to Fourvière, the Rue de la République towards the Opera.

And my mom loves the Croix-Rousse!

What surprised you the most in Lyon?

I don’t know… I had seen pictures of Lyon before.

Less people speak English in France than in Spain, it was surprising to me. It was very hard to communicate, which is not really a good thing *laughs*.

But people were very friendly and helpful, anyway.

You attended an Olympique Lyonnais soccer match last month with the ASVEL. What do you do in Lyon when you’re not playing?

I’ve been able to travel a good amount this year when we had some weekends off. I went to Annecy with my mom during winter, it was cold. I went to Geneva and Amsterdam, also.

And if I’m staying in Lyon, we go to eat in the city, go shop or go walk around in the Parc de la Tête d’Or now that it’s getting nice out.

We are supposed to go to the mountains, Valery said, because we have a day off. Just to relax.

I’m happy that it’s getting warmer but we can go to the snow for one day.

Where do you go to work out? Could you make a list of your favorite places to work out in Lyon?

I don’t go workout much except in Mado Bonnet.

If I want to go ride a bike, along the river or up to the Parc de la Tête d’Or. My favorite place would be the park or the riversides. 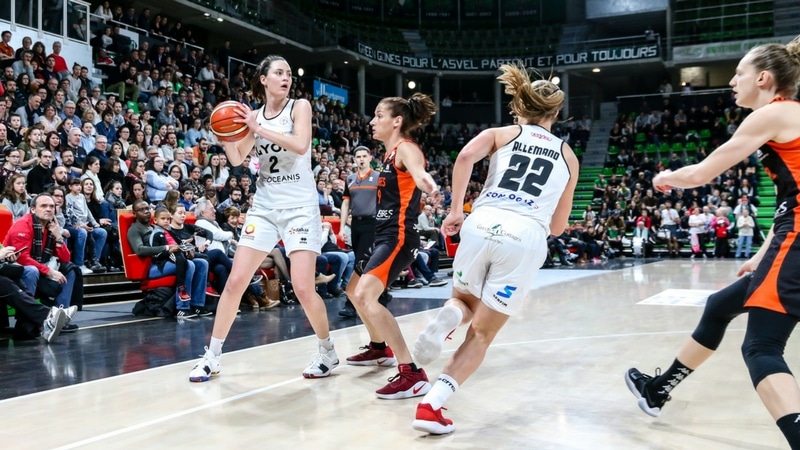 Haley Peters is one of the key players for the Lyon ASVEL Féminin in 2018 – Infinity Nine Media, Alexia Leduc

What are your favorite places in Lyon to spend time (eating, getting coffee or a drink, etc)?

There is one place on the place Ambroise Courtois in Monplaisir (in Lyon’s 8th arrondissement), where I live, and also the Bistrot Autrement. We like to go there for a restaurant and that’s the place we go on a regular night.

Sometimes, we go out at night… but don’t tell anyone ! *laughs*

We’ve been a couple times to the Barrio and to NH Club (The New Hollywood, in the 8th arrondissement), this is the place where all the basketball players reunite.

What would you take away from this experience in Lyon ? And do you plan on staying in Lyon in the future?

Lyon is a place I would like to come back to, for sure.

It surprises me how much I like being here in the city. How comfortable it is, how easy it is to live here. I’ve lived in different European cities and this is the biggest one by far. But it is still very easy to manage.

I’m used to New York. That’s what I’m comparing it to.

It’s a city but it has very different neighborhoods. I like living in Monplaisir because it feels like its own part of the city. It’s easier if you want to just walk out without going into the real city.

If you have to describe Lyon in a few words, what would it be?

Lyon in a few words ? I would say beautiful, convenient and friendly.