The Skatepark of Lyon, multidisciplinary meeting point for urban sports

The city of Lyon supported the construction of the Skatepark of Lyon in the early 2000’s and urban boardsports have now found a seasonal home in the middle of the Parc de Gerland, at the intersection of all the urban sports cultures.

The Parc de Gerland, in the 7th arrondissement, hosts many sports in Lyon and the Skatepark of Lyon elected home in the green park along the Rhône since the structure’s creation in 2000.

Skateboards, BMXs and scooters gather and reunite all year long in the sporting venue, which became one of the first closed skateparks inaugurated in France thanks to the help of the city of Lyon. 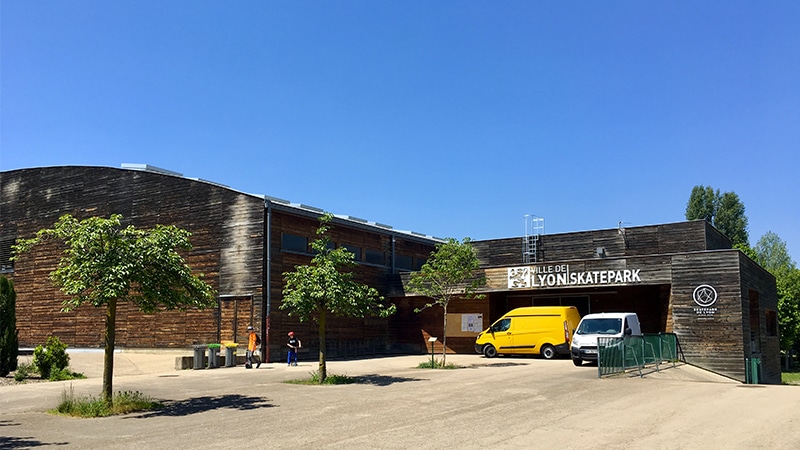 The Skatepark of Lyon, to bring urban sports in a closed structure

Created in 2000 with the help of the city of Lyon

The municipality of Lyon, which subsidized the construction of the sporting venue, outsourced the management to the « Association for the Development of Roller-Skate-BMX », affiliated to the French Roller and Skateboard Federation.

Many modifications and enhancements were brought year after year, with the last complete reconstruction of the inside structure in 2015.

Three different sections for a total of 1,500 squared-meters are built next to each other inside the Skatepark of Lyon.

The street section, on one side of the skatepark, offers guardrails and different types of platform units for the skateboarders pleasure. The contiguous « bowl » is one of the few located in Lyon, and the only one constructed in a closed structure. 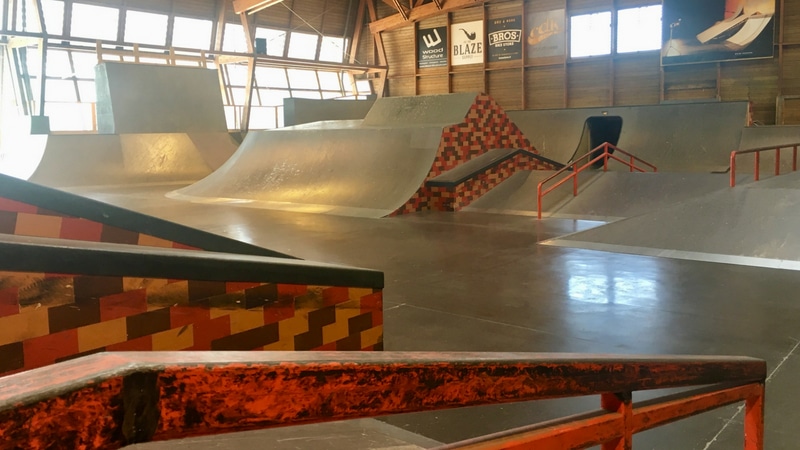 The 1,500 squared-meters of the Skatepark of Lyon is the playground of skateboard, BMX, roller and scooter riders – ©Aloïs Piet

On the other side of the skatepark, the aerial section provides a mix of high drops and tall units, which is perfect for BMX riders and courageous scooter riders.

The structure might not be the easiest way to begin skateboarding or scooter riding, since the sections are more difficult than what is available in the streets.

20,000 entries in the skatepark every year

The Skatepark of Lyon counts approximately 20,000 single entries every year, with a peak of 22,000 entries in 2010. On top of single entries, an average of 4,000 annual subscriptions are contracted ever year, which are necessary in order to enter the skatepark.

The winter is the busiest season of the skatepark, with an average of 60 riders for each session during the week days. Peaks of 200-250 entries during winter weekends are rather common.

Local riders constitute the overwhelming majority of the public, especially from the Gerland neighborhoods. Some national riders visit the sporting venue in the context of punctual events, while international riders come to the skatepark whenever they visit the city of Lyon.

The association has to rely entirely on single entries and subscriptions to manage the structure on a yearly basis, partly because the cost of operations is not covered by the municipality’s subsidies.

The main figures of the Skatepark of Lyon

Skateboard, BMX, scooter and roller communities in the Skatepark of Lyon

The many urban boardsports communities have found a common place to practice their sports, no matter which weather conditions. Skateboard, BMX, scooter and roller riders all come to the Skatepark of Lyon, some sporadically and some on a daily basis.

Skateboarders are the major face of the skatepark with a linear frequency since the beginnings, as well as the BMXers, to a lesser extent. However, young scooter riders outnumber every other urban riders since the explosion of the sport in the early 2010’s.

Tournaments and events are held frequently in the Skatepark of Lyon. The French championships in skateboard (street or bowl) happen every year, among other skateboarding contests between the skatepark’s subscribers.

A stage of the French championships in roller also stops in Lyon.

The CDK Infest, one of the top scooter events in France, and the BMX Street Station are other major annual events in the Skatepark of Lyon.

Two schools of skateboard and roller

The Skatepark of Lyon has opened two schools in urban sports during the last decade.

Managed by Mathieu Hilaire, former pro skateboarder and holder of a State diploma, the skateboarding school opened in 2005 has become one of the national flagship structures and entered the « Nike Honor Roll Skate Club », which represents a network of skateparks as well as quality and trust certifications.

Led by passionated volunteers and instructors certified by the French Roller and Skateboard Federation, a roller school was opened in 2013 and provides teaching lessons to learn and progress on rollers.

Where is the Skatepark of Lyon?

The Skatepark, in the heart of the Parc de Gerland

Many sporting structures emerged in the Parc de Gerland, in the southern part of the 7th arrondissement, within the neighborhood of the same name. The Skatepark of Lyon joined the Stade de Gerland and the Palais des Sports as the neighborhood’s main attractions. 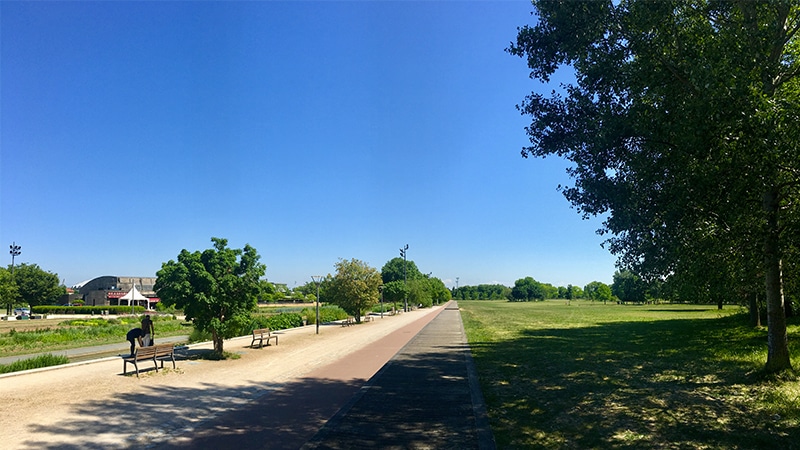 The Skatepark of Lyon (left) is located in the heart of the Parc de Gerland, in the 7th arrondissement – ©Aloïs Piet

The three venues compose the largest sporting complex of Lyon, along with other infrastructures such as playgrounds and the former Olympique Lyonnais training center, Tola Vologe.

It takes approximately 15 minutes by car to reach the Parc de Gerland from the Hôtel de Ville, in Lyon’s 1st arrondissement, and 10 minutes from Place Bellecour, in Lyon’s 2nd arrondissement.

How to get to the Skatepark of Lyon by car

You can get to the Skatepark of Lyon by car, using two different routes.

Coming from the north and west, the stadium can be reached from Lyon’s highway, exiting at the « Musée des Confluences » interchange and then driving towards the Tony Garnier concert hall and the Tony Garnier avenue.

The parking structure is located in front of the Palais des Sports and Stade de Gerland. You would then need to walk towards the green park and follow the signs to the skatepark.

How to get to the Skatepark of Lyon by public transportation

The easiest way to reach the Skatepark of Lyon might be by riding directly to the venue, but it is possible to reach the structure through public transportation.

The metro line B stops at « Stade de Gerland », which is 500 meters away from the skatepark’s entry. The same metro line goes through the Part-Dieu train station and it takes you 10 minutes to reach the skatepark.

The Presqu’île is only 10 minutes away from the skatepark, by taking the metro line D from Bellecour and switching to the metro line B in Saxe-Gambetta.

Free entry for girls after subscription.

Extended hours during school holidays: 2:00 pm to 10:00 pm from Monday to Saturday.

The Complete Guide to Urban Boardsports in Lyon

All the places to skate in Lyon… and much more! 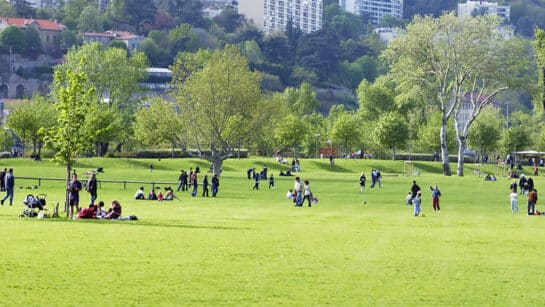 Lyon’s riverside park dedicated to sports, family leisure activities, picnics, plants and flowers.       Description The park area is situated next to the Stadium of Gerland, former home to Lyon’s football team Olympique Lyonnais and home of LOU Rugby as well as the Palais des Sports, an indoor sporting arena and la Plaine […]