Where to Go Cycling from Lyon

Explore the suburbs in order to enjoy the top routes of cycling in Lyon, all starting from the Presqu’île.

Bike enthusiasts do not lack of opportunities for cycling in Lyon. Along the rivers or across the parks, following the ViaRhôna or exploring the nearby hills, any sunny day can lead to cycling excursions in the green suburbs.

Cycling in Lyon is such a treat, as much as any other sport in Lyon. The city and its surroundings provide a large variety of sceneries, with flat routes along rivers and lakes or uphill climbs all over the Monts d’Or and Monts du Lyonnais.

Grab your bike and explore the region with a list of the best routes for cycling near Lyon.

An interactive map of the different excursions awaits at the bottom of the article.

Cycling north or south along the ViaRhôna

One-way trip of 25 kilometers from the Presqu’île

The ViaRhôna, a 800-kilometer cycling route from Lake Geneva to the Mediterranean Sea in the Camargue region, crosses Lyon along the Rhône river from the north to the south (or vice versa). 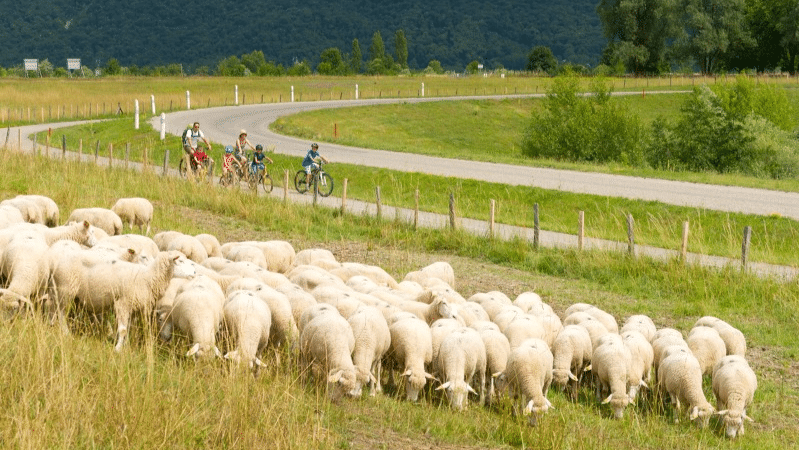 The ViaRhôna cycling route explores the countryside of the Rhône Valley, before and after the city of Lyon – ©Christian Martelet

Anyone can experience one of the most famous bike routes in Europe from the Lyon city center. The « green path » towards Geneva cuts across the Grand Parc of Miribel-Jonage and leads to the city of Jons, marking the entry of the wild Rhône river into Lyon.

The Grand Parc of Miribel-Jonage offers four different cycling tracks up to 30 kilometers across the largest green park of Lyon.

Enough of cycling after this 20-kilometer journey to Jons? Ride to the nearby town of Montluel and hop on the train to the Lyon train station for only 5€ per person.

One-way trip of 15 kilometers from the Presqu’île

The ViaRhôna also follows the Rhône southbound to the historic cities of Vienne and Saint-Romain-en-Gal, in which stands a renowned Roman Museum.

Reaching Vienne takes 35 kilometers, a distance that can be hard to tackle ; amateurs and families may wish to settle for a ride to Vernaison, in the south suburbs of Lyon.

The Musée des Confluences as well as the Parc de Gerland and the Edouard Herriot harbor in the rearview mirror, the Rhône riversides will appear again. The northern tip of the Ile de la Table Ronde shows up after the town of Saint-Fons and happens to be a great playground for further exploration in the middle of the river, until the quiet town of Vernaison.

Train tickets to the Lyon train station from Vernaison only cost 3€ per person, and 7€ from Vienne.

Explore the Saône riversides by bike

Round trip of 16 kilometers from the Presqu’île

It’s flat, directions are easy to find and there is no shortage of nature on the way to Ile Barbe: all of these arguments make the ride along the Saône river to the north one of the most enjoyable cycling path in Lyon.

The Saône riversides reach the Ile Barbe and are mostly paved, which makes a good compromise whether riding a mountain or road bike. Although the pavement disappears after Pont Schuman, road bikers are able to keep cycling to the destination on the roads of each side of the river. 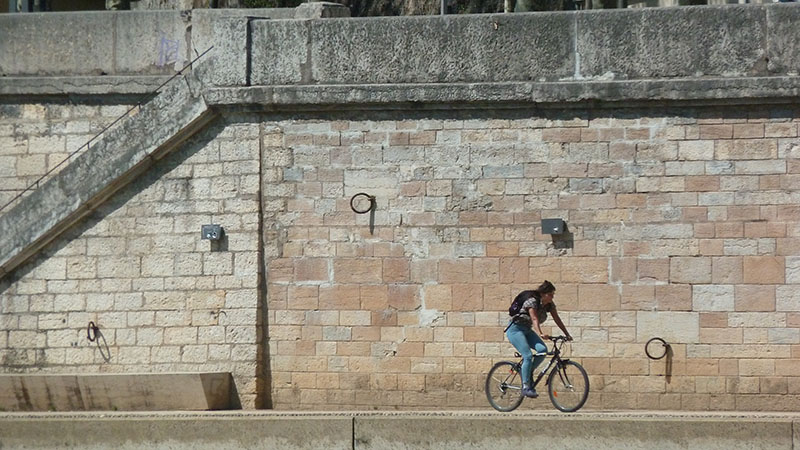 A resting stop at the Auberge de l’Ile Barbe, next the island chapel, or at the local restaurant on the west banks of the Saône, is a perfect activity to enjoy the calmness and the vegetation of the deep Vaise neighborhood.

Along the Saône to Neuville-sur-Saône (2 hours)

Round trip of 25 kilometers from the Presqu’île

The Saône riversides, due to its topography and its easy access from the Presqu’île, represent the exit door of Lyon for bikers looking for longer and scenic cycling routes.

Road bike trips along the Saône are popular among locals, down to the river on the east bank and following the cycling path on the west bank. The northern countryside of Lyon appears after Ile Barbe and the scenic villages of Fontaines-sur-Saône and Rochetaillé are to be found on the way to Neuville.

This route does not involve any difficulty and the city center of Neuville makes up for a great lunch stop.

Short excursions from the Lyon city center by bike

Towpath towards the Grand Large in Décines-Charpieu (2 hours)

Round trip of 35 kilometers from the Presqu’île

The urban infrastructures of the Lyon city center is not the perfect place for biking. However, hop on your mountain bike and ride towards the green parks of northern Lyon.

The famous Parc de la Tête d’Or and the wild Parc de la Feyssine is an excellent start for an session, before finding the canal near the flea market of Les Puces du Canal. A peaceful towpath guides the cyclists towards the Grand Large lake, in Décines-Charpieu. 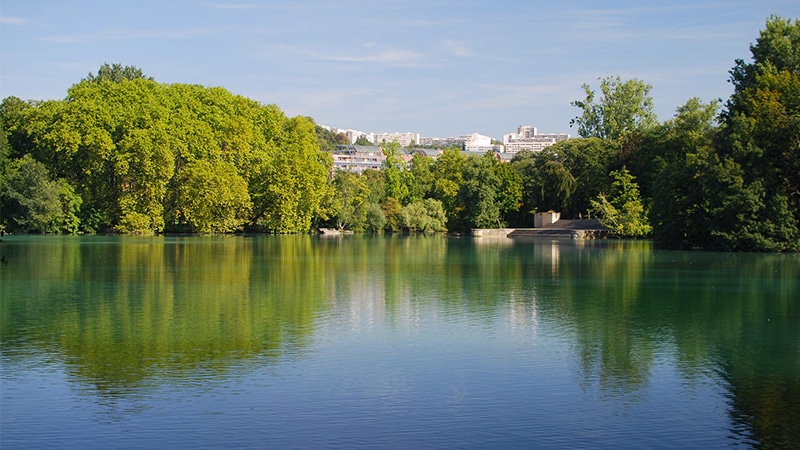 The Parc de la Tête d’Or, although busy on most sunny days, remains an excellent exit door of the urban life in Lyon.

It is possible to bike around the lake and then come back to the Lyon using the same path the other way around. This flat circuit of 35 kilometers is convenient and without cars, perfect for a 2-hour trip on sunny days.

A quick detour to the nearby Groupama Stadium could be a good idea to motivate the kids.

Cycling on the Monts d’Or: Mont Verdun and Mont Thou (2 hours)

Round trips of 25 kilometers each from the Presqu’île

Looking for uphill climbs in the vincinity of Lyon? The nearby Monts d’Or provides the best challenges within 2 hours of cycling from the Presqu’île.

The route to the Mont Verdun, above Limonest in the city’s west suburbs, begins near Vaise towards Saint-Didier-au-Mont-d’Or. The road going to the summit of Mont Verdun is closed to traffic from April 1st to October 31, making it the hotspot for speed riders and cyclists during the summer. 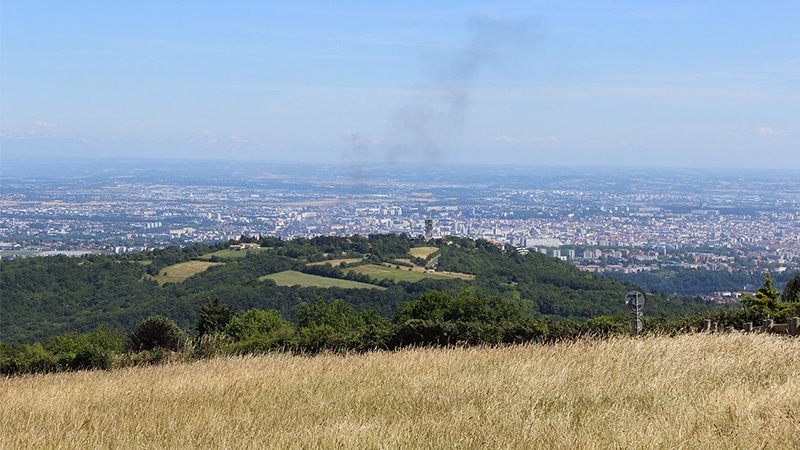 The summit of the Mont Thou, in the nearby Monts d’Or, offers a panoramic view over the metropolitan area of Lyon.

The second highest summit, the Mont Thou, is arguably the most renowned Monts d’Or hill for bikers.

Many roads exist to reach the summit, but climbing the hill from Couzon-au-Mont-d’Or and then going down to the Saône river across Saint-Cyr-au-Mont-d’Or can be a great way to discover the hilly side of Lyon.

More to know about cycling in Lyon: 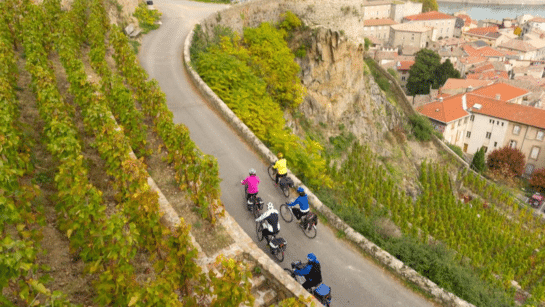 A nature route stretching from Lake Geneva to the Mediterranean. 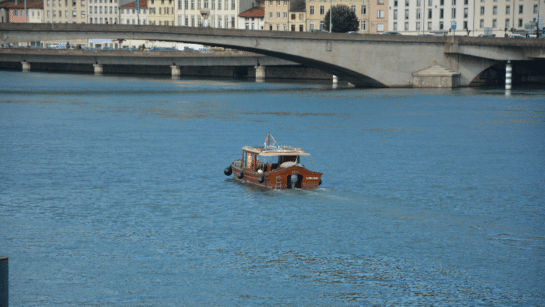 See the Rhône Valley like never before from land and water.