Here are 5 things you can find to eat and drink while strolling around the streets of Lyon during the Festival of Lights.

Impossible to miss during the Festival of Lights. Mulled wine sellers can be found on every street corner selling this hot beverage with a hint of cinnamon, orange and citrus for about 2 or 3 euros.

Lower in alcohol content when it’s heated for long periods, mulled wine can nevertheless make your head spin a little if the chef adds a little rum. There is also a white wine version or an alcohol free version made from apple juice. It’s perfect to warm you up during the illuminations. 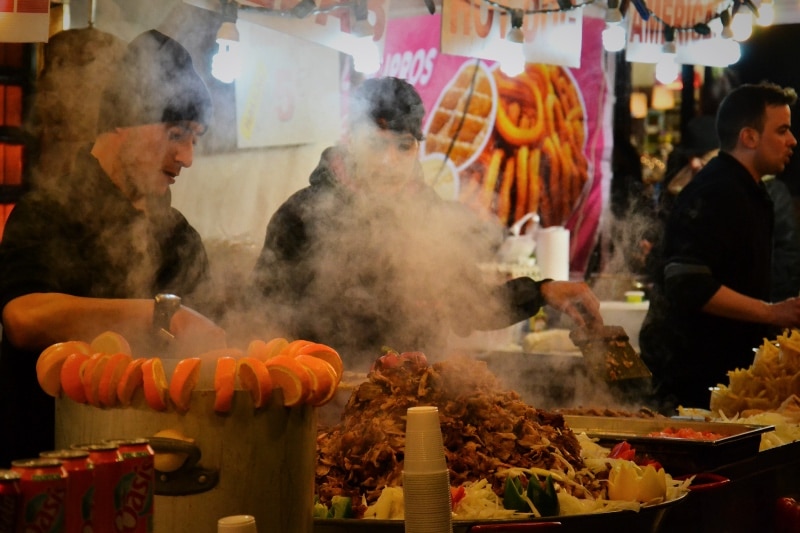 Kebab and mulled wine sellers in Lyon (France) during the Festival of Lights. (c) Frederic Crouzet

Very popular in Lyon, this German/Turkish sandwich is available from many mobile vendors. It comes in the form of a half a pitta bread, stuffed with veal meat (or sometimes chicken) which is cooked on a huge rotating spit. The classic version comes with lettuce, tomatoes and onions (raw) and is covered in a white sauce made of yogurt and herbs. You can also add spicy Moroccan harissa, mayonnaise, hot samurai sauce or curry sauce. You can also request French fries added into the sandwich to really fill your stomach!

Be warned, the French hotdog is very different from the classic American version. There is no soft bread roll, beef sausage and large pickle. In France the sandwich is made using a piece of baguette, the inside heated on a hot spike. The sausage, often pork, is cooked by steam and slid inside the hole in the middle and smothered in mustard (strong), ketchup or mayonnaise.

This traditional French dish is also a part of Lyons culinary heritage. Onions, water, flour, bread and cheese are the ingredients of this soup which is also referred to as “gratinée”, because it’s made even better by being heated in the oven to melt the cheese. Street sellers offer this in small polystyrene bowls and its perfect for warming you up.

This young wine is not sold on the street so you will need to push open the door of a restaurant or bistro to taste this light wine which has divided France for more then 50 years.

Considered to be a festive and rather light wine for some or slightly spikily and acidic for others, Beaujolais Nouveau is sold beginning from the third Thursday in November, just a few weeks after the gamay grape harvest in the vineyards north of Lyon.

It should be noted that in Lyon this wine can be ordered by the glass, by the bottle or especially in 46cl carafes called a “pot” and pronounced “poh”, which is a local particularity.

So you can ask for a “pot of Beaujolais”, a “pot of Côte” (du Rhone) or more surely a “pot of Saint Jo” referring to Saint Joseph, the highly reputed wine which comes from the area south of Lyon.