10 Cool Things To Do In Lyon in August

August in Lyon is one of the calmer periods of the year as many locals head for the beaches and mountains. The city has much less traffic and parking is a lot easier making it a great time to take advantage of the many cool things happening including music festivals, football matches, canoe trips on the river and activities perfect for all the family. Beat the crowds and make Lyon your destination for some summer fun in the sun.

By Simon Widdowson and Frederic Crouzet

Music in August in Lyon

A fabulous summer music festival over the weekend of August 25th, 26th and 27th in the natural setting of Grand Parc Miribel Jonage on the outskirts of Lyon. 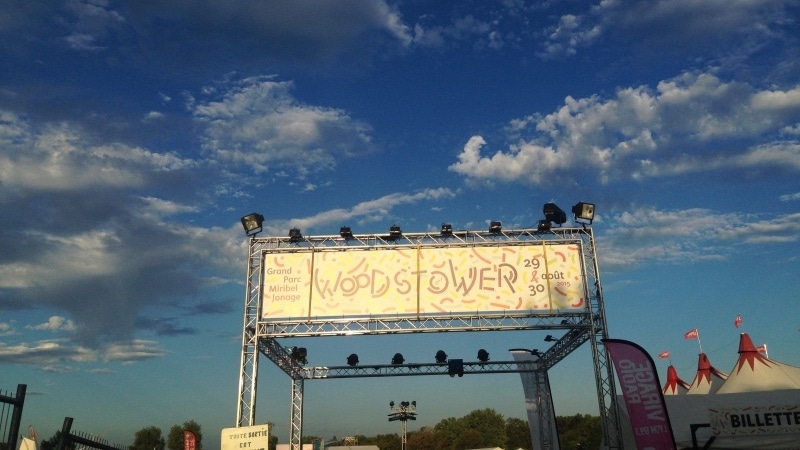 There’s a wonderful mix of music taking place on several different stages to suit all tastes and ages including the electro dance of Greendaddy, the chillwave of Mome, Hip Hop from Deen Burbigo and the disco pop of Corine.

There’s street theatre and delicious food vendors and if the excitement gets too much you can simply chill out on the beach next to lake. A ticket for all 3 days is only €40.  and all the info can be found here.

Le Sucre has a stylish rooftop bar at the heart of Lyons modern electronic music scene. Located in the new contemporary art district near the Confluence Museum Le Sucre is a great place to unwind with a cocktail on Thursdays, Fridays and Saturdays and later on in the evening there are some excellent concerts. 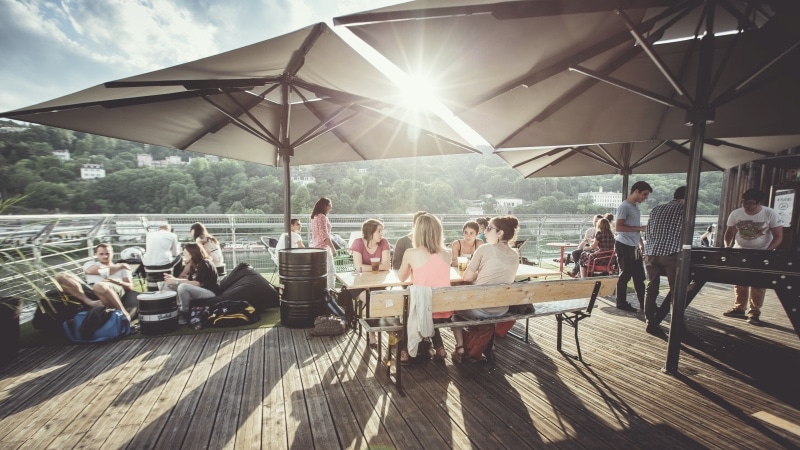 The month of August sees several internationally acclaimed artists performing including Detroit Swindle on the 11th, Fort Romeau on the 18th and Pional on the 25th.

Admission to concerts is free if you arrive before 10pm. Sunday night is film night and during August you can catch modern cinema classics such as Die Hard, Speed, To Live and Die in LA and True Romance.

Every Monday, Friday and Saturday at 11am and 3:30pm you can take a guided tour at La Maison des Canuts in la Croix Rousse and see the workings of the silk loom and discover Lyons famous silk making history.

It’s the only place in Lyon that still has an operational “Jaquard” silk weaving loom and after your visit there’s a guided tour at 4:40pm of the traboules, or secret passageways of la Croix Rousse leading you down to Place Terreaux for 6pm. 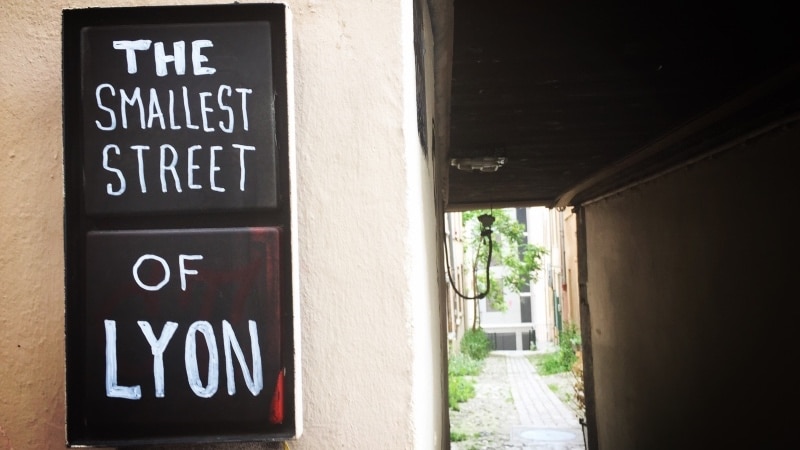 Your visit includes stories of the French resistance in Lyon during World War II and it makes for a fascinating glimpse into Lyons rich past.

Celebrate mass and the Assumption at Fourvière

The Assumption of Mary into Heaven, often shortened to the Assumption and also known as the Feast of Saint Mary the Virgin is celebrated with a flaming torch procession in Lyon on Monday August 14th at 8:30pm. 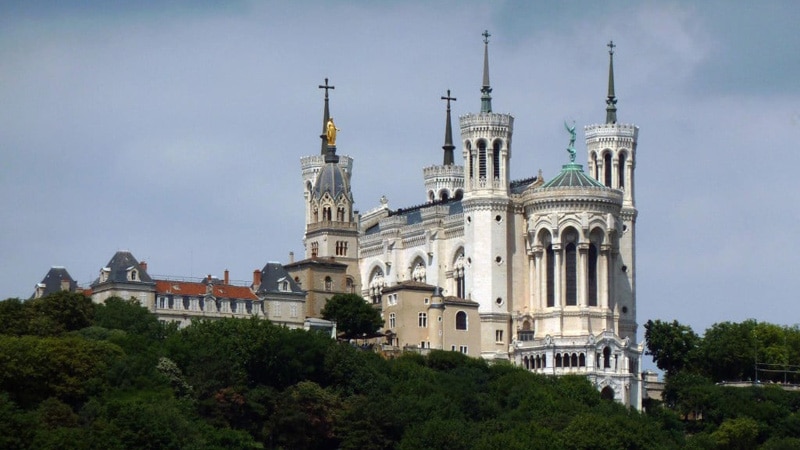 The walk begins at the Rosaire Gardens and culminates at the magnificent Basilica of Fourvière, high on the hill overlooking Lyon.

You can also attend mass at the Basilica on August 15th at 7:30am, 9:30am, 11am and 5:30pm. Its one of the most important days in the Catholic church calendar and whether it aligns with your beliefs or not its still a touching event that captures some of the soul of Lyon.

Take to the water and discover Lyon by canoe

For a very different experience of Lyon, take to the water and paddle your way around the rivers Rhone and Saone taking in the cities wonderful architecture and monuments.

Lyon Canoe, which is located at rue Antonin Perrin in the 7th arrondissement offers guided river trips by canoe, kayak or paddle board. 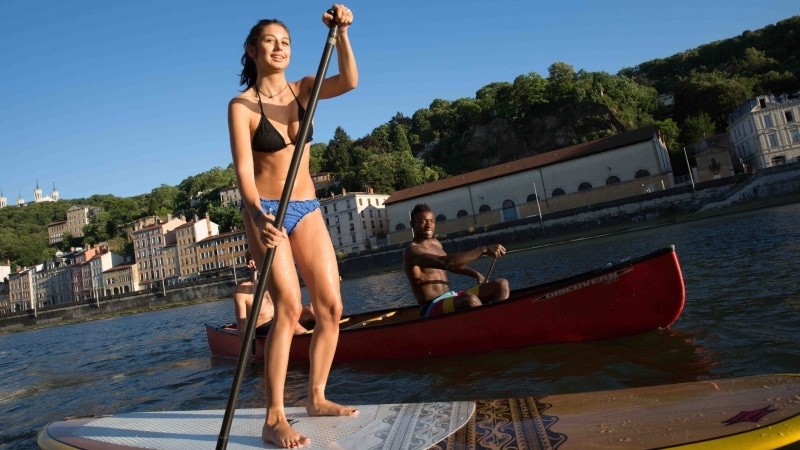 Paddle on the Saone river in Lyon. (c) Lyon Canoe

It’s an invigorating experience on the cool summer city waters and offers great views of the Confluence Museum, Ile Barbe and Vieux Lyon.

There are different tours available all about 2 or 3 hours long and the cost is 28€ to 48€ per person depending on which tour you take.

All equipment is provided, you just need to bring appropriate clothing for water sports, including trainers and a change of clothing, sun screen and a bottle of water. Reservations: 0698779510.

A day in Walibi with kids

Only an hour from Lyon is the Walibi Amusement Park, with thrilling rides, roller coasters, shows and kids play areas. It’s a perfect family day out and there are restaurants and gift shops. 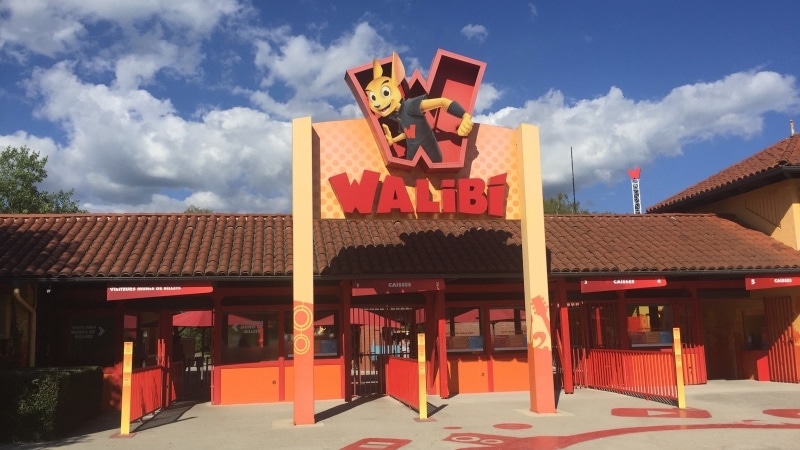 Walibi Park, only one hour from Lyon

There’s also a super water park for an extra €6. The park is open everyday from 10am to 6pm and to get there from Lyon take the A43 autoroute towards Chambery and take exit #10 Les Avenières. Parking is free.

There is a also a special bus which leaves from Part-Dieu train station at 8:30am. Special note: There is a special designated picnic area outside the park.

Martial Arts in the Park

With its origins in the battlefield techniques of the Goguryeo Kingdom, one of the three kingdoms of Korea, it dates back to between the 1st Century BC and the 7th Century AD and incorporates various supports such as candles, balls, bamboo, straw and paper.

It is known for its use of specialised breathing techniques and its particular “dance”.

Restaurant open in August in Lyon

One of the nicest views of Lyon is undoubtedly the outdoor terrace of Au Temps Perdu restaurant in la Croix Rousse. Sitting high above the Rhone River with terrific views facing east towards the Alps it’s one of the coolest places to sample some of todays authentic Lyon culture and cuisine with a reputation for hospitality and a very friendly atmosphere.

It’s not uncommon for there to be impromptu live music and its location on a quiet street makes it perfect for a romantic dinner. 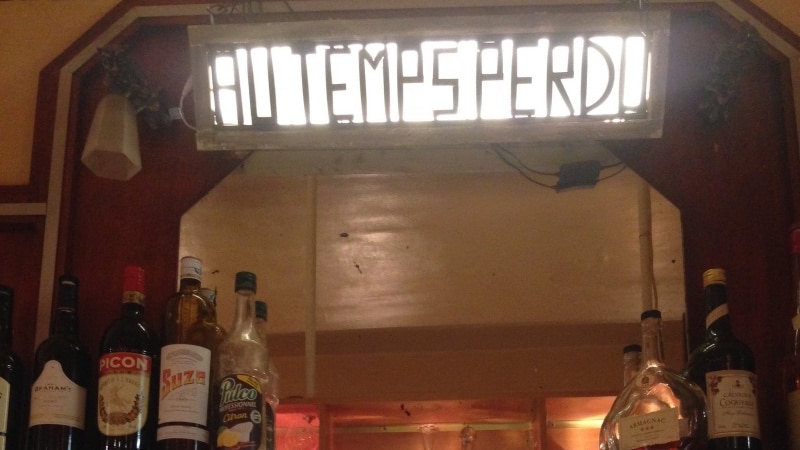 Located at 2 Rue des Fantasques it’s a short walk from metro stations La Croix Rousse or Croix Paquet and it’s open in August from Thursday to Sunday at 6pm.

Your charismatic host and head chef Calou will certainly ensure your evening is one to remember. For reservations: 04 78 39 23 04.

For fans of sport there’s nothing like a good football match and with the first games of the new season taking place in August you won’t want to miss the action.

Lyons new Groupama stadium is located in Décines and Olympique Lyonnais plays against Strasbourg on August 5th and against Bordeaux on August 19th. 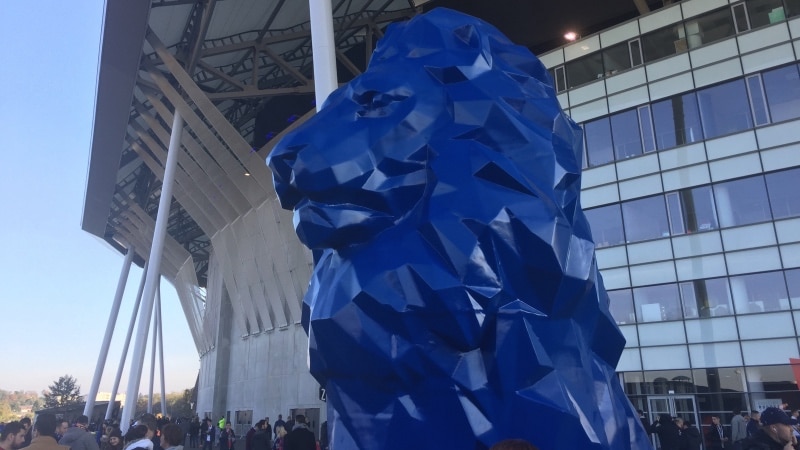 Tickets are available from €20. Stadium visits are also available on Wednesdays. The Groupama Stadium is located just to the east of the city centre at 10 Avenue Simone Veil, Décine-Charpieu 69150 and can be accessed using Tram T3 to Décines Grand Large and then bus 85 to Parc Olympique Lyonnais.

Playing cards in Lyon for the Bridge World Championships

From August 12th to 26th Lyon plays host to the 43rd World Bridge Team Championships with around 3000 participants from 50 different countries.

It’s all organised by the World Bridge Federation and to take part you can register online or simply watch the action and feel the suspense at la Cité Internationale de Lyon which is located next to le Parc de la Tete d’Or at 50 Quai Charles de Gaulle.

Reserve your places for the Lyon Street Food Festival

Don’t forget to reserve your places for the Lyon Street Food Festival taking place from September 8th to 10th at Les Subsistances (Lyon 1). Now in its second year this delicious festival sold out very quickly in 2016 so please get your tickets early to avoid disappointment.