Paul Taylor talks to This Is Lyon

Paul Taylor is very popular for his funny video series What’s up France and What the fuck France on Youtube and Canal+. But the bilingual Brit is also a stand up comedian. He performs his show #Franglais on Thursday, October 12th at the Tobbogan in Décines near Lyon. So we proposed to Paul Taylor an interview in Franglish: questions in French, answers in English..

The audience has been amazing so far, very welcoming and very happy to see me perform in both languages! It’s difficult to say whether they understand all my jokes, but since they laugh, I guess they do!!

French people often tell me after the show, « oh, you know, we are not really good in English, we were not sure we would understand it but we understand it all »! 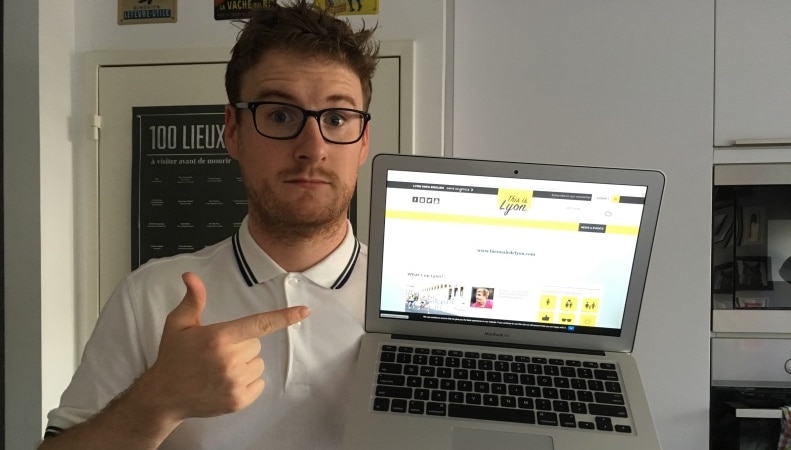 I’d say, because I was used to speaking English to foreigners in my previous job, and also because I’ve been living in France for 8 years now, I probably subconsciously adapt my English to my audience.

Plus since the show is in both languages, and because of the context, even if you miss some things I say you can always get the whole idea.

My audience is mainly French and I live here, so my jokes are mostly about France and French people, there are no cultural references from my country that French people would not understand.

Before I launched the show, I was not sure it would work because I’d been told so many times that French people are terrible English speakers. (And to be fair, when you listen to previous French presidents speaking English, it does not help the stereotype!)

To be honest, French people aren’t so bad at English, especially the younger generation. They usually read and write English really well, and understand most of it.

I’ve pretty much covered everything that makes me laugh in my videos and in my stand-up show.

Think one of the biggest things is the fact that French people use Anglicisms incorrectly. Like the word “smoking” for a tuxedo. It makes no sense and I find it funny when they come up in conversation.

Not much ! Because I lived in so many different places as a kid, I am used to changing to my environment and adapting.

But I would say I miss a pint of beer at a normal price once in a while!!! The prices are outrageous, especially in Paris! My favourite part about going to other cities in France for my show is cheap beer!

I always loved stand-up since I was a teenager. While I was still working full-time at Apple, I started performing at English-speaking comedy shows in Paris and it worked OK.

At some point, I figured that the only way to make it real was to devote 100% of my time to it. So, I quit my job and performed more regularly to build my show #FRANGLAIS.

Before launching it, in January 2016, and with the help of a friend, I recorded one of my most successful bits on stage, La Bise, and posted it on YouTube. It went viral and a few days later, Canal Plus contacted me to work on what would become “What The Fuck France” and now “What’s Up France”.

Contrary to what most people think, I started performing on stage a long time before my videos (3 years). Stand-up is my primary job.

TV and videos are a plus. Stand-up is a lot more fun because the audience is there in front of me and I can talk to them.

Yes I’ve been to Lyon a few times before, when I worked for Apple. I was there to train the employees who opened the 2 Apple Stores “La Part Dieu” and “Confluence”.

I like this city a lot. It reminds me a bit of Paris with the metro, the arrondissements and the rivers that crosses the city. But the weather is much better, the people are nicer and the food is better!

I’m thrilled about it! I wouldn’t say it is because there are more and more anglophones in France, but more because stand-up is starting to become popular and because stand-up originated in English-speaking countries, more people are trying to perform in English.

The best stand-up comedians are anglophone in my opinion, like for instance Louis CK, Bill Burr, Jerry Seinfeld, Ricky Gervais etc. and thanks to Netflix and the Internet, their performances are more and more available to the French audience, who seem to like it and are interested in seeing a live show.

To have a beer and a laugh with a mate.

So I can prove that your level of English is better than you think.

Because I’m only in Lyon once!