Home » Things to do » Editor’s choice: things to do » The Rabbit Hole: a play with English subtitles at Lyon’s Célestins Theatre

The Rabbit Hole: a play with English subtitles at Lyon’s Célestins Theatre

On September 29th and 30th  2017, as well as on October 1st, English-speakers have a unique and heart-warming opportunity to see the Rabbit Hole – a play adapted from Pulitzer-prize-winning David Lindsay-Abaire by none other than Lyon’s own Claudia Stavisky, the magician of mise-en-scène of Celestins Theatre – with English subtitles whooshing about the stage, enabling them to gawp at what five French actors can do on a few square metres of wood.

The subject is mourning – the suffocation, the no-ended darkness, the flickers of light that may fail to come once you’ve lost a loved one. A tough subject, teeming with humour and humanity. 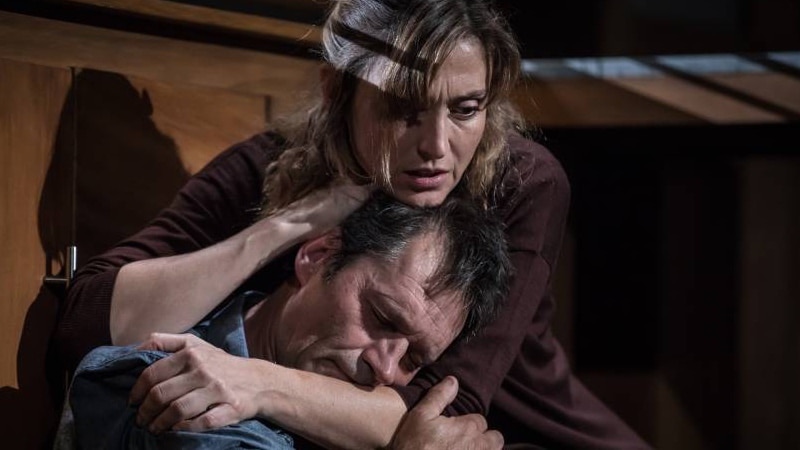 And yes, it’s got Julie Gayet in it, back after 20 years of absence. For those who have never trawled through Hello! in a dentist’s waiting room, she’s François Hollande’s girlfriend. But I’m sure you knew that already…

What is left when someone goes?

Clowns, acrobats and nuns vie for space on the painted stage screen, as people shuffle into their seats made of red velvet. Behind a pair of thick, black-rimmed glasses, Claudia Stavisky, the theatre director and genius behind the play, nods and up goes the screen.

A kitchen. A table. A sofa. A TV. And a fractured family. Four individuals reeling from the accidental death of a 4-year old boy, Danny.

The mother, Becky, a beautiful and somewhat contained housewife, played by Julie Gayet, folds clothes and cleans, boxes her son’s belongings. Howard, the father, played by a raucous Patrick Catalifo, has another coping mechanism.

He wants to see traces of his son – his dinosaur, his drawings on the fridge – he watches videos late into the night of Danny playing on the beach because this is his way of keeping him alive.

A tussle between presence and absence and how to mourn – is there a right way? – pervade from beginning to end. 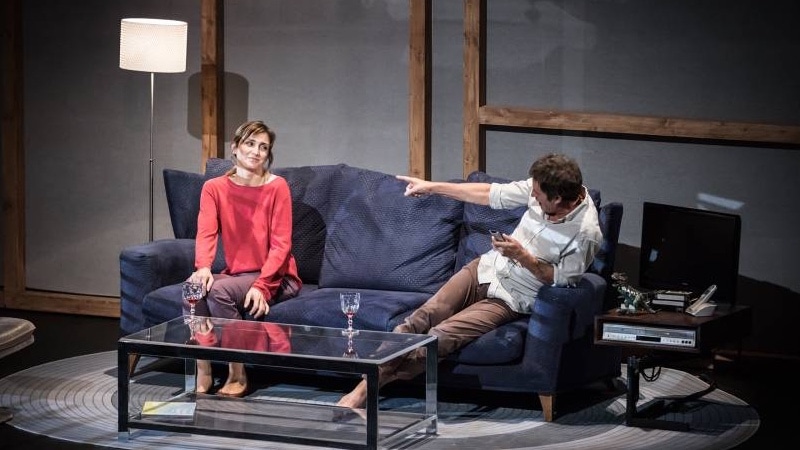 Awkwardness does too. How others, such as Becky’s sister or mother, affected in peripheral ways, will always end up saying the wrong things, but they’ll carry on trying.

Try to fill the blanks with red wine and giggles, memories however disjointed, try to proffer some kind of solace through simply being there. Becky’s mother suggests God – that’s how she herself coped with her own son’s suicide – but Becky swiftly rejects this.

There could be comfort in drastic changes like selling the house. The temptation of having an affair with someone who’s suffering too…

But it ends up being through little things – literature, humour, and dialoguing with the teenager who accidently ran over their son – that pieces can be put together, stitch by stitch.

As Becky’s mother, incarnated by a majestic Nanou Garcia, says in one of the most poignant points of the play, when you lose someone close to you, you get to wear a coat made of lead.

It never ever becomes lighter, but through time you learn to live with it wrapped around you. You may even learn to like it.

Oh, and the subtitles work – you‘re reeled into their world and left dizzy.

He shouts far too much (but alas, there is little nuance in a Frenchman when it comes to expressing anger), but Patrick Catalifo is dazzling. Poor bugger, having to deal with all these women.

At first you think he’s in the driver’s seat, the one who’s mourning the ‘right way’. He comes across as funny and caring, oozing virility, and genuinely ok. But explosions do come. And you see the cracks, the distance he’s still got to go.

He becomes human, not just a man playing the role of a ‘man’ in a household of women. And terribly moving to boot.

I wondered whether Julie Gayet was wooden at the beginning, but then I got to realise that she plays the role of a wooden woman, incapable of expressing her emotions, unreactive to joy (like the prospect of her own sister having a baby) and that she too has to crack at some point.

And she does, and in-so-doing almost grabs the audience by the throat. She’s up against the other three who let it all out, who all come undone, and she offers this all important contrast. Her mourning is more subtle, more secret. It’s her way.

The rock and roll sister, played by Lolita Chammah, daughter of Isabelle Huppert, is the breath of fresh air, at once the child and the soon-to-be mother, jumping around the stage offering hugs and jokes and necessary distractions to all the ambient heaviness.

The most gorgeous bit is when she dresses up in the electric blue shower curtain that Becky has given her for her birthday (any other present than a present for the baby) and she bounces on the sofa like a mad, caped Queen. 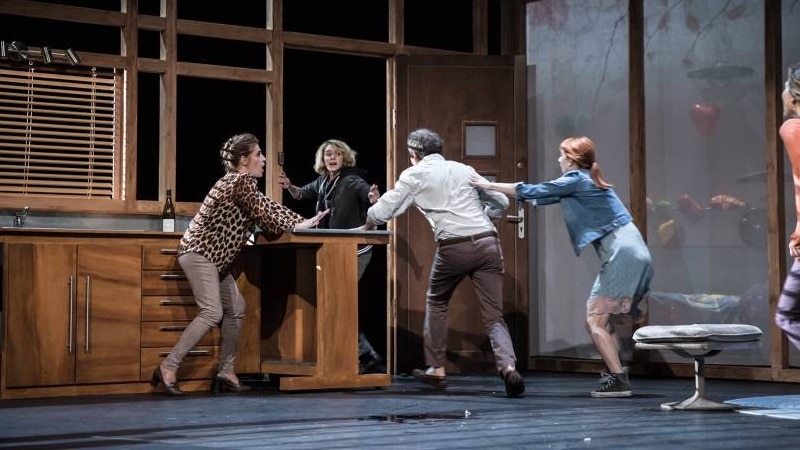 Renan Prévot, who plays the teenage boy, abound with energy and a kind of ethereal whiteness, is a little too hectic to seem credible, but he is lovely in his awkward reaction to Becky’s breaking down. He offers her a tissue, jiggles on the spot, leaves mute. You feel for him too.

But it was Nanou Garcia who did it for me. She shows us what humans are capable of when thrown into such disarray.

She’s there – high-heeled, strong, sexy and exceptionally damaged – and with her deep voice, a laugh that’s never afraid of its own volume, she talks about Danny.  She’s the only one who brings him back to life through words, rekindles memories. A passionate lesson in humanity for sure.

Anyone in the audience who doesn’t admit to thinking about François Hollande when they watch Julie Gayet would be a downright liar, and when they observe her refusing to make love to her on-stage husband, rare will be those that don’t imagine the former president in cotton wire-fronts.

But once you get past that, shake off the Elysée and all its trappings, she becomes Becky, the housewife, struggling to fill the emptiness of her own life. No scooters. No Trierweiler. Niet.

The existential thread that runs through the play comes in the form of a short story written by the teenage boy who accidently ran over Danny.

It’s called the Rabbit Hole and he wants to dedicate it to the four-year-old. It’s a story that quite innocently touches on Quantum Physics and the premise that there are other worlds alongside this one. 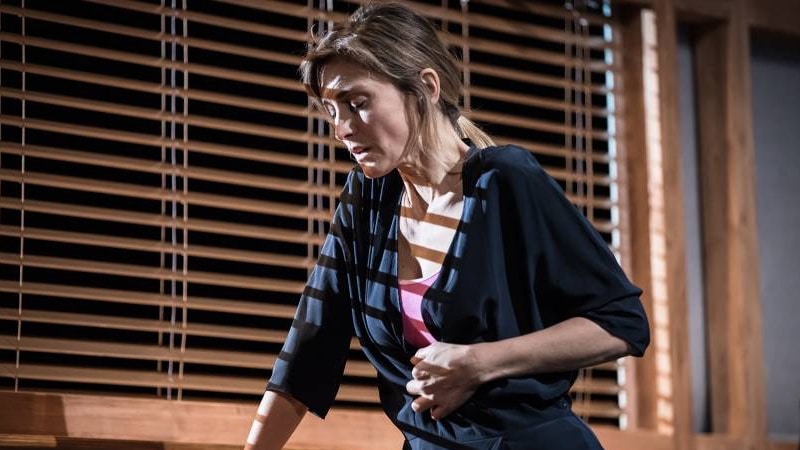 Becky is so captivated by the idea that there might be another version of herself somewhere – a happy and carefree Becky – and that there are other people carrying on their lives in other layers of existence (Danny maybe?) that it gives her that little comfort – that ‘what-if’ edge – that others might find in explanations, blame, religion or the bottle.

Take three goose-pimple moments, five beautiful actors, a layered and mind-blowing mise-en-scène, and a subject that all of us have to face whether we like it or not, and when you walk down the majestic steps of the Théâtre des Célestins you might feel a little more alive than when you went in.