Published: 2019/12/16
“Why do people throw things at the police?”. I softly asked this to a friend on the return trip from place Jean Macé in Lyon after manifesting on the fifth of December 2019. It had wickedly troubled me throughout the day where we both witnessed violence and degradation, been gassed and chased by gendarmes, witnessed moments of levity and points of destruction. I was parts excited and still confused, It needed to be answered if I was to remember the fifth with at least the phantom of a linear structure. These protests could be summarized as just that; a phantom of structure. Fragments of his long reply swim around in my memories, but one line comes to the foreground.

When you’ve been ignored or alienated by your institutions, direct action is your only recourse

We sit as we have many times this year in the fog of civil unrest. Admittedly unexceptional for this age. This strike, a direct result of general distrust in President Macron and his ability to reform federal pensions equitably.

Given the stereotypic ease to strike in this France of 2019, one more battle before another hateful year concludes is par for the course in domestic (un)civil politics. Simple questions of manner and the extent of nationwide turmoil was the only unknown.

Witnessing protests and riots in France to understand

Certitudes: Protestors were to march. Bombs detonated. Stones thrown. Gas deployed. Truncheons to strike their mark. Manifesting is a flat circle of violence and degradation in this country. Your choice at the cusp of this is to join or give it space to dissipate.

I believe this. That it is an exercise in futility to protest something immovable.

Yet those with similar mindsets, in most cases far more cynical & nihilistic than mine, dawn the colors and rally behind the old syndicates, paint and fly the banners and placards, still marshal one another against the unflinching visage of the weatherworn establishment. Doesn’t it seem like a fracture in beliefs?.

Perhaps I go to these protests and riots to witness what my mind cannot explain. Why people who admit they are futile in the eyes of their governance still mount the streets as if they do. For posterity at least, we must bare witness.. 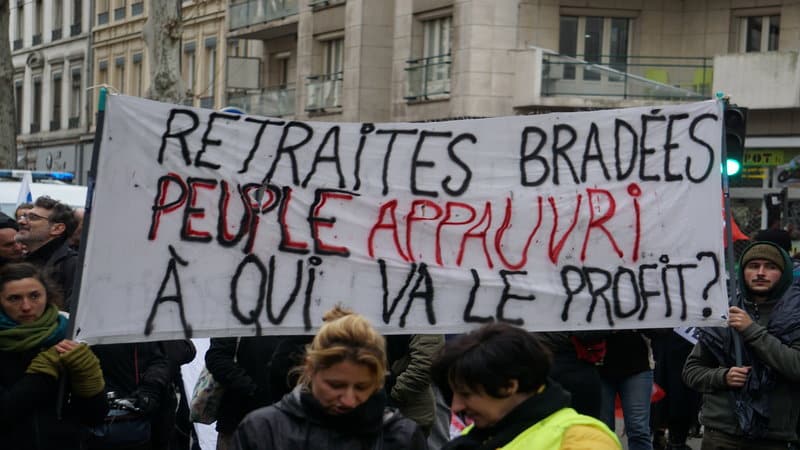 The Manifestation of the Fifth of December on Lyon

It was a filthy morning, the fifth. Seeing the low hanging fog over the Saône while walking to school, blunt foreboding concerning the days coming festivities.

I skipped my last class in preparation and wandered onto the 7th until the march came into view around Saxe-Gambetta. A full 20,00 plus meandering across Cours Gambetta ahead of my companion and me.

Raising a fierce racket as they lumbered through, large trucks with mounted speakers pouring on stanza after stanza of protest chants and propaganda, single color coagulations marking each passing ideological or interest group all waving and yelling towards Guillotière.

A general air of potential shit-kicking floated about with the flare smoke. A man holding one flare looked to me as he backpedaled with his group, “Voilà! La Fête des Lumières“.

A quick skirmish broke amongst the front columns that passed through Guillotière and onto the Quai, in which a weak fade towards China town was met by substantial gas from police on the bridge and just left of Parc Raspail.

Quickly moving the now semi stampede back towards it negotiated route towards Université Lyon 2 and Pont Gallieni. Tediously perched atop an electric cabinet directly following, we watched as the slow current of humanity continued passed the green iron of Lyon 2’s courtyard for near 45 minutes. 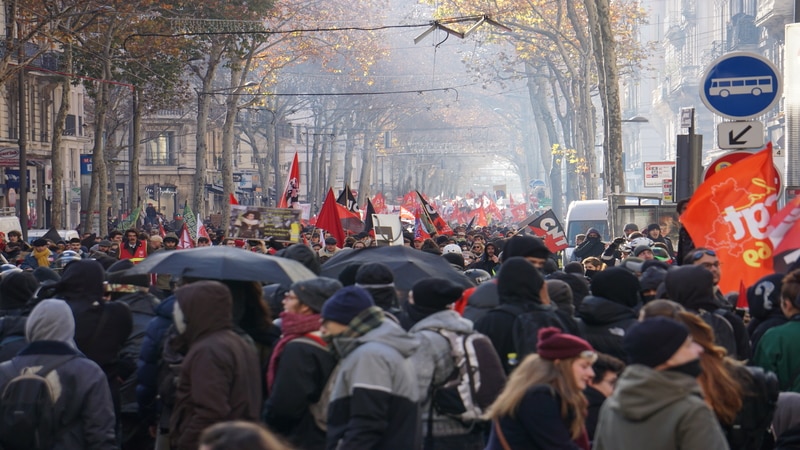 On the War Path to place Jean Macé

In the calm of building protest, we sat for a coffee at the back end of a square side cafe after short-hopping the march and meeting at its planned termination.

Waiting for the trouble to reach us once more, the rapid movement of gendarmes prompted us outside, and to the perimeter line, they were forming. Before it was evident that the anarcho-corps had reached the front, a small group of them rushed the side of the newly formed perimeter, receiving a harsh volley of tear gas in return, pushing us all back into the square.

This show of force seemed to silence the front for a moment, then a minute, as it became apparent, we’d lost strength on the march.

Things began to calm down. Getting a better view, we entered Gare Jean Macé to survey the square, which resembled a block party at this point.

It was the flash beginning I’d expected, yet I hadn’t the answer I thought to find there. But the tear gas had seen to my stuffed nose, for which I was mildly appreciative. My companion and I parted ways at the metro to meet again five days later. 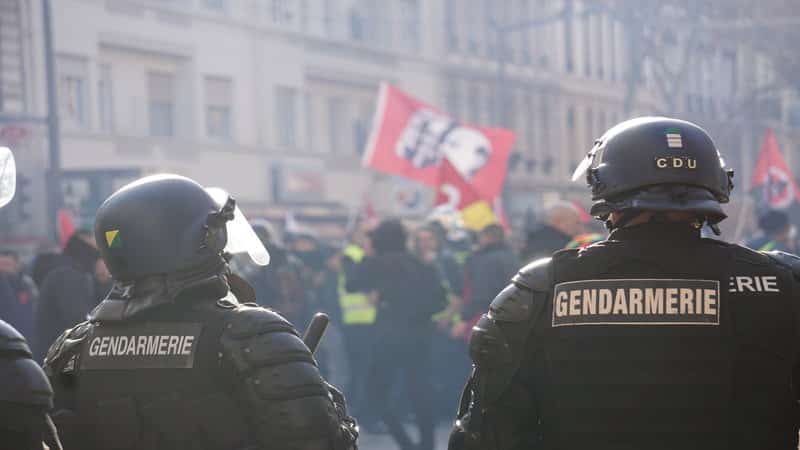 From the beginnings, it was well known that Bellecour had the prospects of a dangerous trap, yet it couldn’t be avoided altogether.

It was open after all, unlike the 5th, and as the Rome of Lyonnais manifestations (in that all marches lead to it.), no one had any plans to pull away and strike at someplace different. All minded their posts and carried forward with a tenacity, which struck me as foolish — an air of respectable defiance in the face of almost religious slaughter.

Through skirmishes at Saxe and another promener through Guillotière, they kept this same attitude and heading, not flinching in their move on Bellecour, Even when met at the Place with a monstrous water cannon and near half the Gendarmes in the department.

And so it was, and so it again will be; They were beaten back like hogs. As they congregated near the northeastern entrance to Bellecour, the Gendarmes allowed them to get near dead in their face before hurling gas pucks down on them, pushing them back into the center of the Place, by the statue of Louis XIV.

Yet they returned, again and again, throwing metal barriers and bottles back at the unflinching black mass, with its cannon moving back and forth like a snakehead. They refused to give way for near 45 minutes. 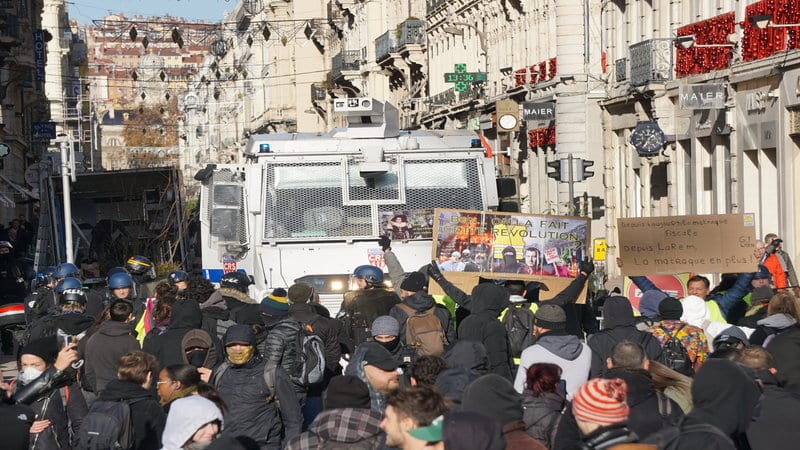 Near the beginning, I was gassed rather ferociously and nearly incapacitated. Dry heaving and hastily emptying a plastic vial of saline directly into my eyes, the lines of advancing protesters rescinded and would surge forward after a moment’s hesitation— a tide trying testing at the line of shields.

When my eyes finally cleared and I could stand, the blowhards had entered Bellecour with their microphones and flags, and the front had finally broken and acquiesced into the coming group of more passive protesters.

Gendarmes never ceded ground to give the protesters room to breath, they stayed motionless throughout the speeches and chants as the whole march settled in. Staring blankly and without relenting. But they didn’t need to be there any longer; the protest was over. Nothing eventful followed that afternoon as the masses retired for the evening. 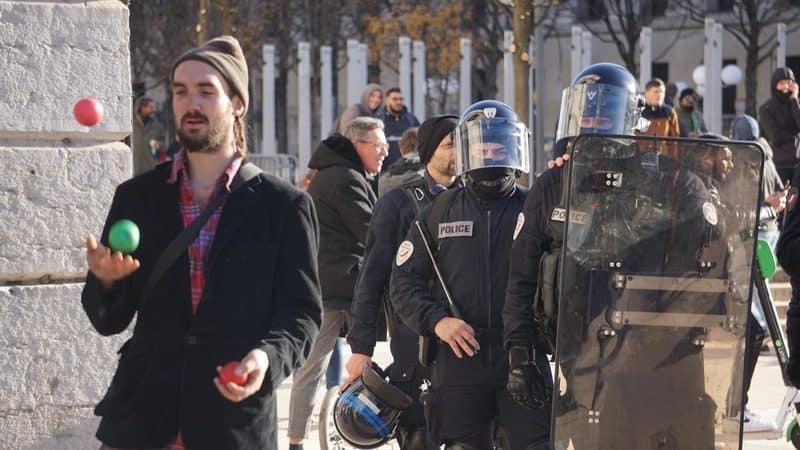 Why do people throw things at the police?

Having been to both major manifestations thus far for this strike, I still do not have an answer to my question.

Why do people throw things at the police? Or rather, what drives people to violence?. It’s possibly little more than a physical repose to a feeling of dislocation from one’s governance, or merely a chronic distrust in the system of governance’s ability to positively improve domestic life.

It resembles at times the squalls of a screaming baby, but who wouldn’t, after getting over the annoyance of a child screaming, pity the thing?

Regardless, the circular characteristic remains, and I simply cannot point towards sizable progress brought thus far by the strike in any direction.

This is now more expression of exasperation than a movement, which is as unremarkable a transformation as larva to butterfly. Of course, that’s what would happen, and presently always has.

If anything, it cements with me the view that we live in a post-historical landscape, wherein nothing is new, and nothing can become new — purgatory on earth.