Published: 2019/12/11
24-year-old Fabio Wibmer, renowned Austrian urban free rider, made a debut of sorts in the northern arrondissements of Lyon, dropping a beautifully insane video of himself last week. Gliding through Lyonnais streets with what appears like the greatest of ease and bombing every hill wherein, with only the sounds of chain clinking, air whistling, and large metal orbs clanging in the background.. 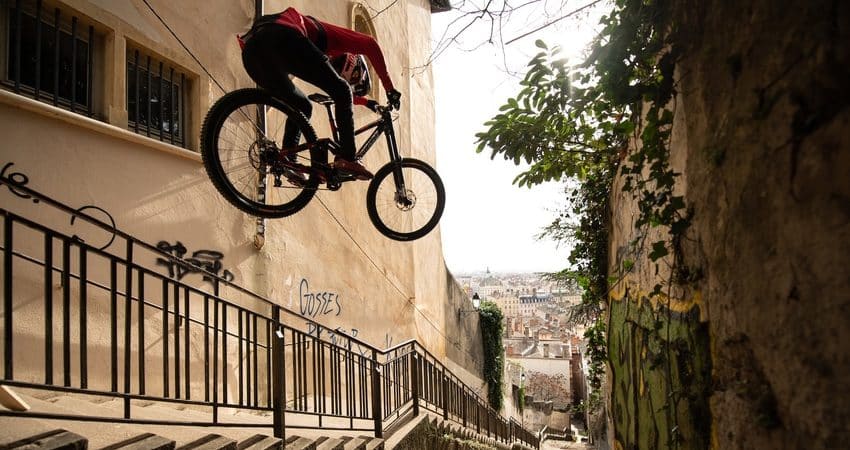 Through the unmistakable streets of the Croix-Rousse, the famous Lyon 25 stairs at Cité Internationale (The Spanish Steps of skateboarding, famously attempted by Swedish skater Ali Boulala, later made by American Aaron “Jaws” Homoki), Fourvière’s foothills and The Ancient Romain Theatre of Fourvière, before going down into the Presqu’île.

“Lyon is one of the sickets places for urban free riding”

All the way bounding down immense steps and staircases, not usually the scenes of such savage biking. Quoted in Pink Bike magazine on producing the video, ” Shooting in France with the boys was good fun, but not always that easy. We surely had a few risky and gnarly situations to master. “.

“Lyon is easily one of the sickest places for Urban Freeriding which made it the perfect playground for my new video”, Wibmer said on his Facebook page.

The Austrian joined Redbull as a label rider in 2017, touring over Germany, Austrian, Canada, and now France. He’s also a member of Samsung’s Team Galaxy and has completed several videos with the Austrian branch of the production company.