Home » Breaking News » Breakfast in a Stadium with 1000 People: the Great Lyon “Mâchon”

Breakfast in a Stadium with 1000 People: the Great Lyon “Mâchon”

Discover the longtime tradition of the “mâchon Lyonnais”

Does saucisson chaud and red wine sound like a strange breakfast? In Lyon it’s a tradition called “mâchon,” and on April 28 the LOU Rugby team is bringing a “mâchon géant” to their stadium with 1000 guests.

In Lyon, you can enter a restaurant around 9 a.m. and get an unusual breakfast full of all the typical dishes of the city: andouillette, tablier de sapeur, viande au vin, saucisson chaud, you name it and they’ve got it, all served with Beaujolais or Cote du Rhône wine.

The “mâchon”, a local culinary heritage from the Canuts

Even if the majority of Lyon residents are drinking coffee or tea at that hour of the morning, there are still dozens of restaurants who offer this traditional mâchon, also called the breakfast of the canuts or the “brunch Lyonnais.” 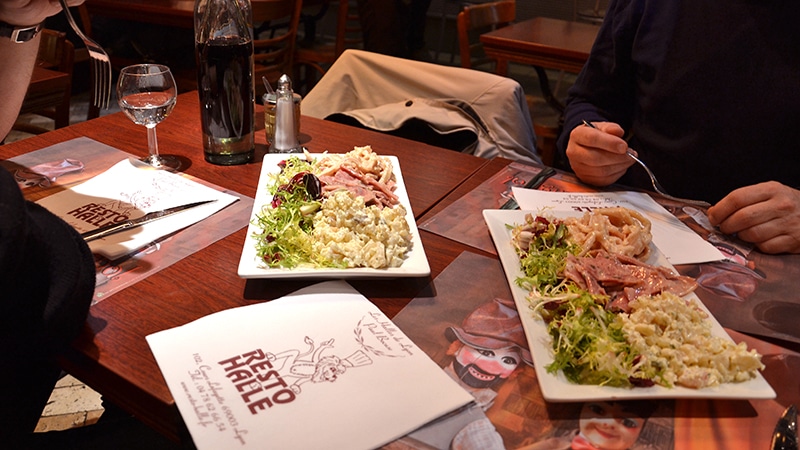 There are also two restaurants in the Halles de Lyon Paul Bocuse, the restaurants Chez Yannis Rousseau and Chez les Gones, that do mâchons for early birds or night owls, instead of croissants.

This odd tradition goes back to the middle of the 19th century. The canuts of Croix-Rousse, the independent silk workers of Lyon, got up early in the morning to work. Towards 9 a.m., they would take a break with other workers around a large meal.

Many restaurants still serve “mâchon” in Lyon and in Paris

“In the 20th century, work habits changed and the mâchon nearly disappeared. But it survived. Today it’s not really a habit so much as an occasional indulgence,” explained Olivier Robert, vice president of the Association of Francs Mâchons (a reference to freemasons). 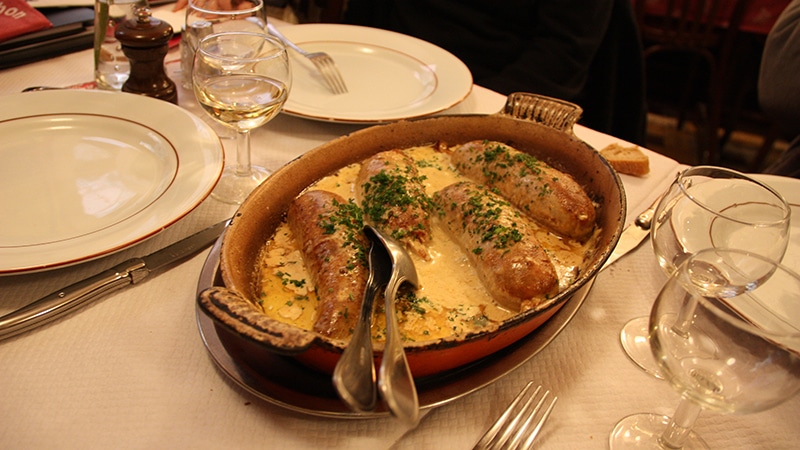 Mâchon with andouillette in Le Petit Bouchon Chez Georges (Lyon 1) where the Association of Francs Mâchons was founded in 1964.

In 1964, this association launched a mission to save this local culinary heritage. Each year, it awards certificates to the restaurants who organize mâchons, in Lyon and the surrounding area but in Paris as well (full list here).

The group also organizes big events, like a mâchon organized in 10 different restaurants at the same time, held every September.

A Great Mâchon in a Rugby stadium in Lyon

The Association of Francs Mâchons is participating on April 28 in the LOU Rugby‘s Grand Mâchon, organized at Matmut Stadium as a charity event to benefit the Prader Willy Organization. 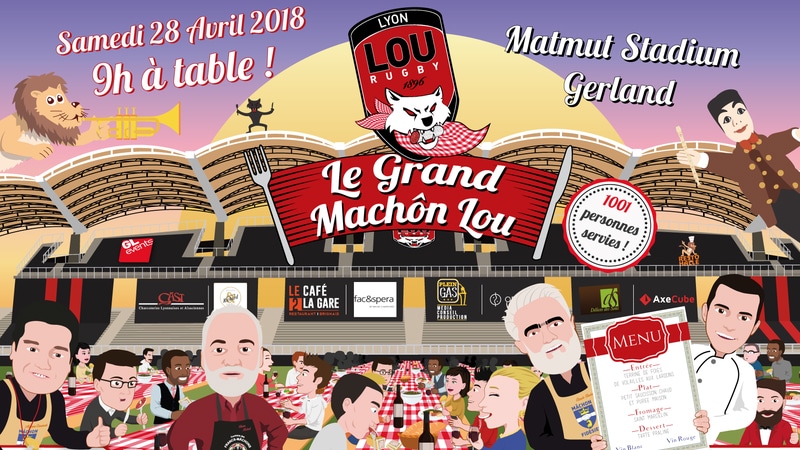 About 1000 people are expected for a meal prepared by Yannis Rousseau (Resto Halle) and Claude Barbet (Café de la Gare, Brignais), two specialists in Lyon cuisine and the mâchon tradition.

On the menu is terrine de foie de volaille au lard, saucisson chaud and purée, Saint-Marcellin cheese, tarte praline, and wine, for €26. The meal will run from 8 a.m.-12:30 p.m., to be reserved here.

It’s a great opportunity to discover the longtime tradition of the “mâchon Lyonnais.”