Vignerons in the Coteaux du Lyonnais region at one time planted a peach pit at the end of each row of grapes.

The baby peach plant, delicate and capricious, prey to the whims of whatever was floating in the wind, would be the canary in the wine maker’s coal mine. 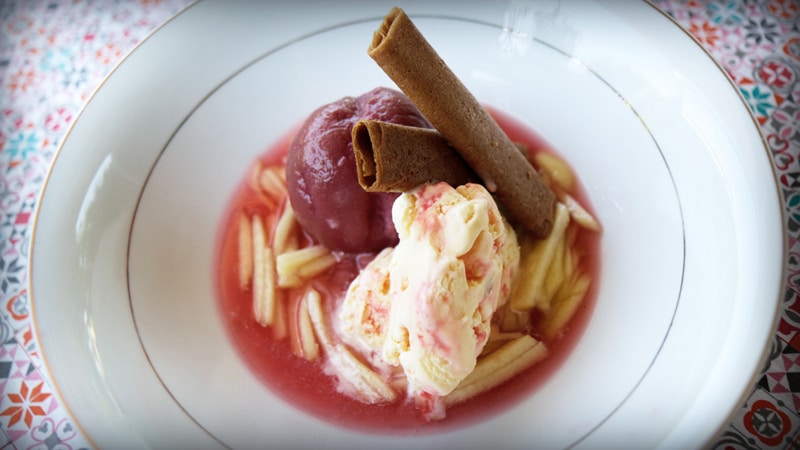 Origins in the Coteaux du Lyonnais

It was the plant that would show signs of any sickness or infestation long before the heartier grape vines would be in distress.

“La pêche de vigne” is a variety of peach that originates from these peach plants, local to the Lyonnais region.

This kind of peach is identified by the deep red color of its flesh and the fruit’s thick beige fuzz covered skin. Today the fruit is produced in orchards, and through a selective process, fruit growers of the Rhone Valley have come to offer larger fruits than were originally found on the trees among the vines.

If you visit the vignerons in the Coteaux du Lyonnais, be sure to keep an eye out for the peach trees found on the grounds of the old estates.

The fruit that these particular trees bear is no doubt la pêche de vigne, and are the product of several hundred years of local history.

Nowadays, they a French favorite and are farmed alongside the peaches, plums and apricots stretching much further abreast, as this peach offers visual interest as well as delightful flavor.

Sometimes referred to as pralines roses, they are a signature sweet here in Lyon.  They are as hard as pebbles, so be careful of your teeth the first time you put one in your mouth.

As you savor it like hard candy, it will soften up enough to chew after a few minutes, releasing a toasty sweet almond burst of flavor.

When you peruse the display windows of the bakeries around Lyon, you’ll often see a bright pink or red colored tarte called la tarte aux pralines lyonnaise, made by melting down the pralines with cream to create a soft filling for a tarte, or brioche or yeast-risen galettesor brioche with red pralines layered into the pastry.

At Daniel et Denise, a popular Bouchon in Lyon, their signature île flottante features a coulis made from la praline lyonnaise.

Where to get Pralines Lyonnaises

You can find sachets of them for sale in grocery stores throughout France, as well as in-house prepared pralines on the shelves in local bakeries and candy stores locally throughout the city.

One of my favorites for baking comes from the bakery on the Boulevard de la Croix Rousse, called l’Atelier des Boulangers.

You can also pick up more elegantly packaged pralines lyonnaises from the local candy-makers, for example Voisin, or sophisticated gift boxes from Pralus or Sebastien Bouillet.

If you find yourself in town, pick up a sack to take home, and from there, a plethora of different desserts can be created from them. 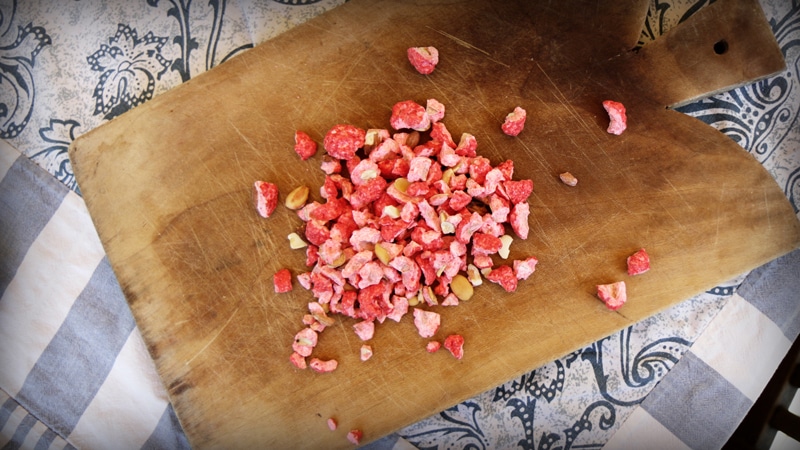 For the Poached Pêche de Vigne:

Fresh fruit or berries in season, cut into thin slices and slivers to support the poached peach, crunchy cookies like a gavotte or cigarette russe

All of the elements of this dessert can and should be made well in advance, even the day before.  It’s a very good dinner party dessert since there is no last minute work except the plating.  You can use any kind of peach for this dessert, as peaches and almonds in general make a wonderful combination. 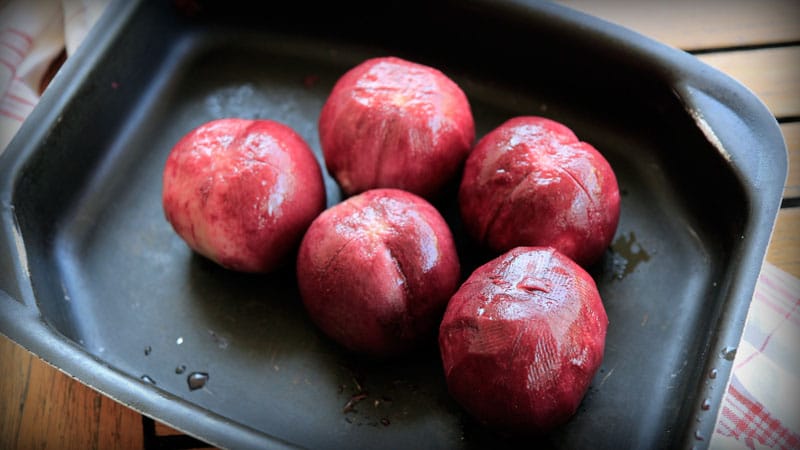 Choose peaches that aren’t ripe to the point of easily bruising.  If the peach is not ripe enough, you will have trouble getting the skin to release.

Too soft, and they turn to mush.  Just ripe enough to give slightly when you squeeze them is perfect.

Peel the peaches, and poach them, whole:

Using a serrated knife, on the opposite end from the stem, incise an “x” that runs roughly one third down the side of the peach.

Do not cut deeply, this should be done by very gently running the knife across the skin, only deep enough to cut just through the skin but not into the flesh of the peach.

Sometimes the skin releases without dipping into simmering water.  Try it.

If the peel of the peach does not easily peel off, you can get the skin to release with the help of simmering water.

Prepare a pot of boiling water and a bowl of ice water.  One by one, plunge the peaches into the simmering water, and count to 10.

Remove them directly to the ice water, to stop the cooking.  Peel back the skin from the peach, and trim the top to allow a flat surface where the peach can stand when finished.

In a saucepan that will hold all the peaches in one layer, bring the wine and sugar to a boil, and allow to boil for 5 minutes.

Add the peaches to the syrupy wine and lower the heat to medium low. Allow the peaches to poach for 15 minutes, then remove the pan from the heat and allow to cool, covered, to room temperature.

Once they are cool enough to put into the refrigerator, chill the poached peaches in their liquid.

Whisk the egg yolks and sugar together in a bowl until light in color.  In a saucepan, heat the almond milk, half of the heavy cream, and almond essence until it begins to steam.

Add about 1/3 of the steaming almond milk mixture to the egg yolks and sugar, and whisk to combine.

Over medium-low heat, transfer the warmed egg yolks and sugar to the saucepan with the rest of the milk and cream.

Stirring constantly, scraping the bottom and sides of the pan to avoid any of the mixture cooking at the bottom, monitor the slowly heating custard.

The egg yolks and sugar will have created a layer of foam that floats to the top of the liquid, which is what you want to watch as you continually stir.

When the cream is almost ready to be removed from the heat, observe that this foam on top of the cream disappears.

Use this event as an indicator that the cream should be removed from the heat soon.  You will also notice, along with steam, a thickening of the cream’s texture, when the spatula is brought across the bottom of the pan, the resulting wake becomes more deep and pronounced.

By that time the custard will “coat the spoon”.  Remove the mixture from the heat, strain the mixture into a bowl containing the remaining heavy cream, and stir to combine.  Allow this mixture to cool completely and chill thoroughly.

At the moment you add the cream to the machine, add a pinch of salt, which will carry the almond flavor.

When the ice cream is ready to transfer to a container for the freezer, do it in layers:  ice cream, then a good sprinkling of crushed pralines Lyonnaises, making sure you get almonds as well as candy, ice cream, then pralines, ending with ice cream.

Keep this in the freezer for a minimum of 6 hours: a full 24 hours is best, as it allows the pralines to soften dissolve, creating pockets of ice cream, almonds, and softened pralines.

Serve the chilled wine-poached peaches on a bed of finely slivered fresh fruit with a quenelle of praline Lyonnaise ice cream and a little crunchy cookie.

You can of course use a little cookie we find at the side of ice cream desserts in the ice cream salons in France, like a crispy crêpe dentelle called a gavotte,or a cigarette russe.