For tea time or le Gouter, this delightful cream-laden brioche hits the spot.

There are many places to get a good galette Bressane in Lyon, which is kind of like a sugar and cream topped flattened brioche, light and fluffy but possessing a cake like moistness, deliciously filling and delightfully local to Lyon.

From the Flat Country

The galette itself, an institution in local cuisine, has its beginnings in Bresse, the flat country north of Lyon where they raise the lovely blue-footed flavorful chickens and are famous for their excellent butter and cream.

This is the country where La Mère Brazier spent her earlier childhood working on a farm in the countryside in exchange for room and board, as was the custom for children who were a financial burden to struggling war widows. 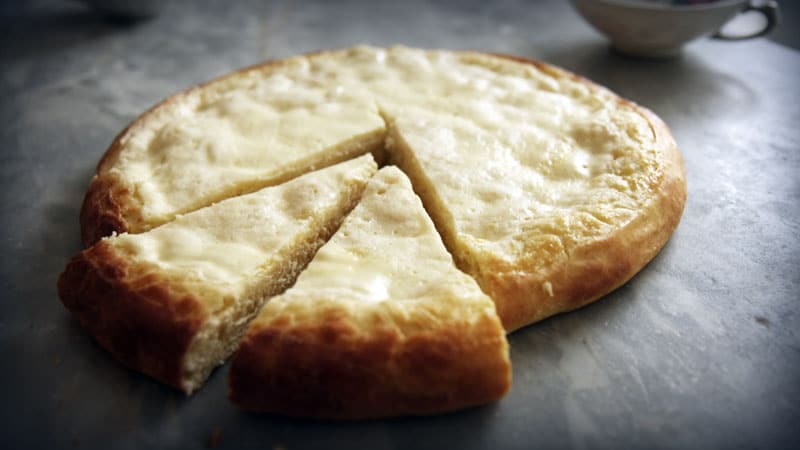 When you drive out of Lyon, North into Bresse country, la Dombes, this galette indeed makes its appearance as the dessert distributed at the end of local village festivals.

I know it sounds terrible, but this was the reality for many children not that long ago.

Destined to become one of France’s most celebrated chefs, she sat on the edge of a field on a frightfully cold morning, her fingers and heart warmed and comforted by a thick slice of a Galette Bressane coming out of the kitchen of the farm.

The memory stayed with her throughout her life, and after building her career and decades of storied dinners under her watchful leadership, she recounts the experience in her memoir.

A Portent of Greatness

Worth standing in the cold to sink your teeth into its billowy goodness now in hopes of being transported to the edge of that cold damp field to catch the thunderbolt portent of greatness?

Try it. Even a blustery spring day in the city will do, as the contrast between the comfort this galette imparts and nature’s elements even in sweater weather is remarkable.

There is a version of this galette that originates from Perouges, which is thinner and more bubbled with burnt sugar than the others, of which you can find an example in town from a seller along Lyon’s producers’ market on Place Carnot on Wednesday afternoons.

Once you have experienced that, you’ll need to head over to Vieux Lyon, where the Boulangerie du Palais produces the more billowy version.

When you drive out of Lyon, North into Bresse country, la Dombes, and scattered through villages in the near Bugey, this galette indeed makes its appearance as the dessert distributed at the end of local village festivals, sliced into wedges and passed down long wooden tables with stumpy glasses of the local wine under strings of lights in the summertime.

The galette has puffed almost instantly to its full thickness in the villages’ communal ovens, lit for the occasion. The galette Bressane is emblematic of the region and is omnipresent year-round nonetheless, at the local bakers.

Ingredients needed for the Galette Bressane 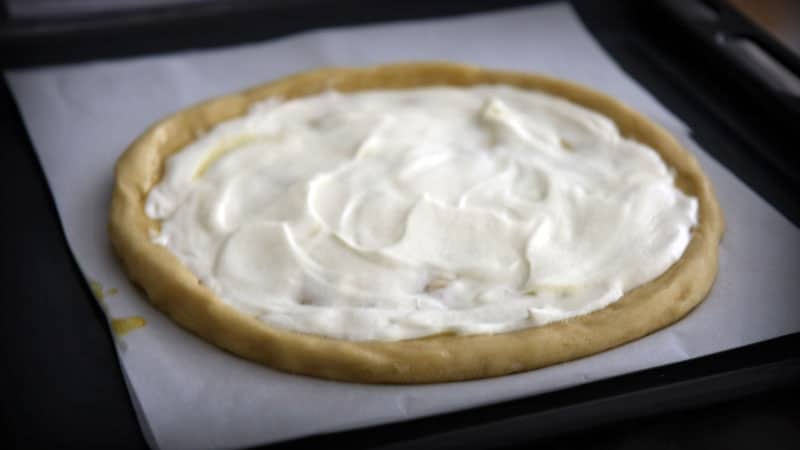 How to cook a Galette Bressane

One day before serving:

Sift the flour into a mixing bowl, add the salt, sugar, and yeast, and work the eggs in one by one.  The dough will separate from the edges of the bowl. 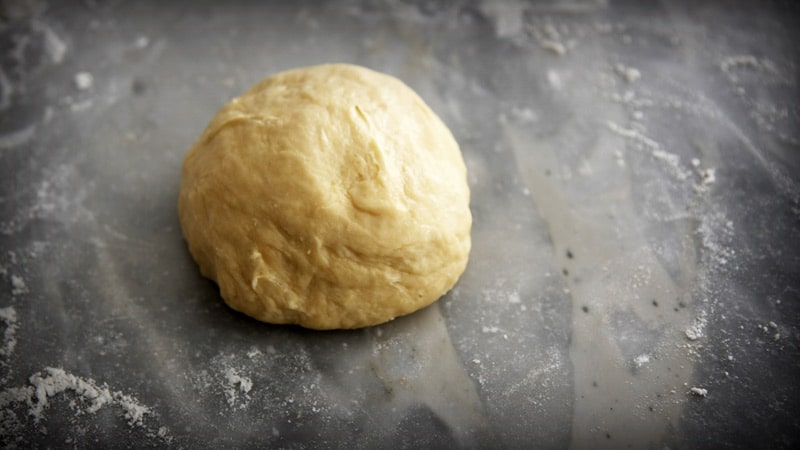 Add the softened butter cut into tablespoons and work it in until a homogenous dough. Leave at room temperature for 45 minutes before covering with a damp cloth and refrigerating overnight.

The day of serving:

Line a baking sheet with baking parchment. Place the ball of dough into the center and press flat by hand to about 1/4 inch thick, and a diameter of approximately 20 cm, or.

Cover with a damp cloth and let rise for 2 hours in a warm place free of drafts.

When the dough has doubled in volume, pinch a border about 1/2 inch or 1 cm high and prick the center at regular intervals with a fork.

Lightly beat the egg and paint the flattened surface of the tarte completely, as well as the interior of the pinched border. Avoid letting egg drip outside of the border, because doing so will keep the tarte from rising evenly in the oven.

Whip the cream until stiff. Fold the sugar into the cream and spread it evenly over the surface of the tarte.

Bake in a very hot oven (230º C / 450º F) 10 to 12 minutes. Verify its doneness by lifting the edge of the tarte with a spatula and checking the color underneath, it should be lightly browned.