Simmered Sausage, a Specialty in Lyon

How to Cook A Clog:  Le Sabodet Lyonnais, sausage from Lyon

The sausage is an institution here in Lyon. Everywhere we look, preserved meats at various stages of maturity seem to call to us. At Les Halles Paul Bocuse, truffled or pistachio-laced Beaujolais saucisson-a-cuire hang in rows, to be simmered to a plump perfection before being sliced with steaming potatoes.

Lucy Vanel, owner of the Plum Lyon Teaching Kitchen, walks you through the preparation of the classic Lyonnais favorite, Le Sabodet (sausage) Lyonnais.

At the Lyon markets, the meat sellers coming down from the mountains call out to us to notice their fresh Diots de Savoie, a perfect addition to hearty soups. Dried and peppered sausages from Ardeche and les Monts du Lyonnais sliced thin as paper are passed around at the city cafes during aperetif hour.

A sausage meant to be cooked

Indeed Lyon’s love of sausage seems present almost everywhere, as is the product of the hunt from the hills and plains stretching from Lyon into Burgundy. They fatten complacent birds for festivals to come, but they also bring tales from the wilderness to the table. 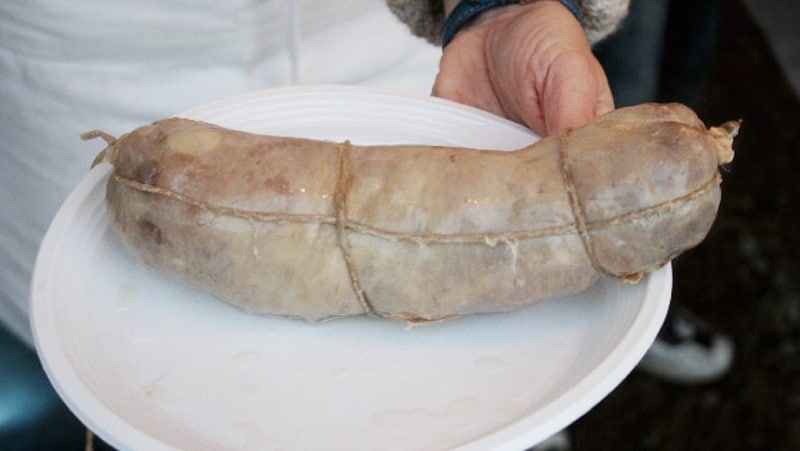 The sausage and sabot are an institution here in Lyon

The sabodet Lyonnais is a sausage meant to be cooked, made primarily from the de-boned pork head, (cheek, tongue and ears) and gelatinous ground skin, or what we call couenne.

One sausage feeds a family of Four

This is a big sausage. Indeed, the average of 400-600 grams, can easily feed a family of four with its accessory potatoes or lentils and a green salad.

It is harness-tied with rather thick string, and is composed of hogs-head, bits of flambéed skin ground to about 8 mm or 3/8 inch in diameter, and a mixture of pork shoulder, loin, and belly chopped in comparatively larger pieces of 1cm or ½ inch.

This is all seasoned with salt, whole peppercorns, nutmeg, crushed garlic, eau-de-vie and red wine.

We often see this sausage swaying in the breeze

Kneaded either by hand or in a turning mixer with a hook, the sausage is then stuffed into large natural casings, tied, and aired at 24 degrees Celsius (70F) for 24-48 hours before it goes to market.

We often see this sausage swaying in the breeze for sale at the outdoor markets, with the best ones often coming from the people who made the sausage themselves, of course. 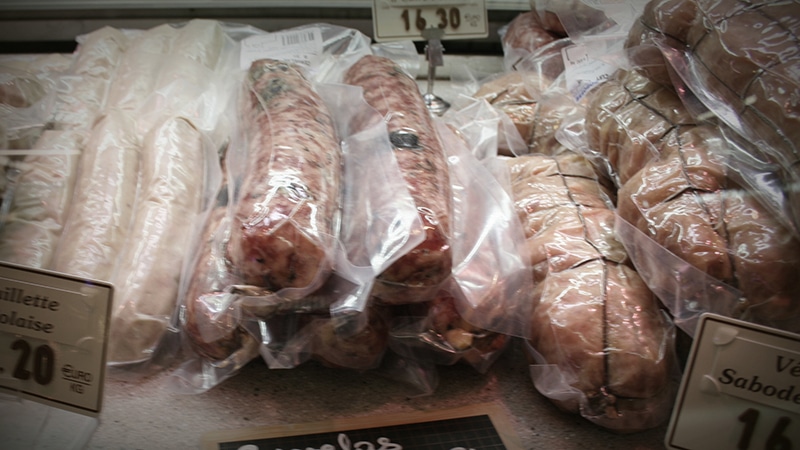 Method to cook a Sabodet Lyonnais

With the tip of a small knife, pierce the sausage at regular intervals to minimize the casing from retracting to the point of breaking during cooking.

Heat the oil with 15 grams of the butter in a pot with a lid that can go into the oven, until the foam from the butter subsides.

While the butter is heating, dust the sausage with flour.  Brown the sausage on all sides, and once browned, remove the sausage from the pan and reserve.

Add the remaining butter, shallots, minced onion and leek and a pinch of salt to the pan.  Cook them, stirring constantly over medium heat until they begin to wilt and release their juices.

Add the remaining flour, and stir over medium heat until the mixture begins to brown.  (you can heat the oven at this time, to 210 C / 425 F).

Add the sliced potatoes, season with salt and pepper, and toss and stir to combine.  Add the wine and eau de vie, and bring to a boil.

Add the water, and nestle the sausage and bay leaves into the simmering potatoes.  Cover the pot, transfer to the hot oven, and allow to braise for 1 hour.

Other recipes from Lyon

Lucy Vanel walks you through the preparation of this spring velouté.

The galette itself has its beginnings in Bresse, the flat country north of Lyon.