Lyon’s Intercontinental Hotel Dieu is attracting locals as well as tourist, thanks to its tributes to its past life as a hospital and it Lyonnais cuisine, with a twist that’s made for sharing.
By Katy Dartford

It’s said that one out of every three Lyonnais was born in the Hotel Dieu, which became an actual hotel in June this year after it ended its 800 year tenure as a hospital in 2010.

That was also the year that the ‘Gastronomic Meal of the French’ was added to UNESCO’s Intangible Cultural Heritage of Humanity list, a fitting time then, to revamp one of Lyon’s most iconic buildings, into somewhere for locals, not just tourists, to dine and enjoy. 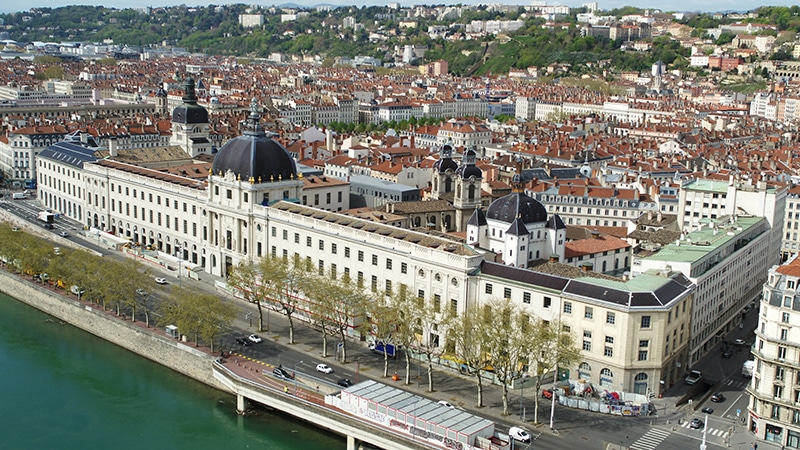 And for many, it holds fond memories. “Several Lyonnais have asked to sleep in the room where they had their babies!” says Marion Sardou, the hotel’s marketing and communications manager.

Grand Hotel Dieu, a former hospital and an historic monument

They clearly have a special relationship with the former hospital which was fully functional by 1454 and became one of the most important in France. It’s why it was officially classified a historic monument in 2011.

I’m told that many of the doctors and nurses who once worked there were moved when they saw the result of the largest private renovation project carried out on a historic monument in France.

Everywhere you go there are reminders of the building’s former function. From the painted wooden beams which were freed from from their concrete shells, the stone floors modelled on 18-century types, to the corridors with their original pillars. Even the lampshades resemble nurses’ hats.

The 300-metre long building has 144 rooms, including 44 suites, half which have a view onto the Rhone and the other half a view of the historic complex and its two domes. Downstairs it is divided into two main areas, its entrance being the former hospital’s entrance, with the 18th-century doors fully restored.

Dining like a Gallic goddess at Epona, Lyon’s Interncontinental restaurant

In the reception is a library of genuine medical books from the 18th and 19th centuries which were found here – although don’t try to read them, clearly doctors’ handwriting was just as indecipherable in previous centuries!

Whilst the building is prestigious on the outside, the interior is simple. Indeed, many of the renovation details are inspired by this dichotomy.

The screens which divide up open spaces in the long, thin building, are decorated with embroidered silk combined with whorls made from the black ropes that silk workers used: raw modest materials juxtaposed with something precious and special. 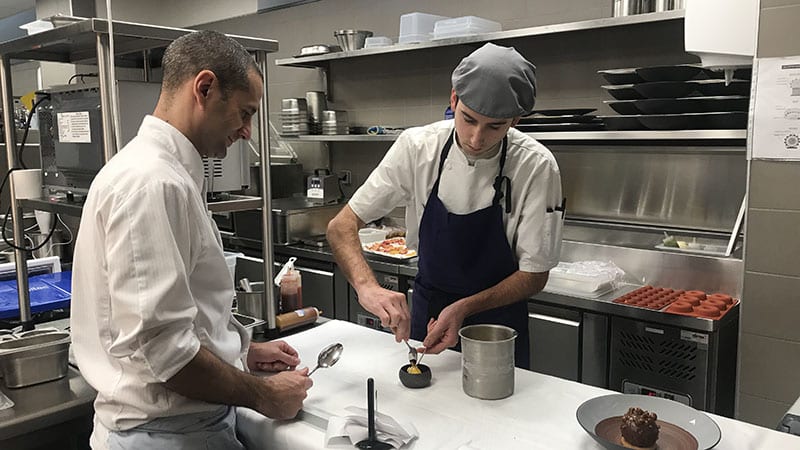 As we head down for lunch, Marion tells me that at least 80 percent of customers at the hotels’ Epona restaurant are locals, making it feel unlike a hotel restaurant at all.

Named after one of the most revered Gallic goddess, the patron saint of travellers and horse riders, Epona is also a nod to the days when the building served as the “Confrérie des frères pontifes” a pontifical meeting-place and refuge for both traveling and local members of the clergy.

We begin with an amuse-bouche, the Cervelle de canut or “grumpy silk worker’s brain.” A specialty of Lyon, but on this occasion, the creme cheese is from Normandy, like its chef Mathieu Charrois.

Lyonnais cuisine with a twist

The Lyonnais cuisine with a twist theme continues, thanks to Mathieu having worked all over the world: after a few years with Michel Troisgros at the Lancaster Table in Paris, he went to Polynesia, then returned to join Yannick Alléno’s brigade in Courchevel, before heading to Beirut, Marseille, New Caledonia and London.

I opt for the 29 euro menu of the day, which changes daily, and my first dish arrives looking like a delicate pastel drawing. An Octopus terrine with Chinese cabbage and a bright green jelly sauce made from fried parsley. 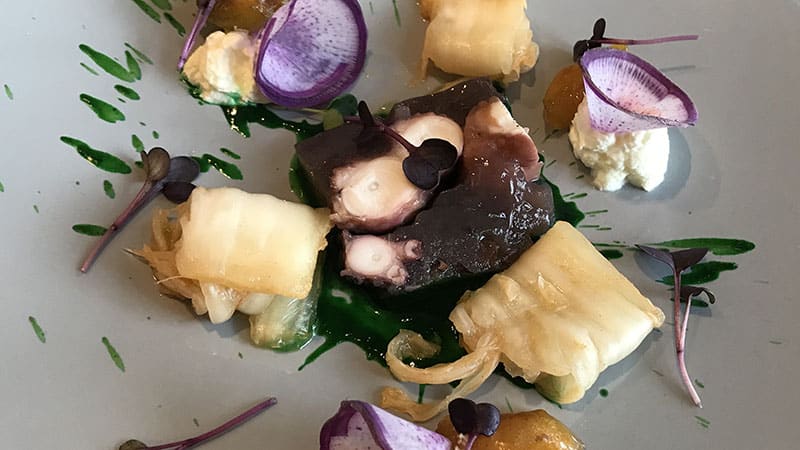 “Lyon can be expensive to eat out,” says Marion “so we made sure we weren’t overpriced as we wanted to target local people. We are not trying to be a Michelin star restaurant, we are always open, 7 days a week and Mathieu also wanted to create a generous cuisine with the idea of sharing.”

Hence the signature dish, the Cocotte – various casseroles, served in a pot, such as fisherman’s catch, poulet de Bresse (France’s most prized chicken) or saddle of lamb.

My main course of beef boiled in beer from the north of France arrives. It’s very melt in the mouth and perfect for a rainy autumn day like today.

K’nelle, a new version of the traditional Lyonnais Quenelle

There is also the à la carte menu which changes every four months. Their signature starter, the K’nelle is a stuffing of white fish with New Zealand spinach and manta crayfish sauce. But this is crisp, not moist all the way through like the traditional poached creamed fish of the lyonnais Quenelle.

Other options include a frog and snail dish but combined with cacao nibs rather than the usual garlic drench, or a Lyonnais style calf’s head and foot with fennel sauce.

But there is also a vegetarian option and everything is gluten-free and local, as they work a lot with the producers in the Halle next door. 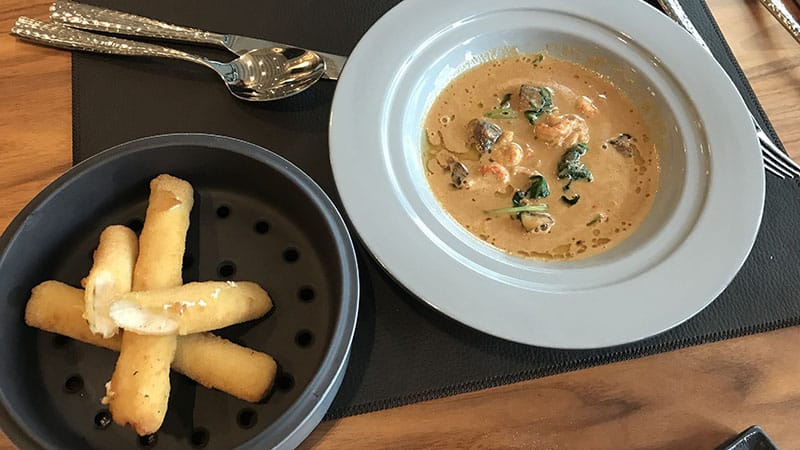 The signature starter, the K’nelle is a stuffing of white fish with New Zealand spinach and manta crayfish sauce.

For dessert, we share a mango curry sorbet within a taco of coriander rice milk with coconut – the patisserie chef is a big fan of India, apparently, and it really works to elevate the mango from being too sickly sweet.

Then there’s the dome-like “Le Rocher”, a decadent ball of Jivara mousse, a runny praline fondant centre and a hazelnut streusel, which I’m told will soon feature on the new afternoon tea menu. After all this I will need a nap, I think.

Drinks under the Soufflot dome in Lyon’s Grand Hotel Dieu

And from one dome to another. A visit to the Hotel Dieu would not be complete without a drink below the building’s iconic 32 metre-high Soufflot dome. Completed in the 19th century, it was partially destroyed in World War II and rebuilt in the 60s.

The Dome bar is still divided into 4 areas, following the shape of the former altar. Around the bar are scriptures of people who bought beds for the hospital, and many Lyonnais can find names of their ancestors on the walls.

At the time it was built, the dome was an advanced technique, like a chimney, to suck out germs and get rid of bad air. And now you can stand directly below it, as rather than putting the bar there, they wanted everyone to be able to gaze up directly under the awesome structure.

And gaze up with a Kiwi Chartreuse Tarragon cocktail I did. Again, combining the old with new, it blends yellow and green Chartreuse with kiwi. Then there’s the signature cocktail, combining Lyonnais pink praline with vodka pink champagne and lemon. Unsurprisingly, it’s been named… the Dome.

Metro Bellecour. Line A and D.

Other Gourmet restaurants in Lyon 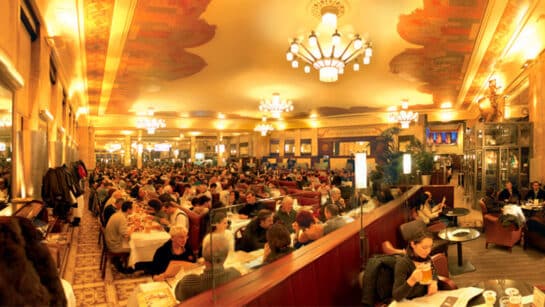 Since 1836 Brasserie Georges is serving the finest food in an elegant establishment: a fabulous place to savour the grand history of Lyon and its impeccable cuisine.

Sitting across the street from the equally majestic old train station of Brotteaux, the brasserie is one of the best examples of Art Nouveau in France.

At Copper Roots, it’s all about the food and cocktails

This new cocktail bar-cum-restaurant will soon be an unmissable part of any trip to the Croix-Rousse.

Creative, fresh and contemporary French cuisine in the 2nd arrondissement in Lyon that embraces simplicity and sharing.