The boule lyonnaise was initiated in Lyon during the 19th century and became an integral part of the city’s culture through the Tournoi de Boules de la Pentecôte.

The Tournoi de Boules de la Pentecôte, largest and oldest tournament of boule lyonnaise in the world, will take place in Lyon for the 106th edition on May 19-21.

Created in 1894 near Perrache, then settled on Place Bellecour in Lyon’s 2nd arrondissement since 1900, the 3-day event has become a hot spot the best players cannot miss and gathers over 6000 participants for the Pentecost every year. 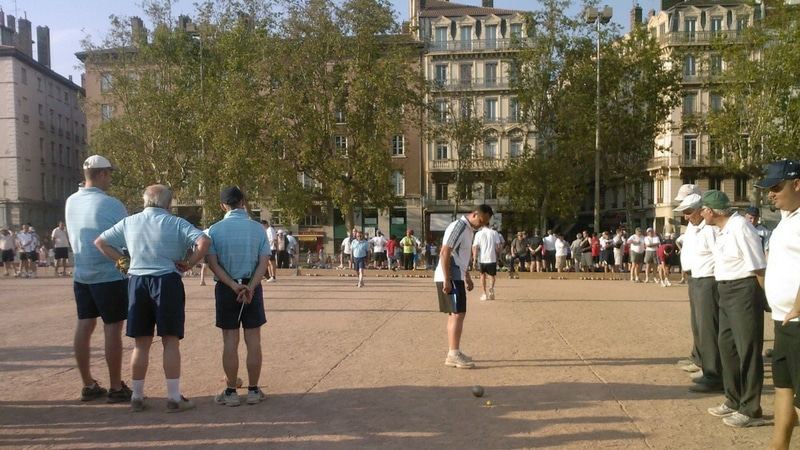 The Tournoi de Boules de la Pentecôte takes place every year for the Pentecost on the famous Place Bellecour in Lyon – Creative Commons.

600 playing fields are spread across Lyon for the tournament, from Place Bellecour to the sporting complexes of Gerland, Parilly and Dardilly, in the suburbs of Lyon.

“Point” or “shoot” with the boule lyonnaise

The boule lyonnaise, called sport-boules since 1981, originated in Lyon back in the 19th century and was recognized as a sport in 1850.

Close to pétanque, played more frequently in the south of France, boule lyonnaise is more competitive than its counterpart. Two teams of 2 or 4 play on a 27,50m field with strict rules.

But in essence, the goal is to score 11 points by getting the boules as close as possible to the “cochonnet,” either by “pointing” your own boules or “shooting” your opponent’s boules.

Boule lyonnaise quickly integrated into the sporting culture of Lyon with the help of the many squares and « clos » constructed throughout the city, in which local residents used to gather and play boules.

The local newspaper « Le Progrès » has partnered with the Tournoi de Boules de la Pentecôte since 1900.

Three days in May on Place Bellecour

12 categories make up the Tournoi de Boules de la Pentecôte as of today.

The men’s and women’s Elite categories, known as the Super 16, are considered the highlight of the tournament on Place Bellecour, with world-class players competing against each other.

Everyone can visit the tournament for free over the three days of competition on Place Bellecour and learn more about one of the most traditional sports of Lyon.